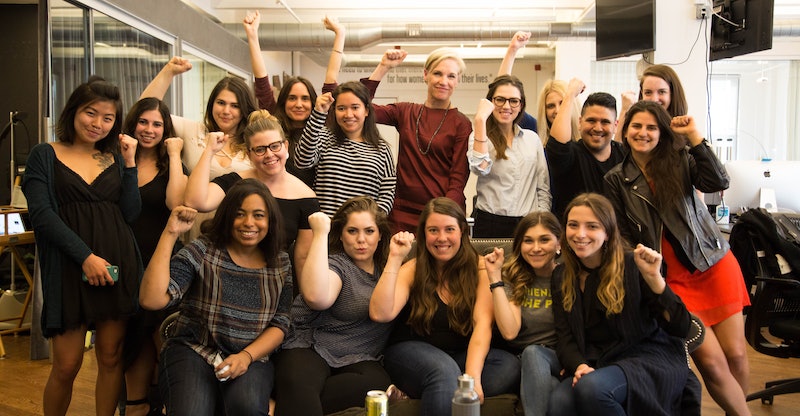 Lauren Betesh/Bustle
By Mehreen Kasana
May 10, 2017

The American Health Care Act passed the House with a slim majority of votes and currently sits in the Senate awaiting revision and, ultimately, another vote. As tensions soar, much has been said about its potential effect on Americans. A Congressional Budget Office report regarding the initial plan painted a bleak future: If the original legislation was made into law, 24 million Americans would lose health care coverage by 2026. For women, the AHCA would be even more devastating; the most singled-out target in the legislation seems to be women's autonomy. In an interview with Bustle politics editor Emily Shire, Cecile Richards shared advice on opposing the AHCA.

Richards is no stranger to hostility. In spite of the AHCA singling Planned Parenthood out by calling to defund it, Richards maintains a spirit of optimism and notes that efforts to suppress women's reproductive rights are an age-old phenomenon that Planned Parenthood is terribly familiar with. Still, it does not deter Richards from leading the organization's mission forward while also sharing advice with others to do the same.

"We're always planning," Richards says. "I wouldn't say this effort by the Republican leadership in the Congress is the first, because we know state after state after state has tried to end access to reproductive health care for women." One in five women have been to Planned Parenthood, Richards notes, so a solid plan to oppose the AHCA is critical — and she's ready.

Richards' advice for people wanting to make sure the AHCA does not become law is centered on actionable deeds any citizen can carry out.

Ever since Donald Trump became the president of the United States, there has been an undeniable uptick in political participation and fervor from those wary of Trump's administration. Speaking of that newfound enthusiasm, Richards says to use that energy and call the U.S. Capitol switchboard — which can be reached at (202) 224-3121. Richards also points to attending town hall meetings, voicing one's opposition to the AHCA, and being unapologetic about the demand for safe and affordable health care for women while speaking with representatives.

"Speak up, speak out," Richards advises. She also explains that in case someone is unaware of what to do, they can text DEFEND to 22422. This text message service from Planned Parenthood allows a person to see what is going on in their area based on their zip code and proceeds to offer actionable advice on what they can do to resist the AHCA.

Apart from calling the Capitol switchboard and attending local town hall meetings and protests, Richards' advice on opposing the AHCA also involves clearing up misconceptions about Planned Parenthood. One of the most consistent strains of misinformation surrounds its funding. Since Planned Parenthood is not in the federal budget, Richards explains, the organization "operates like every other hospital or health care provider in that we get reimbursed for direct services that we provide. About 1.6 million come to us every year for preventive services, and that's what we get reimbursed for."

Another misconception — perhaps the most controversial one — is about how Planned Parenthood finances its abortion services. "Federal funds don't go for abortion services," Richards says. Richards is pointing to the Hyde Amendment, a legal provision that bans federal funding for abortion services. So what will be cut if the AHCA passes? If the organization is indeed defunded, women will lose access to critical health services like Pap tests, breast exams, and birth control.

Richards' advice for opposing the AHCA tackles several fronts. It lays out how to use actual information about clearing up misunderstandings concerning Planned Parenthood's funding. It shows how you can simply use your phone to be heard and how attending town hall meetings are critical to make demands. It even explains how a simple text can give you information on what you can do as a local and how the lack of knowledge about Planned Parenthood needs to be rebuffed in order to go forward.

In spite of the mounting hurdles along with the misinformation and stigma around reproductive rights, Richards still carries hope for Planned Parenthood, "We've been around for 100 years. We'll be around for another 100 years." Amen to that.