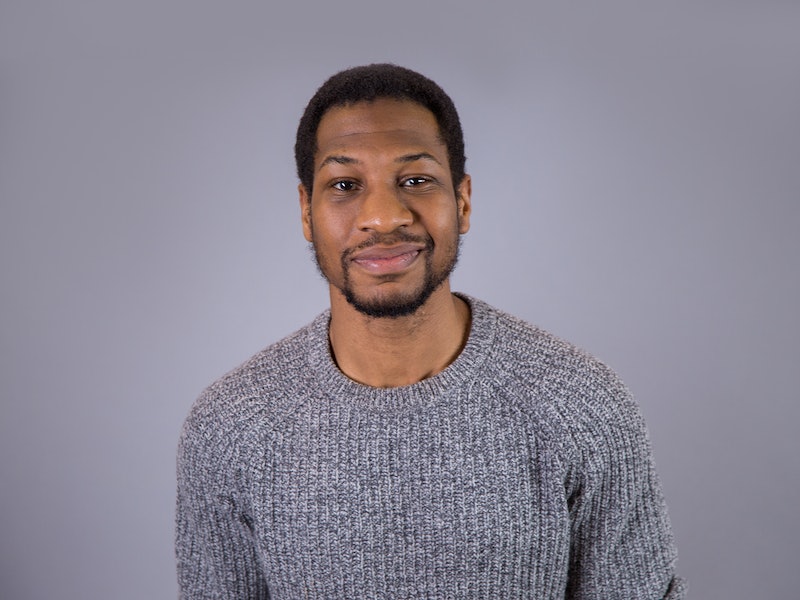 When celebrities come into Bustle HQ in New York, whether it's for a photoshoot, videoshoot, or a Facebook Live, we want to give them the chance to leave their mark. Literally. So we hand them a pen, a piece of paper, a few questions, and ask them to get creative. The rest is up to them. This time, When We Rise star Jonathan Majors is leaving his mark in the Bustle Booth.

Jonathan Majors doesn't have a very long TV and film resume. In fact, his turn as Ken Jones in When We Rise marks one of his first on-screen roles. But if you're going to make an impression on Hollywood, the forthcoming docudrama is a powerful way to do it.

The series comes from Dustin Lance Black, who wrote 2008's Academy Award-winning Milk. Here, Black returns to the fabric that made his magnum opus such a hit, chronicling the history of the modern LGBTQ+ rights movement from the 1969 Stonewall riots to present day. Majors' character, a Black Navy veteran, is ostracized every step of the way: his race displaces him from the mainstream gay community, while his sexuality cuts him off from his fellow veterans and Black peers.

It's a challenging role, but Majors was up to the task, and when he stopped by the Bustle Booth, he revealed he's got even bigger aspirations: his celebrity idol is "Mahershala Ali mixed with Denzel Washington." Before catching Majors in When We Rise when it premieres on Monday, Feb. 27, get to know the newcomer before he becomes a household name.

More like this
'Grey's Anatomy's New Intern Got Advice From Dr. Bailey Herself
By Grace Wehniainen
On 'The Handmaid’s Tale,' Christine Ko Fights Back
By Gretchen Smail
Ismael Cruz Córdova Loves His Elf Ears
By Morgan Leigh Davies
Jonathan Bailey's Latest Role Is A Huge Departure From 'Bridgerton'
By Sam Ramsden
Get Even More From Bustle — Sign Up For The Newsletter