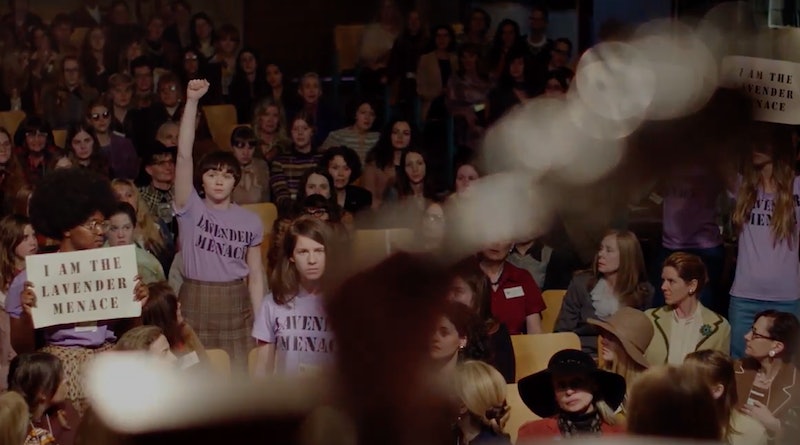 ABC's upcoming miniseries When We Rise was pretty much destined to be an inspiring work of non-fiction, as the story of When We Rise centers around the history of LGBT activists and comes from Milk screenwriter Dustin Lance Black. In a brief interview with The Hollywood Reporter after a limited screening of the first episode of the series, Black discussed the unfortunate timeliness of the show's civil rights subject matter. And at a time when the United States is at a crucial political turning point, the series' story of activism and fighting for all Americans couldn't be more relevant.

As Black put it in his THR interview, “I would give anything for this to be less topical," but topical it appears as the world faces a new, less LGBT-friendly administration and government presence. And while typically, a timely subject matter would seem like a boon for a show hoping to grab viewers, in this case, the current political landscape is an unfortunate reality for Black, both a filmmaker and LGBT rights activist. Yet despite the difficult political circumstances, Black added in his THR interview that he hopes the show will "will serve as an inspiration" for Americans during these tough times.

The miniseries starts in the 1970s in San Francisco, and overlaps with some of the themes and individuals visited in Black's Milk (the 2008 film chronicled the story of the nation’s first openly gay elected official, Harvey Milk, who won a seat on the San Francisco Board of Supervisors in 1977 but was assassinated 10 months later). When We Rise showcases the decades-long fight for LGBT rights, almost all the way up to the present day.

The real-life characters featured in the first episode include Milk's colleague, Cleve Jones (who is also portrayed in Milk), lesbian activists Del Martin and Roma Guy, and gay activist Ken Jones. In the interview, Black recalled his pleasant surprise that ABC was interested in a series about LGBT history at all, explaining that during his childhood, the "family network" was the only channel his conservative Southern family would allow him to watch without supervision. It's a beautiful thing to see the channel currently embrace all sorts of families, and to showcase such an important part of American history. While there are many differing opinions in this country, perhaps this look at the impressive fight for equal rights will bring some hope and understanding to all.

The eight-hour When We Rise premieres on Feb. 27, and the remaining episodes will air the next three consecutive nights. Mark your calendars, because you won't want to miss this.