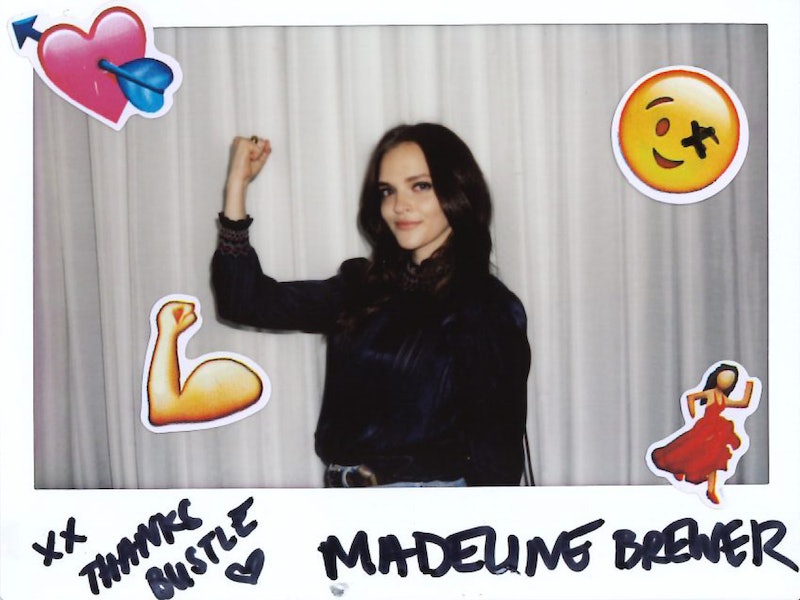 When celebrities come into Bustle HQ in New York, whether it's for a photoshoot, videoshoot, or a Facebook Live, we want to give them the chance to leave their mark. Literally. So we hand them a pen, a piece of paper, a few questions, and ask them to get creative. The rest is up to them. This time, actor Madeline Brewer is leaving her mark in the Bustle Booth.

Man actors' lives aren't so glamorous when they're first starting out, and Madeline Brewer is one of those who've paid their dues. According to Alloy, When Brewer was finished filming the role in Orange Is The New Black that would catapult her career forward, she went right back to waiting tables in New York City. She doesn't have to fill up water glasses anymore. Since breaking hearts as the tragic Tricia Miller, she's gone on to break even more as Janine in The Handmaid's Tale, a fragile young woman with a tenuous grip on reality who breaks when she's forced to give up her child.

But although Brewer no longer has to make a living as a waitress, her time in the Bustle Booth proves that she's still infinitely relatable despite her celebrity status. I mean, I don't know about you, anybody who knows how to draw one of this graffiti "S" symbols that were so popular in middle school is 100 percent cool in my book. Check out the rest of what Brewer felt like drawing and revealing about herself below:

More like this
Tacos Are Chef Kay Kay’s True Love Language
By Maxine Harrison
Nicola Walker’s IRL Husband Is No Stranger To TV Screens
By Darshita Goyal
Laura Tott From 'First Dates' Married Her Long-Term Mystery Boyfriend
By Darshita Goyal
On 'Industry,' Marisa Abela Takes Control
By Morgan Leigh Davies
Get Even More From Bustle — Sign Up For The Newsletter