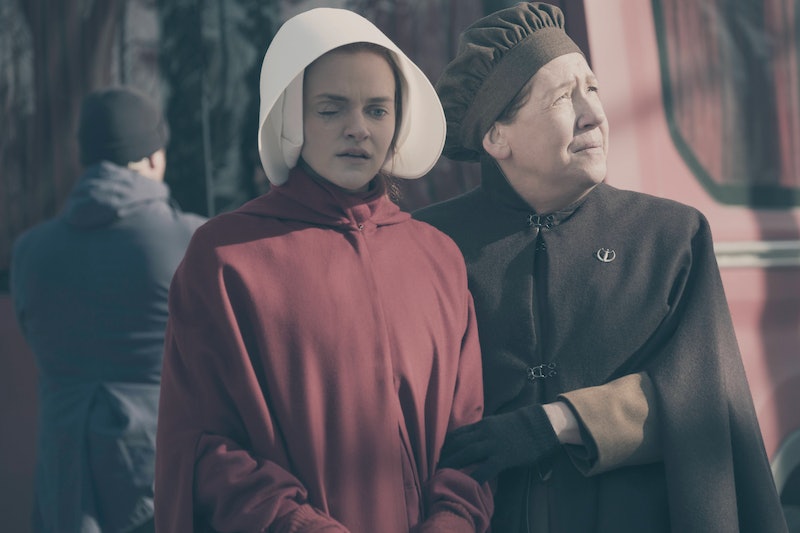 The Handmaid’s Tale is not a kind show to its characters, and for a very good reason; after all, a show about a dystopian, nightmarish dictatorship wouldn’t quite have the same impact it nothing bad ever happened to anyone. Still, it’s hard to prepare yourself for the inevitable moment when a tragedy occurs, even when you can see it coming a mile away. What happened to Janine in The Handmaid’s Tale, for example, doesn’t come as much of a shock considering her shaky mental state, but still speaks volumes about how unsustainable Gilead’s society is.

Janine, you’ll no doubt remember, gave birth to a healthy girl in the show’s second episode, and seemed to suffer under the delusion that she would be allowed to live with her and with their commander in a new family. However, now that the child is old enough, she is instead sent to a new Commander, one who appears to be much wealthier and kinder than the Putnams. The rest of Gilead’s society views this as a reward for Janine; when she is released from her original posting as Ofwarren, her former commander quotes from a passage in the Gospel of Luke where God comes to the Virgin Mary: “For he hath regarded the low estate of his handmaiden: for, behold, from henceforth all generations shall call me blessed.”

This deviates significantly from Margaret Atwood’s original 1985 text. SPOILERS ahead True, Janine is more or less the same kind of character as she is in the TV adaptation; her time at the Red Center has completely broken her down, and even Offred refers to her as a “whiny bitch” during her more smug moments. However, after the birth her child is later found to be a “shredder” or an “unbaby,” meaning it was born with some kind of a birth defect, and is discarded somehow. Janine is almost immediately sent to a new commander after the baby is lost, and Offred loses track of her after that.

Somehow this new Janine’s fate seems even more cruel; bearing a healthy baby means that she will never be sent to the colonies or declared an “unwoman,” of course, but it also means she must give up her daughter. When reality finally take holds and Janine, now Ofdaniel, realizes that she's not as special as she's been made to feel and that her cycle of abuse will continue, she lashes out by attempting to jump off a bridge with the child.

Throughout the series, there’s been an ongoing thread of handmaids trying to end their own lives, although so far only the Offred before June has been confirmed to have done so (although you could certainly argue that Ofglen’s brief moment of rebellion was a sort of Death By Cop, since we haven’t seen her since) While suicide should never be considered a viable option in the real world, when considered in this gruesome fictional context, the logic makes a twisted sort of sense. If you are without hope and you know that your body is more important to your oppressors than your humanity, it stands to reason — however problematic that reasoning might be — that the easiest way to hurt them is to hurt yourself.

Janine might not have been thinking so straightforwardly when she finally jumped off the bridge at the end of the episode, but her actions certainly still had the same effect; even her commander suffers some punishment for sexually abusing her, although it will no doubt be much less severe than what Janine has faced. Afterwards she’s shown recovering in a hospital, presumably in a coma (I shudder to think of what the idea of an unconscious woman with a still-viable womb might inspire in Gilead’s leaders going forward), but it’s unclear what will happen to her going forward.

In the book, Aunt Lydia tells the girls of the Red Center that they are "a transitional generation," and that it will be easier for the handmaids who come after them because they will have no memories of any other kind of life. But Janine, who was happy to conform to Gilead's expectations of her until she realized what they truly entailed, serves to demonstrate that this might not exactly be the case. As long as the government at the center of The Handmaid's Tale chooses to both exalt and abuse its most valuable commodity — childbearing women — then what happened to Janine will always be a possibility.

More like this
See Gregory’s Full-Time Teaching Style In This 'Abbott Elementary' Exclusive Clip
By Grace Wehniainen
On 'The Handmaid’s Tale,' Christine Ko Fights Back
By Gretchen Smail
UK Viewers Will Have To Wait To Watch The Handmaid’s Tale S5
By Maxine Harrison
15 Offensive AF Jokes In 'Friends' That Really Aren't OK
By Tolly Wright, Bustle Editors and Meguire Hennes
Get Even More From Bustle — Sign Up For The Newsletter