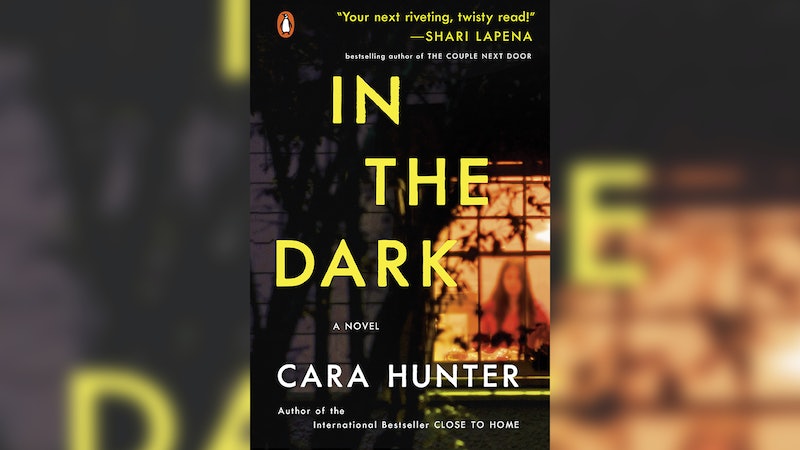 During a routine home renovation of a house on Frampton Road, a quiet residential street in a suburban neighborhood just an hour outside of London, builders have made a shocking discovery: On the other side of a wall shared with a neighboring home, a young woman and a small child are locked in a basement, barely alive. The owner of the house and its only resident — beside the two apparent prisoners, that is — is an elderly man with dementia who insists he has never seen the woman or the boy before. Neighbors are unable to believe something so horrific could happen so close to home without anyone suspecting a thing. And so begins Cara Hunter's latest novel, In the Dark.

Hunter's new book is a gripping suspense novel about misguided assumptions and secrets hidden in plain sight. Inspired by several true crime stories — including the well-known Elizabeth Fritzl case in Austria, in which a woman was held captive, assaulted, and raped by her father for 24 years, as well as the now-infamous Ariel Castro case in Cleveland — In the Dark may seem like it takes readers down a familiar road, but its final destination is anything but expected.

“I think it is very interesting to see real crime turning up in fiction and in TV and film. It’s interesting to see how different people take those inspirations and turn them into something in fiction, and explore them in a different way,” Cara Hunter tells Bustle. "Certainly that is what I found interesting about it, to look at it from a different angle.” In In the Dark, as the author puts it, “not everything is actually how it appears.”

'In the Dark' by Cara Hunter
Amazon

On the case of Hunter's latest novel is DI Adam Fawley, the investigator from her previous novel Close to Home. Farley thinks he understands the circumstances of the crime on Frampton Road, but when he discovers a link between his current case and one from his past that was never truly solved, everything comes into question. Fawley knows from experience that nothing is as it seems, but the truth, once revealed, with have consequences not even he could have expected.

"It’s interesting to see how different people take those inspirations and turn them into something in fiction, and explore them in a different way."

Hunter’s novel may feel familiar for true crime aficionados who have followed cases like that of Josef Fritzl or Ariel Castro, but In the Dark doesn’t quite play out like any news story, podcast, or docudrama you’ve read, heard, or seen before. It may share some characteristics, but that doesn't mean it comes to the same conclusion — which is kind of the novel's point, according to the author.

“I definitely wanted to look at it from the point of view of, what assumptions do people make about something like that, and what might really be going on, and to take these tropes and give them a twist," says Hunter.

But it isn't just tropes or plot points that Hunter manages to twist. She also turns traditional storytelling on its head. Like in Close to Home, the author’s latest novel includes a variety of narrative styles that manage to pull the reader into the story even deeper. While parts of the novel are narrated by Fawley himself, or told through third-person narration, others utilize unique storytelling techniques, including news articles, interview transcripts, blog posts, and more.

While her previous novel Close to Home featured several social media posts, In the Dark includes even more: A transcript from a true crime documentary, which she wrote and formatted like a real script, as well as crime scene drawings which Hunter says were drawn by “a proper CSI,” a friend and advisor of the author who previously worked in crime scene investigation.

It is no secret that some people enjoy that feeling of being in the thick of an investigation, as if they are somehow a part of a crime's story. That is why so many true crime fans don't stop at reading a book about a particular case — they also want to hear the podcast, see the documentary, and watch the fictionalized version in a TV series, à la Dirty John.

“I’ve got a load of response from readers who say, ‘I really like that because it feels like I’m being a detective as well, because I’m being given information..."

Considering how often murder, sexual assault, kidnappings, and other horrendous crimes happen in real life — and how readily available true crime media is available — it's curious how popular crime fiction is now, and always has been. But Hunter thinks there's a reason for that.

“With true crime, sometimes you don’t get the answer of that question we’re talking about, you don’t get to find out why," Hunter says, relating it to the famous Tom Clancy quote, "The difference between fiction and reality is that fiction has to make sense."

"I think that is the thing about reading fictional crime," Hunter says. "There is an unspoken contract between the reader and the writer that that the writer will actually try to explain to you why this happened, or try to get you inside the head of the people involved, so you can try to make sense of it.”

But what exactly is it that crime fiction fans are trying to make sense of? Well, that depends on the story they're reading. In the case of In the Dark, though, Hunter says she thinks it is about understanding how different things can be when you know the facts — all of the facts.

"The process of reading the book is about finding out what those facts are, and not jumping to conclusions too soon," Hunter says. "I think that is something crime teaches us as well, as a genre. The assumptions we make we will probably find challenge if we read through the book, because what the initial looks like is certainly not what it turns out to be.”

More like this
Watch The Trailer For Netflix’s Edgy New Comedy 'FAKES'
By Brad Witter
This Creepy TikTok Trend Encourages Out-Of-Body Experiences
By Kaitlyn Wylde
What Is The Forest Personality Test? The TikTok Trend, Explained
By Georgina Lawton
Anthony Templet Wants To “Live Normally” After Killing His Father
By Brad Witter
Get Even More From Bustle — Sign Up For The Newsletter