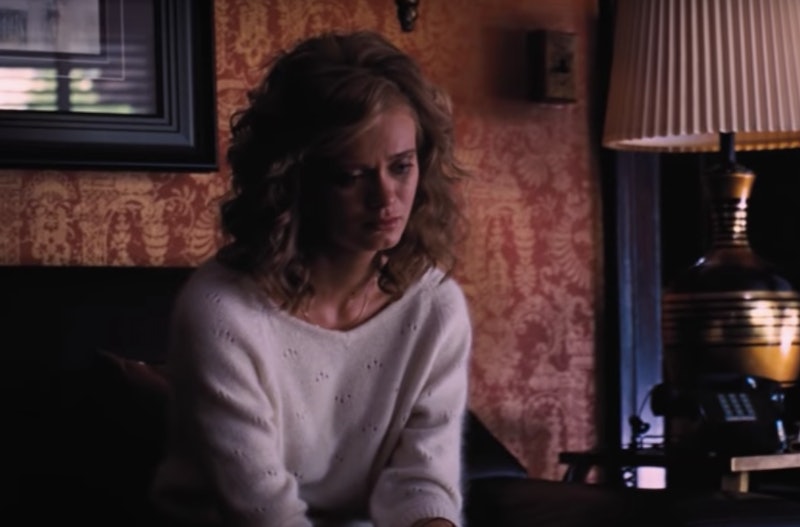 Ten years before Articles of Impeachment were brought against President Bill Clinton in relation to his relationship with then White House intern Monica Lewinsky, presidential candidate Gary Hart's campaign crashed and burned on the heels of his own scandal. The Front Runner, opening wide on Nov. 21, chronicles this watershed moment in American political history, one which may have escaped your notice if you were too young to have experienced the tabloid drama at the time it occurred. In the film, Sara Paxton plays Donna Rice, a young woman with whom Hart (Hugh Jackman) was suspected of having an extra-marital affair, shoving her into a white-hot spotlight that she certainly had not been seeking. Though Paxton didn't meet the real woman in preparation for the role, she was determined to give Rice the consideration and respect she'd been denied in the past.

"You’re asking her to relive the darkest moment of her life," the actor says when we sit down at the Crosby Street Hotel in New York City. "And after 30 years ago, she was portrayed as a one-dimensional person, a caricature, that must be so scary."

It was a relief to Paxton when she read the script and found that Rice, now the president of a non-profit that fights child exploitation, was not simply used as a plot point — the obstacle in Hart's political rise. "I felt that she was finally given the voice that she didn’t have 30 years ago," she explains.

Senator Hart was considered — you guessed it — the front runner in the 1988 presidential race, but he dropped out before the election. Per Time, and as the film portrays, Hart's home was staked out by reporters working for the Miami Herald after they received a tip about the candidate seeing another woman. They spotted Hart and Rice entering and leaving his Washington, D.C. residence. Both parties denied that this was proof of an affair, and to this day, they maintain that they didn't have a sexual relationship and were just friends. Still, both were hounded by the press.

"The only two people that really know what happened are Donna and Gary, and they refuse to talk about it," Paxton says. (And it's worth noting that the movie itself doesn't come down on one side or the other.) "But they were punished as if it did happen. 'Alleged,' but they were given the full punishment anyway."

When she speaks about Rice, the actor radiates empathy for what she went through back then, and for how this movie might stir up those unpleasant feelings. She tells me that Rice was one of the first people with whom filmmaker Jason Reitman shared the movie. "I heard that she loved it, and I heard she was really happy with my portrayal of her so that was like... that’s everything," Paxton says, visibly relieved. "She’s the critic I was most nervous about."

There are a few key scenes in the film that make the difference between Rice being a fully formed presence and not just another (alleged) "mistress" character. In one such moment, she confides to Hart's campaign manager Bill Dixon (J.K. Simmons) that she'd been making choices throughout her life that she thought would ensure that men wouldn't look at her "the way you're looking at me right now." As Paxton says, Rice was an "intelligent, highly educated ambitious woman with agency," who was "proud" of her work as a successful pharmaceutical sales rep. And whether she did what the media accused her of or not, she was reduced in the public eye to being just that. That reduction is something that Paxton has experienced too, with a bit of an asterisk.

She says she "related to [Rice] so much" because she too has felt the pressure to fit into one prescribed, over-simplified "type" or another. "As an actor, you’re always being put in a box," Paxton explains. "People are trying to tell you who you are." But she also sees one key difference: Rice was not trying to be a public figure. "I’m not a celebrity," Paxton says. "I can go to Ralph’s and not have a problem, so I don’t deal with [being hounded in public]. But I’ve made the choice, it’s part of my job. She didn’t make that choice."

Three decades after Rice's life was thrown into chaos, her side of the story is finally being told. And that's long overdue progress. Unfortunately, the "huge question," observes Paxton, is whether or not we're become any more sophisticated and compassionate in our treatment of women involved in controversial circumstances like these. The relentless bullying of Monica Lewinsky and the death threats sent to Brett Kavanaugh accuser Christine Blasey Ford suggest that we haven't. (It's worth noting that Rice tweeted an article alleging Ford's testimony to be part of a conspiracy, though her bio cautions that retweets are not endorsement.) So perhaps it's more encouraging to celebrate how these women have risen above it all, and to look to the future with hope.

"I think that right now we have an opportunity to make that change," Paxton says. Perhaps The Front Runner will sufficiently remind us of a moment in history that we're otherwise doomed to repeat.

More like this
Christina Perri Had No Idea Her 'Twilight' Song Is On YouTube's Top 100 Chart
By Radhika Menon
How Director Quinn Shephard Turned Dylan O’Brien Into A “Viral Weed Blogger”
By Samantha Leach
Angourie Rice Unleashes Her Inner Control Freak
By Jessica Derschowitz
In Rap Sh!t, Social Media Has Main Character Energy
By Aramide Tinubu
Get Even More From Bustle — Sign Up For The Newsletter