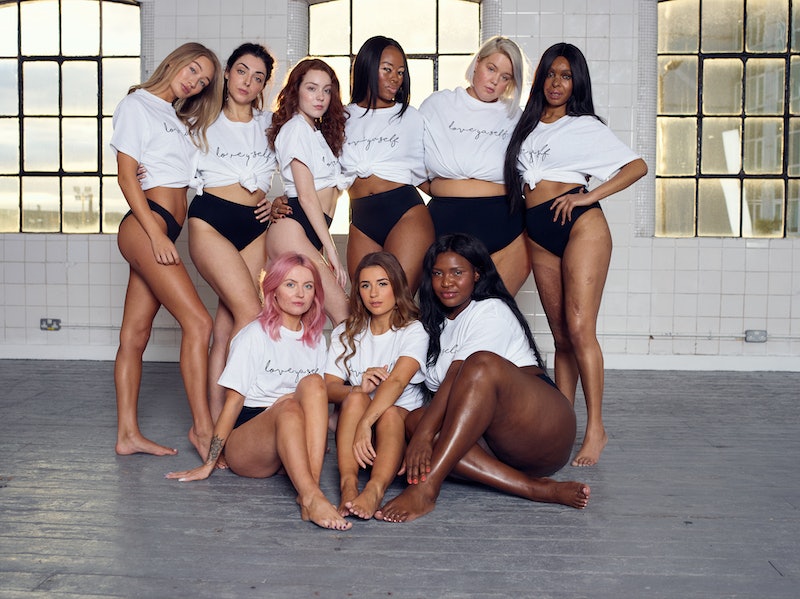 The fashion industry is routinely criticised for jumping on certain bandwagons in order to make a profit. Nowhere is this more true than in the area of body positivity. But while most brands who go down the "no retouching" route only do so for certain campaigns, one British label has made a more permanent pledge. Manchester-based online retailer In The Style is banning retouching and has released a truly diverse campaign to prove it means it.

Both the pledge and campaign form part of the brand's #ITSjustgotreal message. Nine In The Style ambassadors have been chosen to represent the label's new move. Former Love Island star Dani Dyer is among the crowd. The 23-year-old — who previously collaborated with In The Style on a clothing range — is joined by acid attack survivor Naomi Oni, acne sufferer Abbie Bull, plus-size model Netsai Tinaresse Dandajena, body-positive influencer Joey Brumby, make-up artist with vitiligo, Eva Khyne-Sam, and body confidence blogger Nelly London. The final two names are models Bethan Sowerby and Sophie O'Neil.

In The Style has promised to ban retouching across its entire site and social media presence. It will also stop airbrushing images of celebrities or influencers who have been paid to promote the brand on social media.

"As a social-first fashion brand, we are becoming increasingly aware of the impact that editing our images has on our audience," CEO and founder Adam Frisby said in a statement. "This is something that most, if not all retailers and marketeers do, to sell products in 'the best possible way.'

"However, we believe it's our social responsibility to tackle the subconscious reinforcement to women that they have to look like the impossibly airbrushed girls they see on websites." He added that things like makeup and hairspray would still be used on models but "lines, wrinkles, lumps, or bumps" will be left as they are.

In The Style isn't the first brand to join the war against airbrushing. As Fashion United reports, U.S.-based labels such as Aerie and Modcloth have previously announced similar moves. But brands more well known in the UK have tended to hit headlines for banning retouching in certain departments or specific campaigns.

For example, in 2017, people began to notice that ASOS' lingerie and swimwear category was full of images of models with visible stretch marks and blemishes, reports Elle. A spokesperson for the brand confirmed to me that this is in fact a site-wide policy, stating: "We commit to never removing anything that’s part of who someone is, like stretch marks, scars, or moles. We never reshape people’s bodies. We sometimes retouch images to make sure you see products like we do and represent their colours and textures in the most accurate way."

And, as Refinery29 states, in the summer of 2018, it appeared as if H&M had ceased airbrushing its swimwear models with scars, stretch marks, and arm hair all on show. H&M confirmed that its policy states that "little-to-no retouch work should be done on our photography across our product assortment."

Campaigns like Missguided's #InYourOwnSkin have also cropped up every now and then. In early 2018, the online retailer released images of women celebrating things like scars, birthmarks, and other skin conditions, reports Cosmopolitan.

In The Style may not have started the movement, but it has certainly sparked a conversation about the level of airbrushing that still exists in the fashion and beauty industries. Diversity is more than just a buzzword; it's a fact of life. It means showcasing people of all shapes, and sizes, of all colours, and of all skin types. It means swapping the word "flawless" for the word "real".

As for all the other brands out there who are still editing some or all of their imagery? It wouldn't hurt for you to permanently join the party. In fact, you may just find yourself with a whole new fanbase.