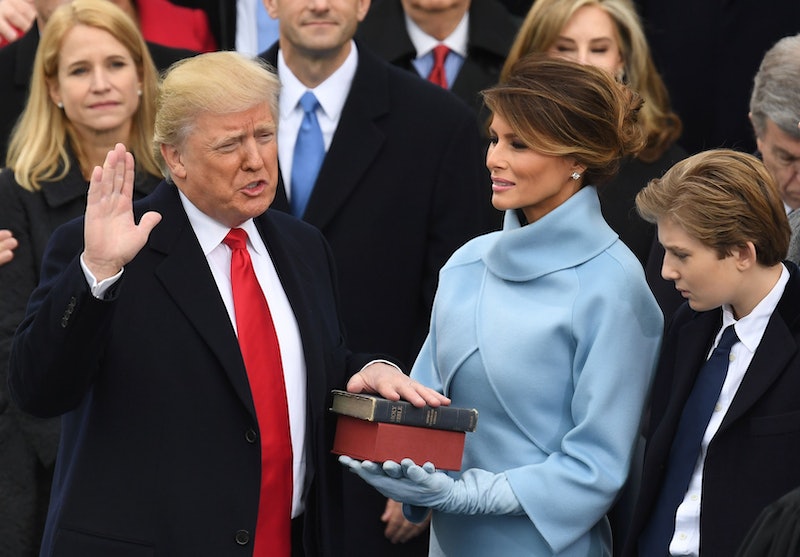 If there's one thing we can always count on, no matter if there's abounding political upheaval or social unrest, it's that the internet will remain the internet. It is unflinchingly that weird, unmatched place where we all congregate together to argue, to talk, and most importantly, to commiserate when we can't quite come to terms with what's happening around us. Case in point, the web is rife with Inauguration Day memes and tweets, and there are no signs of the comical content that is churning slowing down.

Listen, whether you're incensed about the president-elect becoming president, are for it, or are somewhere on the fence about it, these jokes are ones that anyone with a sense of humor can appreciate. After all, if you can't poke fun at yourself and your nation, what can you have fun with? Humor is often what brings even the unlikeliest of people together, and I see the ability to find funny tidbits in the midst of great tension to be both encouraging and refreshing. You know, so long as it's done consciously and tastefully, keeping in mind people's sensitivities at the moment.

Here are some of the best tweets and memes about the inauguration, because the internet is a joke-making machine:

If you aren't laughing, you're wrong.

An Office reference can ease almost any awkward situation.

This Speaks For Itself

Prince Is Being Channeled

Brunch would probably be preferable...

You know what they say about pictures and how they're worth a thousand words? Yep.

Snape Was Never One To Mince Words

A burn is a burn.

I Sense A Theme

An Ode To Bernie's Windbreaker

This is literally a plot point on The Flash.

Too Good Of A Photo Op Not To Meme Multiple Times

Today means a lot of different things to different people, but at least the internet is here to keep us laughing.

More like this
The Trailer For The Whitney Houston Biopic Has Twitter Feeling Heated
By Radhika Menon
Why TikTok Is Flooded With Controversial Videos About "Pick Me Girls"
By Courtney Young
This TikTok Song About An Unrequited Romance Has FYPs In Shambles
By Emma Carey
On TikTok, "Cbat" Has Been Named The Worst Sex Song Ever
By Lexi Inks
Get Even More From Bustle — Sign Up For The Newsletter