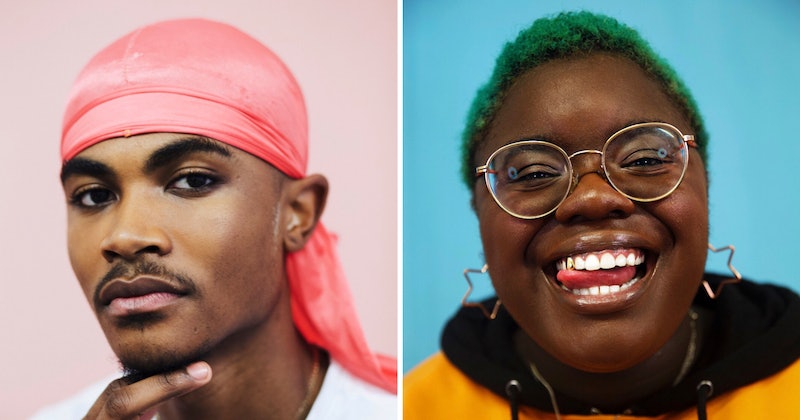 There's a new, inclusive modelling agency opening its doors this April. INC.MGMT will address the lack of diversity by specifically hiring people of colour (POC) and LGBTQIA+ people to be on its books. The modelling agency was founded by queer POC couple Kirby Roseina, a DJ with a background in casting and events, and Nas Connie, a London-born photographer who has been living and working in Berlin for the last year.

INC.MGMT will not only celebrate the intersection between gender, sexuality, and ethnicity, but it will also shine a much-needed light on different skin tones, body shapes, heights, and lived experiences.

As well as that, what makes INC.MGMT so unique is all their clients will be doing their own awesome projects in various creative industries alongside their modelling work. As the INC.MGMT team explains in a statement sent to Bustle:

"With our models’ own individual talents in music and the visual and creative industries, we aim to cultivate a safe space that enables our models to continue exploring these avenues by having a fully integrated mentoring programme to facilitate and nurture their creative interests as well as positive mental health and self-care practices."

Sadly, there is still clearly an absence of diversity in the modelling industry. A shocking survey by the Fashion Spot revealed that, in 2016, only 21.8 percent of the models featured in spring fashion ad campaigns were people of colour. And in the Forbes list for the top paid models in 2018, Joan Smalls was the only black person to make the top 10, with the rest of the list being majority white.

But things may be looking up. In February 2019, the Fashion Spot reported that 9 of the top 10 models at New York Fashion Week Fall 2019 were women of colour.

However, although we may be beginning to see change in one aspect of the fashion industry, the lack of diversity in terms of body shape still needs to be addressed. In their report from New York Fashion Week, the Fashion Spot note that the number of plus-sized models cast for this year actually went down. "A total of 50 (0.69 percent) plus-size models appeared across 18 Fall 2019 runways," they write.

A 2017 survey from the International Journal of Eating Disorders found, of the 85 fashion models they spoke to, "models reported high levels of pressure to lose weight." According to Vogue, these findings then "prompted an open letter signed by more than 40 other models, including Karen Elson, Carré Otis, Caitriona Balfe, and Missy Rayder, that addresses the issues of the study."

It looks as though INC.MGMT will be the breath of fresh air that the fashion world needs. They are directly combatting the problems within the industry by casting a range of models of all sizes, complexions, and genders. On top of that, the agency is taking the mental wellbeing of their models very seriously and encouraging self-care among their clients.

INC.MGMT will be launching in April 2019, and they are proving that diversity in fashion isn't a fad. It's here to stay.