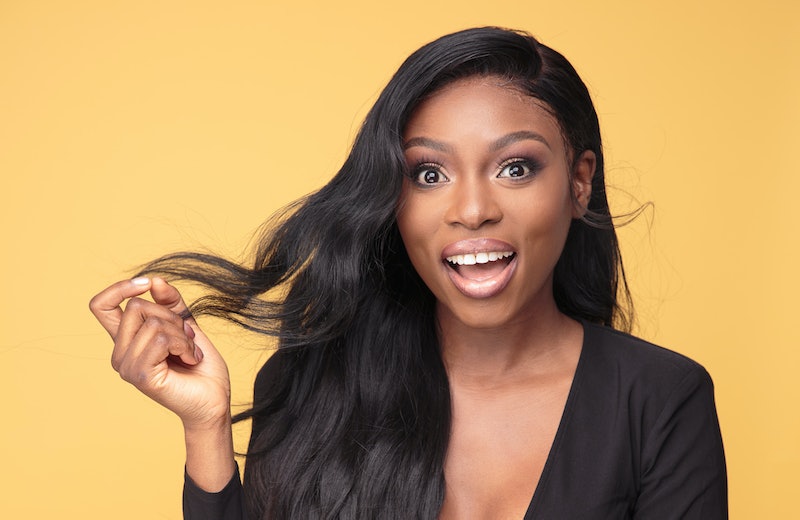 Your favourite YouTube stars might break down their skincare routine, take you on a tour of the inside of their house, or detail the meals they eat in a day, but few let their subscribers in on money matters. Patricia Bright does things a little differently. Alongside Ivy Park hauls and vlogs about the realities of giving birth, Patricia Bright talks finances with refreshing honesty in videos with titles such as "How I budget my £65,000 salary, a year, a month, and more". While you'd be justified in having reservations about taking financial tips from influencers, Bright is more money-minded than most. Before becoming a YouTuber and influencer (with 2.86 million subscribers and 1.1 million followers, respectively), Bright worked in accounting as a business analyst, something she continued to do five years into starting her Youtube career.

Bright has recently launched a podcast — Caught Off Guard — where she continues her frank approach to all things money, as well as chatting to women making moves across various industries. I spoke to Bright about making the jump from a steady job to going it alone and why she believes it's her "duty" to share her financial journey with others. Here's how she makes it work:

Aimée Grant Cumberbatch: Money is still a taboo subject, how do you think we can get more people talking about it?

Patricia Bright: I think when one person confidently talks about it,the floodgates open. Particularly among women there's this mindset that we shouldn't think about these things or talk about these things but men do. We just need more prominent women being willing to share their financial journeys.

AGC: How do you think social media has affected conversations about money?

PB: Social media is a two-way street. It can be used really positively to educate and inspire but obviously [there's also the] impact it has on people feeling like they have to compete or compare. But I think overall the sharing of information can never be a bad thing and everything should be taken with a pinch of salt. We all know that social media shares people's highlights and not always the downsides to things.

AGC: You take a very honest approach to money and your financial journey in your videos. What motivates that?

PB: Because I know that I've been on a journey and I've become more financially literate because of the things people shared with me. And if certain people hadn't told me certain things, I don't think I'd be where I am. So I feel it's my duty to provide other people with that insight as well, because it helped me.

AGC: I guess that's what can be a positive thing about social media and YouTube. If you don't have a really strong network or if you don't have financial mentors or people who you can look up to, that's where content like yours and others' can step in.

PB: Exactly. And it also changes your perspective. I think some people think, "oh I'll never be successful" or "I'll never have money," "it's never possible for me." But there's almost this little glimmer of hope when you see something outside of your circle. So that's what I feel is the power of social media.

AGC: Do you believe that women are still judged for having that ambition and wanting financial success and, if so, what can we do about it?

PB: We're judged by others but we're also judged by ourselves. There's this internal argument: what I should feel, should I be like this, should I be this driven? What can we do about that? There's already a cultural shift, anyway. So women are starting to earn more than men in certain areas. I think just a general shift in culture and society will be what really makes those changes.

AGC: You made the jump from working in finance to becoming a YouTuber. What was that like and what advice would you give to somebody to prepare financially for a career change like that?

PB: So, it was quite interesting because when I made the jump it was before the industry was big as it is now. I had a stable job. I was earning a good salary. But I could see the potential of what I was doing and I started to earn some money. I didn't just make the leap, I did a financial calculation. My background was accounting and I worked as a business analyst. So, for me, making calculated decisions was important. I did a little spreadsheet and I could see that my earnings were more than my salary, and I could see that if it went on like this for a certain number of years, then I'd earn more than working in my main job. And so I said, make the leap and see what happens and it's grown exponentially.

AGC: So would you advise drilling down into the detail and look at what impact it will have on your finances?

PB: I think people can test, rather than making a big leap. Because I'm quite risk averse, I'm not a big leap kind of person. I'll test it out and see how it goes. Maybe take a sabbatical from work. Maybe do something on the weekend alongside. I built myself up for five years while I was still working a job and quite a hard job. I wasn't willing to give up my whole career for something on a whim. So I tested it. That's a good option for anyone who's a bit concerned about what next steps they can take.

AGC: What advice would you have for somebody who might feel being financially stable is out of reach?

PB: I would tell them to surround themselves with alternative examples. So, either they might have people in their lives, or situations, that make them feel like something's impossible. I always say books are very valuable, read other people's stories and see which stories can apply to them. I've seen so many examples of things that can't be possible, becoming possible, that I now know that most things can happen if someone tries.

AGC: What advice would you give someone who wants to improve their relationship to money?

PB: I think a lot of people close their eyes to the bills that come in or they don't look at their bank account, they don't track anything. They just let things go or let things happen. But if you look at your finances every day, you budget every day, look at your accounts every day, you're going to be far more aware what's going on. Open letters if you've got debts and that kind of thing. I always tell people no to bury their heads in the sand.

AGC: What three saving tips would you give to a friend if they asked?

AGC: What does a good relationship with money look like to you?

AGC: So a "you've got to spend money to make money" sort of approach?

Caught Off Guard, presented by The Break Platform, is an independent podcast created and hosted by Patricia Bright. Season one of Caught Off Guard is available to listen on Apple Podcasts, Google Podcasts, Spotify, wherever you listen to podcasts and on The Break YouTube channel. Season two launches later in 2020. Subscribe to be kept updated.