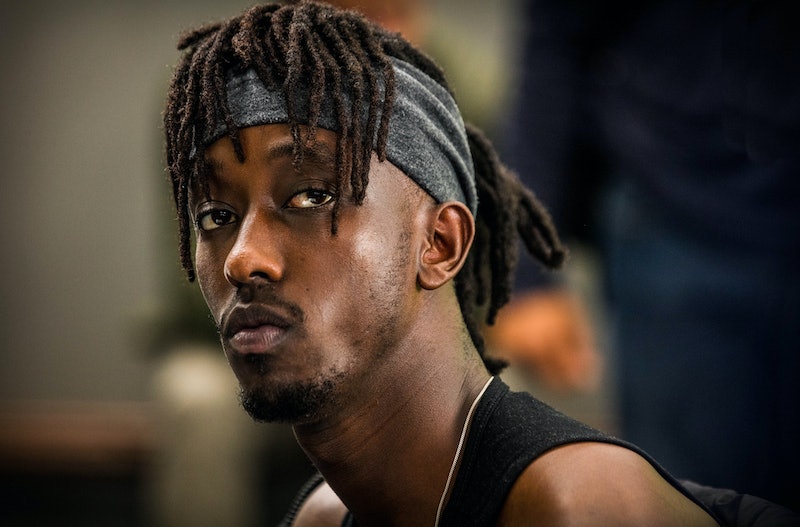 BBC's new Tuesday night drama Informer has already occupied all water-cooler chat throughout the week. The series, which sees a second generation Pakistani immigrant going undercover for London's counterterrorism team, is well on its way to becoming the next Bodyguard. The script is slick, the drama's edge of the seat stuff, and the cast is strong as hell. An actor who's stood out in particular is Roger Jean Nsengiyumva, AKA Dadir Hassan, the cellmate of main character Raza Shar. It looks like you'll be seeing much more of him, so who is Roger Jean Nsengiyumva?

Well, first off, Nsengiyumva had one hell of a difficult childhood — it could even be a BBC drama of its own. Born Jean Roger Nsengiyumva Cadeaux, Nsengiyumva spent his early years fleeing the genocide in his home country of Rwanda, before spending his teenage years in Norwich, attending City of Norwich School, according to Eastern Daily Press.

As Norwich's Evening News 24 writes, he grew up playing a lot of football before landing a role in 2010's Africa United — a film which sees Nsengiyumva and his pals attempting to audition for the World Cup's opening ceremony, with some dyer consequences. He told Huck Magazine that this first opportunity came after he was spotted by a London producer on the cover of a book. "I told mum, ‘Put it down it’s a hoax,'" he told the magazine of the call his mother received about the opportunity.

From there, he went onto star in the likes of Tomb Raider, where he played the super lovable Rog. You might also have seen him in the gritty 2013 drama Sixteen. According to Radio Times, the actor has also played Coli Eli in ITV drama Chasing Shadows, and Jamal in CBBC drama Postcode. Or, if this is your first time seeing him, it probably won't be the last.

The actor's been dazzling viewers already with his role as Dadir Hassan on Informer. The BBC describes his character as "charismatic, ebullient but a half-cocked hand grenade, any interaction with Dadir could end in a hug or a fist fight." His onscreen dynamic with Nabhaan Rizwan aka Raza Shar is electrifying, and their growing friendship, becomes the heartbeat of the show.

Informer comes in the wake of the much needed calls for increased diversity on our television screens, of which the BBC has developed its own formal strategy. The show is an intimate, human portrayal of the personal stories behind the headlines, and as creator Rory Haines told the BBC on Oct. 15, that was all part of his plan. "We wanted to take what we all hear in the headlines consistently about the ‘War on Terror’ and tell the actual human story as opposed to spies, conspiracies, and plots. How does it actually affect people who live in the city and how is London impacted by it?"

In many ways the drama feels like something of a love letter to London, and Nell Hudson, who plays Raza's love interest Charlotte Humphreys, told Bustle that "London — cheesy as it sounds — is such a character in the show." That said, by handling such a sensitive topic, and at a time when Muslim stereotypes on television are rightfully increasingly scrutinised, Haines has been open about the fact the TV show may not have got everything right: "We are definitely aware of the responsibility of weighing into these big issues in a TV drama. I don’t anticipate that we have got everything right but I do think that we have put a lot of thought into treating this with as much humanity and nuance as possible."