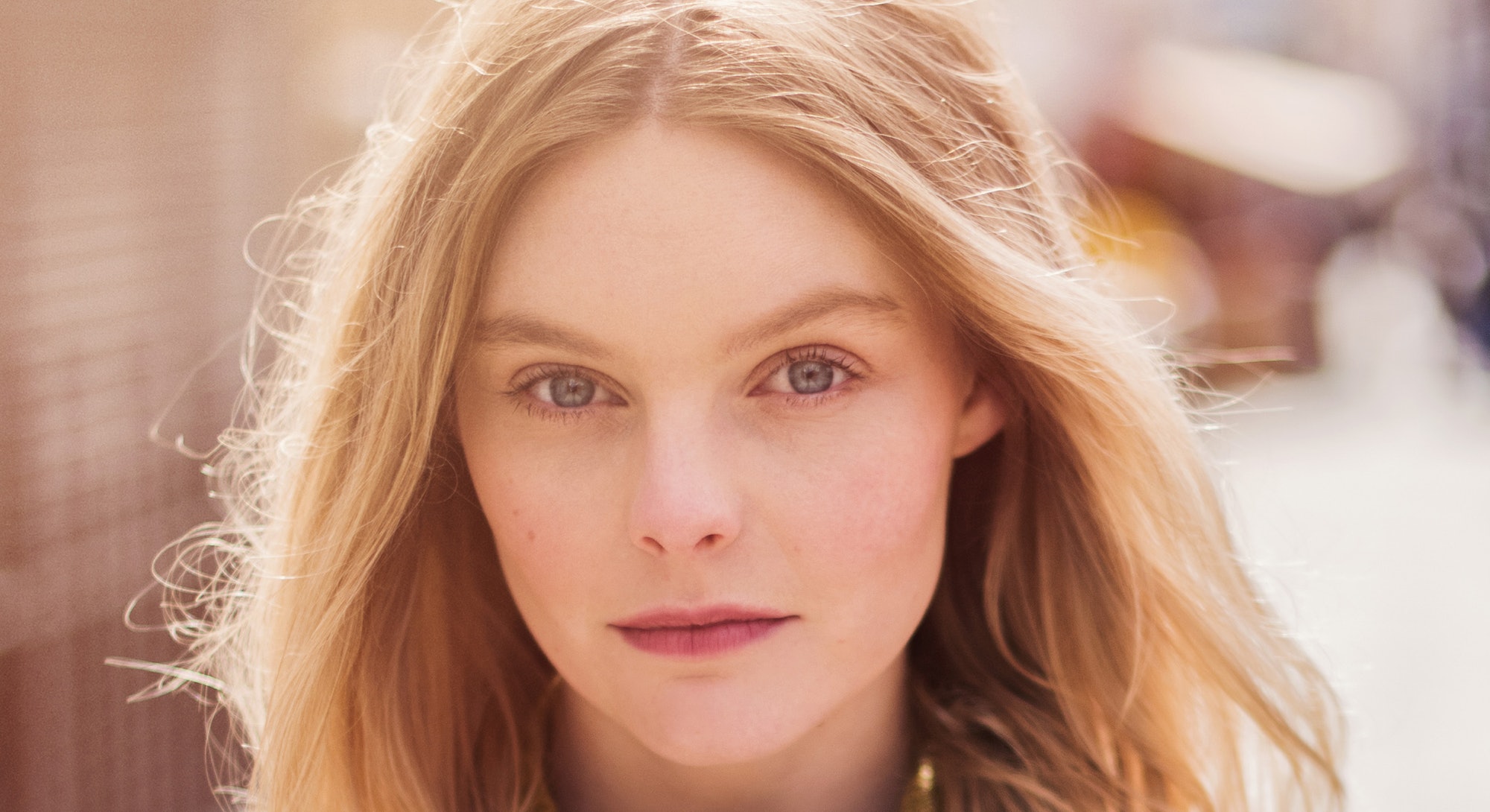 "It's nice to take a break from wearing a corset," laughs British actress Nell Hudson as she describes her role in the BBC's new thriller Informer. A corseted Hudson is probably the version of the actress with which you're most familiar. She's worn one in ITV's Victoria, where she plays the Queen's dresser, Mrs Skerrett, and in Outlander, where she plays Laoghaire MacKenzie, the fierce Scottish schemer who duels with Claire over Jamie's affections. In story, substance, and subject matter, Informer couldn't be more of a departure.

Set in modern day London, the drama tells the story of Raza, deftly played by Nabhaan Rizwan, a young British Muslim who is held in police custody after a minor drugs arrest. The drugs were procured for Charlotte, played by Hudson, and she, together with her pink hair and plummy accent, soon finds themselves in A&E. Thus begins Raza's descent into the clutches of counterterrorism officer Gabe, played by a troubled-looking Paddy Considine, who finds leverage on Raza in order to persuade him to become a police informant. It's a dark tale, and one that comes at a time when Muslim stereotypes on TV are under heightened and necessary scrutiny.

Hudson's role may have the air of a familiar stereotype, but as the series goes on, Charlotte and Raza's deepening relationship brings to light another facet of the chameleonic jig Raza must complete on a daily basis. With Sharon D Clarke, Sunetra Sarker, and Bel Powley all in supporting roles, Bustle sat down with Hudson to talk improvisation, East London, and a bulging reading list.

Charlotte Owen: What attracted you to the role in Informer?

Nell Hudson: It was one of those scripts that I got sent that even though the part wasn't that big, I knew I wanted to be a part of it. I thought the writing was absolutely brilliant and every character, no matter how big the part, is going to be integral to the world of the show and that was really appealing.

CO: How does your character evolve as it goes on?

NH: Charlotte is a completely 3D character, but the role that she plays in Raza's life is another side of himself that he has to be in his chameleon existence. Charlotte represents this wealthy, middle class, well-to-do world and when he's around Charlotte — and we see him later around Charlotte as well as her family — we see a version of another role that Raza has to play in his life.

CO: Did you film it all in London?

NH: Yes, pretty much. There was one part that we went down to Kent to film for Charlotte's family home, but pretty much all in London and in East London as well, which is an upside for me because I live in East London. I literally walked home from set one day it was great.

CO: What was the experience of shooting in the capital like?

NH: It was amazing. So many people have said, and I completely echo them, that London — cheesy as it sounds — is such a character in the show. It's that London that we all know. It's so gritty and real and tangible.

CO: It's clear from watching the first episode that there's this raft of young British talent in the show. What was the working process like?

NH: It was so much fun. Jonny Campbell the director just let us play. Often, a couple of the actors who had grown up in London would have a better way of saying their line, because they'd know exactly how that character would say that thing. Jonny just let us play and improvise and experiment and it was really, really good fun.

NH: Yes. Nabhaan [Rizwan], the lead, is just astonishing, and I couldn't believe that was his first job. The majority of my scenes are with him and I just felt like I was working with someone who'd been doing it for many years.

CO: Has it been refreshing to be doing something contemporary?

NH: Absolutely. That was another huge attraction for me with Informer — being able to actually play someone who I could relate to or at least someone who I could know. Someone who I've encountered in 2018, in real life. It’s nice to be able to speak words that I would actually say, it's just that little step closer to you that makes it a little bit easier to get to know the character. It's nice to take a break from wearing a corset as well.

CO: I bet! What was the experience of shooting Outlander like?

NH: It's been amazing, [especially] coming back for every series. It jumps around so much in time as you know and so much in location around the world. The cast is something like 400 people now. Of course, the principal cast is fewer than that, but you need all these different actors from these different parts. I've seen the show grow and develop through all those different seasons. It's been really amazing, I've met so many amazing people on it.

CO: How did it feel when they aged you for Season 3?

NH: It was depressing. (laughs) Yes. It wasn't great. I would look in the mirror and just be like, "Wow is this the future?" I'm going to start wearing SPF 50 every single day. It's a little bit frightening but I always say it's very liberating as an actress in your twenties to completely let go of any vanity and play someone older — not that when you're old you’re less stunning — but she doesn't look good. She's meant to have had a really difficult life. She looks haggard and she was a beauty. To just let go of all of your ego and just commit to being a bitter old hag. It was really fun.

CO: Are you much of a beauty product junkie?

NH: I got into it more recently. I used to be terrible. I definitely wasn't raised that way. My mom is really bookish and she never taught us how to apply makeup or anything. All the photos of me back at school with my early make up attempts are completely risible and look so terrible. The orange tan line… it's bad, it's all bad. I'm more into it [now].

CO: As a young actress, how do you feel about social media?

NH: I take it all with a pinch of salt personally. I really enjoy it I think it's really good fun. I think it's also a really good way to keep up relationships with fans and keep everyone posted about what shows you've got coming out and what projects you're working on. I try not to get too engaged with it because obviously, it can be quite a messy place.

CO: What are you reading at the moment?

NH: I'm reading The Guilty Feminist book by Deborah Frances-White. I picked that up as soon as it came out. I'm a huge fan of her podcast and just being able to revel in her voice — it's amazing. I just finished My Salinger Year by Joanna Rakoff, which is a lovely personal novel about her working in New York as an editor and meeting J. D. Salinger. I mostly do love fiction. I love to escape and be in a different world for a while.

CO: Are there any books that you've read recently that you'd love to be as an adaptation?

NH: For the last five years, I've been hounding my boyfriend to read The Secret History by Donna Tartt. It's in my top favourite books of all time and now he's finally reading it and I'm so stoked because it means I get to talk about it with him. I know Donna Tartt is very precious about it and it's been forwarded for film rights and then withdrawn again. Now that The Goldfinch had been made, maybe it means The Secret History might be made as well. I'd love to do that. I'd love to be in it.

CO: Your mother's author Cressida Connolly. Do you write yourself, and are you ever interested in trying to write something?

NH: Yes, definitely. I've dipped in and out of writing and it’s definitely something that I find myself going back to between jobs as a sort of creative outlet, so we'll see.

CO: Do you have an acting idol or anyone who's career you’d like to emulate?

NH: I really love Emma Thompson. I think she's a huge inspiration, and someone who hasn't ever let herself be defined by typecasting. She's just always been very intelligent, and she's created her own work. She's someone who I would love and always go back to.

CO: I feel like activism is such a big part of being in the public eye these days. Are there any causes that you're particularly sort of passionate about?

NH: ­ Well, since getting a dog, that's really opened my eyes to animal cruelty charities. I give to several charities — I've spoken before about Save the Children, who do amazing work, and about a charity I support called Fistula Foundation. When you give birth, you’re at danger tearing down there, and in developing countries, where there isn't the proper care and medicine, that can kill you. That's such a simple thing, and here it happens so frequently, and you deal with it, but it can kill you if you're born unfortunately in the wrong place. Fistula Foundation is building hospitals and ways for women to treat this really simple problem and stop unnecessary deaths.

Informer is available on BBC iPlayer from 10 p.m. on Tuesday 16 October.