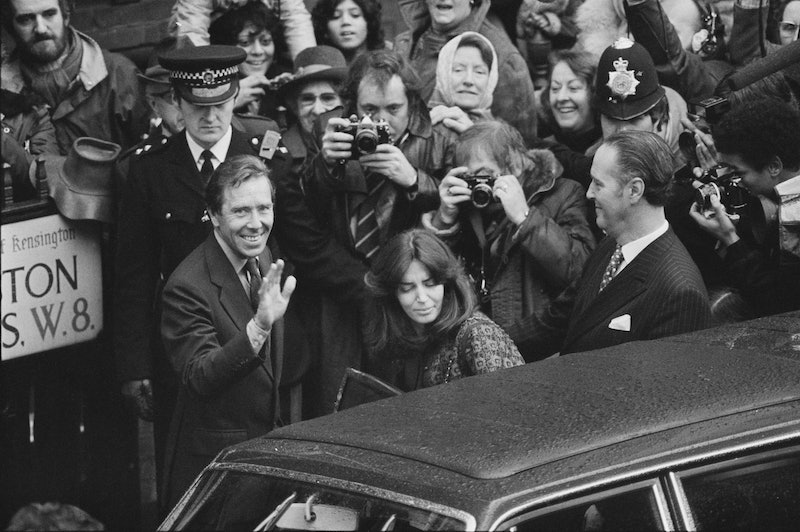 Princess Margaret's marriage to Antony Armstrong-Jones, 1st Earl of Snowdon, goes from brittle to broken over the course of The Crown's third season. She spends the 10th and final episode falling for the much younger landscape gardener Roddy Llewellyn while Armstrong-Jones romances Lucy Lindsay-Hogg, a young Irish divorcée. He's still seeing Lindsay-Hogg when scandalous paparazzi photos of Margaret and Llewellyn land on the cover of the News of the World, effectively ending their marriage of almost 16 years. But it was far from just a fling. On December 15, 1978, five months after the dissolution of his first marriage, Lord Snowdon took Lindsay-Hogg as his second wife.

Lindsay-Hogg, a producer, met Snowdon at a dinner party in Chelsea in 1972, after which she became the royal photographer's assistant. When his separation from Princess Margaret was announced in 1976, the pair was flying to Australia together for an exhibition of his photographs. By then, they'd been seeing each other for four years. According to Snowdon's official biographer, he would sneak out of Kensington Palace, where he lived with Margaret and their two children, to meet Lindsay-Hogg in a nearby flat on Kensington Church Street. Margaret knew about his mistress and refused to even utter her name, referring to Lindsay-Hogg as "the thing," just as she does in The Crown.

After getting married in a Kensington register's office, Snowdon and Lindsay-Hogg lived together in a white stucco villa on Launceston Place in Kensington. The home, which was near to the palace where his children still lived, was a gift from the Queen — an addition to the £100,000 settlement he received from Princess Margaret.

In 1979, Lindsay-Hogg gave birth to the couple's only child together, a daughter named Frances, with whom Snowdon was close. Speaking to Vogue Italia, Frances recalled her childhood: "I grew up in the house where my father had his studio (I'd come home from school and if the red light was on above the door I had to be absolutely silent). Every time he'd finish shooting, he'd call me in to meet his subject."

But unbeknownst to Lindsay-Hogg, she was not the last of her husband's affairs. Even before they were married, Lord Snowdon had begun to see the married journalist Ann Hills.

Unlike Princess Margaret, who tolerated Snowdon's affairs throughout their marriage, Lindsay-Hogg drew a hard line. When she finally learned of his relationship with Hills, the couple divorced after 22 years of marriage. It would not be discovered until later, but Snowdon also had a son with magazine editor Melanie Cable-Alexander while married to Lindsay-Hogg. Still, the two were able to maintain a relationship. In December 2014, a couple of years before Snowdon's death, they were spotted leaving lunch at La Famiglia in Chelsea — the same neighborhood where, decades earlier, they first met.