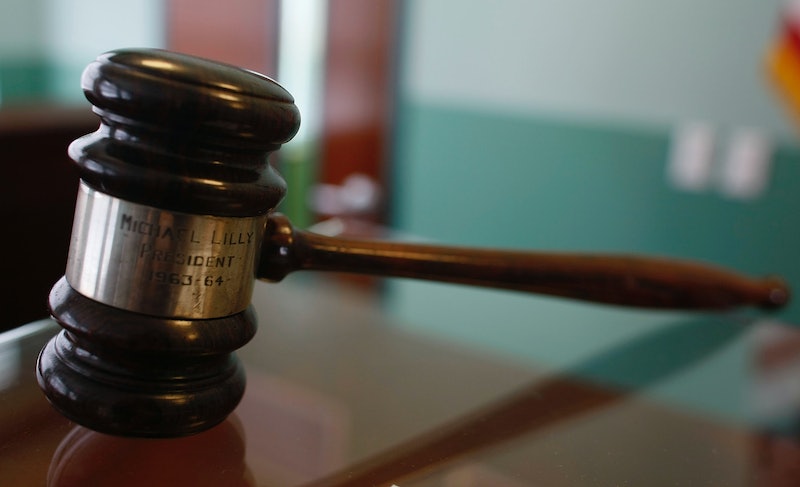 For the last seven years, Iowa's state supreme court justices have all been men, making it the only state in the country with no women on its top court. That's about to change, though: Iowa Gov. Kim Reynolds will soon appoint a judge to fill a fill an upcoming vacancy on the court, and the three finalists she's considering are all women.

Iowa Supreme Court Justice Bruce Zager will be retiring in September, and the State Judicial Nominating Commission spent two days interviewing potential candidates to fill the vacancy that will be created once he does, the Gazette reports. On Tuesday, the commission advanced three finalists, all of whom are women. Reynolds is required to pick from that list, so no matter who she taps for the job, a woman will sit on the Iowa Supreme Court in September for the first time since 2010.

The last woman on Iowa's Supreme Court was Chief Justice Marsha Ternus. In 2010, however, she and two other judges on the bench were targeted by state conservatives for ruling in favor of same-sex marriage, and all three ended up losing reelection. Then-Gov. Terry Branstad appointed Zager to fill Ternus' seat in 2011.

Appointments to the Iowa Supreme Court are made very differently than appointments to, say, the U.S. Supreme Court. Under the terms of a 1962 state Constitutional amendment, candidates who wish to sit on the court fill out applications for the job, which are then reviewed by the State Judicial Nominating Commission. The commission then advances a list of finalists and gives it to the governor, who must then appoint somebody from that list. On year after being seated, a new justice must be reelection by the voters in to continue serving; after that, they serve eight-year terms.

The Iowa Supreme Court recently ruled on a high-profile abortion case, and it may rule on another one once Zager's eventual replacement is seated. In June, the court gave an unexpected victory to progressives when it struck down a law that imposed a 72-hour waiting period for women in the state seeking abortions.

In addition, Reynolds signed a the most restrictive abortion law in the country in May, and that too headed to the courts. The law banned abortions as soon as cardiac activity is detected in a fetus; that's usually around six weeks, which is before many women even know that they're pregnant.

Planned Parenthood, the Emma Goldman Clinic and the American Civil Liberties Union sued, and in June, a district court judge blocked the law from taking effect while it makes its way through the courts. However, that case could well land before the state supreme court, depending on how the appeals process plays out.

Iowa is currently the only state with an all-male supreme court, according to the Hill. The state with the highest percentage of women on its top court is Wisconsin, according to a report released in March: Six out of seven justices on the Wisconsin Supreme Court are women. In nine states — Oregon, Washington, New Mexico, Arkansas, Tennessee, West Virginia, Ohio, Maryland and Vermont — the majority of state supreme court justices are women.

Reynolds, who ascended to the governorship when Branstad left to become President Trump's ambassador to China, has 30 days to fill the empty seat.