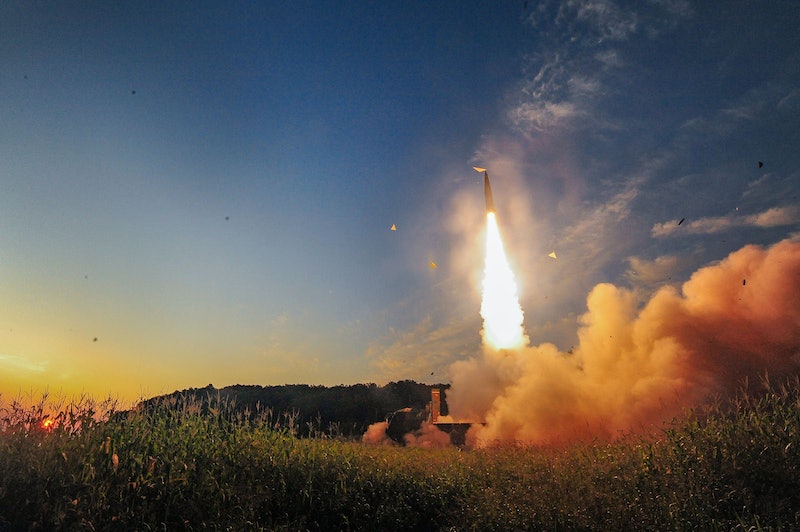 A nuclear test in the ocean conducted by North Korea, specifically a hydrogen bomb, would send radioactive particles flying through the air and wind could carry the dangerous particles over hundreds of miles, according to The Atlantic. Essentially, testing a hydrogen bomb — let alone launching one as an act of war — would be detrimental to environment, and deadly to human beings.

Hydrogen bombs are different from atomic bombs, such as the ones dropped on Hiroshima and Nagasaki during World War II. As The New York Times explained, atomic bombs rely on fission alone, whereas hydrogen bombs use both fission and fusion. Fission implies either uranium or plutonium atoms are being split up, whereas fusion refers to atomic nuclei being fused together, or joined.

To put the difference into perspective, the United States once tested a hydrogen bomb that was reportedly 1,000 times stronger than the atomic bombs dropped during World War II. According to The New York Times, that hydrogen bomb was tested less than a decade after World War II ended. The atomic bomb dropped on Hiroshima instantly killed 80,000 people. In total, over 190,000 people died of causes related to the radiation or impact. Pondering the damage that a hydrogen bomb could inflict, given its greater power, is horrifying.

President Trump's habit of provoking North Korea's leader on Twitter isn't helping the situation. On Saturday, Oct. 7, Trump posted a tweet that had Americans on edge.

More presidents and their administration have been talking to North Korea for 25 years, agreements made and massive amounts of money paid...hasn't worked, agreements violated before the ink was dry, makings fools of U.S. negotiators. Sorry, but only one thing will work!

No one necessarily knows what Trump meant by "only one thing will work," but many are surely hoping that he isn't alluding to military action. According to CNN, Trump told reporters that, "You'll figure that out pretty soon." In addition to making mysterious remarks about how the administration plans on dealing with Kim Jong-Un, Trump has also called the nation's leader "rocket man." Just months prior though, he insisted that he'd be delighted to meet Kim "under the right circumstances."

All of this back and forth has increased nerves around possible nuclear war. The fact that hydrogen bombs are being developed makes that fear even more intense. National Security Advisor H.R. McMaster said on ABC’s This Week that Trump was determined to contain the threat posed by North Korea. Of Kim, he said: “He is going to have to give up his nuclear weapons, because the president has said that he is not going to tolerate this regime threatening the United States and our citizens with a nuclear weapon.”

North Korea claimed to have conducted its first ever hydrogen bomb test in January 2017. An announcer in North Korea explained over state-run media why the country supposedly tested the bomb.

This is the self-defensive measure we have to take to defend our right to live in the face of the nuclear threats and blackmail by the United States and to guarantee the security of the Korean Peninsula.

The mountain beneath which the nuclear tests take place has even changed shape due to the explosion's force. And the latest test caused a 6.3 magnitude earthquake to shakeup the northeastern region of the country.

Though bombs this powerful have never been used in war — and hopefully never will be employed — North Korea and the United States aren't the only countries that have tested them. Russia, China, the United Kingdom, and France have also conducted tests.

Editor’s Note: This story was updated on Oct. 24 to meet Bustle’s editorial standards.