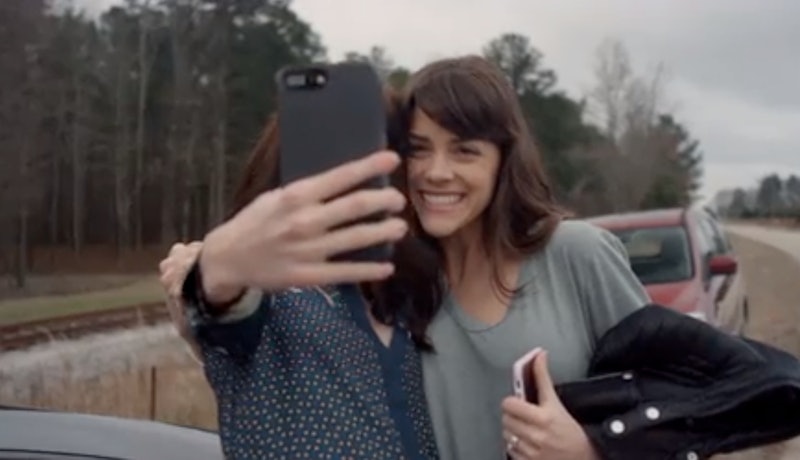 There are few things better than watching a creepy movie during a summer thunderstorm, bowl of popcorn in hand, rain pattering on the roof. Fortunately, this summer, Lifetime totally has you covered in that department. And one of the new thrillers the network has lined up is A Sister's Secret, which premieres Sunday, Aug. 5 at 8 p.m. ET. Like most Lifetime movies, this one is sure to be filled with twists and turns you didn't see coming. But many Lifetime movies aren't just fictional—some draw inspiration from real events. So is A Sister's Secret based on a true story?

According to the movie's website, yes. Before the plot description, Lifetime declares that A Sister's Secret is "based on true events." But there is no further information given as to who actually serves as the inspiration for this story. And if the events of the movie really are drawn from a real life story, then it's shocking that the public hasn't been aware of it sooner, because based on the movie's description, this was truly an unbelievable case of deception and murder. If all of those details are real, then the case definitely should have been front page news just about everywhere.

According to the Lifetime description of the plot, the movie centers on twins who swap places on their 30th birthday. Sounds like a fun comedy, a la Parent Trap, right? Wrong. This is a Lifetime movie, after all, which means murder is basically a requirement. One of the twins is killed, but it is quickly revealed that the killer was really targeting the surviving twin, who was saved by the fact that she was pretending to be her sister. "The clock is ticking as the only living sister still acting as her twin begins to uncover a sinister plot for 'her' murder, while the killer realizes he took the wrong woman’s life," the description reads. "The living sister must continue acting as her twin, living with her husband and family, and unravel the mystery before she and her sister’s family become the killer’s new targets." Sounds terrifying.

Some internet sleuthing doesn't readily reveal the case which might have served as the inspiration for A Sister's Secret, which might indicate that the inspiration is pretty loose. But A Sister's Secret is far from the first Lifetime movie to draw inspiration from real events. In fact, Refinery 29 was able to name 41 Lifetime movies inspired by true stories. Some of them are chronicling the lives of famous people, from Simone Biles to JK Rowling to Will and Kate. Other movies chronicle famous trials or murder cases, from Casey Anthony to Amanda Knox to the Menendez Brothers. The movies based on real events are some of Lifetime's most popular, and it seems probable that A Sister's Secret will follow suit.

A Sister's Secret also features a fun, non-terrifying surprise: Paula Abdul! The multitalented pop star will play someone working on the investigation into the murder, a new type of role for the world-renowned choreographer. Though her character may or may not have been based on a real person, no one will be complaining about that bit of fictional license.

Twins, murder, Paula Abdul. What more could you want in a summer flick? Pass the popcorn.

More like this
David Tennant’s Transformation In ITV’s 'Litvinenko' Is Astonishing
By Sophie McEvoy
The 'Love, Lizzo' Harry Styles Scene Is Just 1 Moment That Made Fans Feel Seen
By Brad Witter
Lindsay Lohan Just Recalled A Hilarious 'Parent Trap' Story
By Sam Ramsden
Will Smith Reflects On "Horrific" Chris Rock Oscars Slap In First TV Interview
By Sam Ramsden
Get Even More From Bustle — Sign Up For The Newsletter