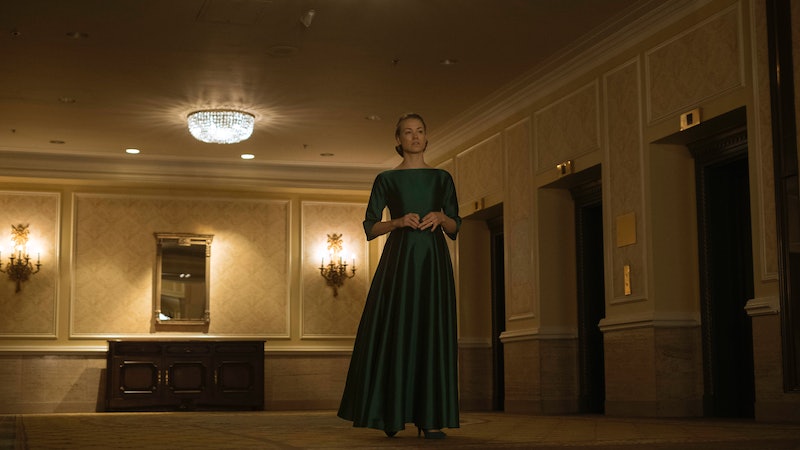 Each week, Hulu's adaptation of The Handmaid's Tale expands the grim, dystopian future of the United States that we can never allow to become a reality. In Episode 6, viewers got a better look at the Commander's wife, Serena Joy, and what she was like before the regime of Gilead reduced her to a silent, second-class citizen who isn't even allowed to read. In her previous life, she was a well-respected author. But, is Serena Joy's book, A Woman's Place, real outside of this fictional world?

There are actually two real books by that title, but neither of them are written by the fictional character of Serena Joy. One book is by author Katelyn Beaty and the other is by Lynn Austin. Both books are Christian-themed, which is an interesting coincidence considering The Handmaid's Tale takes place in a fundamentally religious theocracy. The difference is that Austin's book is considered a novel, while Beaty's takes a more guidance approach to "the importance of women and work," and the book is subtitled A Christian Vision For Your Calling In The Office, The Home, and The World. According to the author, the title is more tongue-in-cheek than serious like the fictional Serena Joy's was and seeks to show that "whether caring for children, running a home, business, or working full-time, all readers will be inspired to live in a way that glorifies God," according to its Amazon listing.

Handmaid's Tale viewers don't get to see what the Commander's wife had to say in her own book (just a cover photo), but one could gather that it would be an interesting read. In the episode entitled, "A Woman's Place" (see what they did there?), the ambassador from Mexico (who is a woman) visits Serena Joy and her husband. In one scene, she quotes Serena's book, which she re-read on the plane from Mexico, saying, "Don't ever confuse a woman's meekness for weakness." She then reminds Serena that she herself referred to the literature as "domestic feminism." Quoting Serena to her also serves a reminder that not all of the world operates like Gilead. The Mexican ambassador is reminding everyone in the room that — even as a woman — she still reads. In this moment, it's especially sad to see how Serena Joy has been reduced from a strong, ambitious career woman to the silenced, downtrodden woman she is today.

Even though you can't read Serena Joy's book, it's easy to get a sense of what she was trying to say in it, and how her views on life helped create the prison she's now in. In a flashback, after her first book argued for the benefits of "domestic feminism," Serena tells her husband she has an idea for a second book. She wants to write about how fertility can be used as a resource and that reproduction should be seen "as a moral imperative." But, the birth of Gilead illustrates how when you turn words into action, things don't always go as planned.

Editor's Note: This article has been updated from its original version to include more context about Katelyn Beaty's book.

More like this
This Megachurch's Followers “Look Forward To” Their Leader’s Prison Release
By Brad Witter
Allie Rowbottom Will Have Her Feminism With A Side of Botox
By Samantha Leach
Steve Banerjee's Wife Irene Sold The Chippendales Brand Prior To Her Death
By Brad Witter
Robert Downey Jr.’s New Film Is A Tender Story of Fatherhood & Forgiveness
By El Hunt
Get Even More From Bustle — Sign Up For The Newsletter