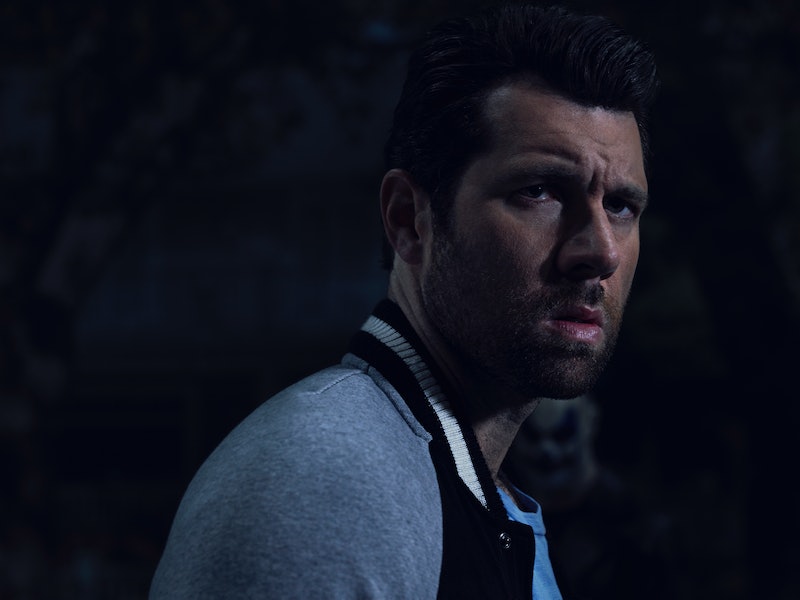 While American Horror Story has always showcased tales designed to haunt your dreams, the next chapter, AHS: Cult, is putting the focus on telling a frighteningly relevant and quintessentially American story. Each season of AHS has satirized different cultural legends and fears, but Season 7 is more interested in talking about what America is currently going through. It will probably feel to you like AHS: Cult is based on a true story, and that's not entirely wrong. Though most of its characters are creations, this new season is taking a look at the aftermath of the 2016 Election, as well as the history of cults in America, while adding enough fictional terror to keep it safely in the AHS canon.

Showrunner Ryan Murphy explained during a live Q&A that this season of American Horror Story uses the recent election as a backdrop, but it is not explicitly about the 2016 election. Per Variety's coverage, he said, "Yes, the jumping-off point of the show is election night, and the characters have very strong points of view about Trump and Clinton, but [the show] really is not about them." Even if it's not directly about the candidates, AHS: Cult will almost certainly be pulling from the modern political climate while looking at how cults are defined and being redefined in 2017.

During the same panel, Murphy further described AHS: Cult as being "about the rise of a cult of personality that can rise in a divided society." At the center of that seem to be the many characters that Evan Peters is playing in Season 7. In addition to fictional alt-right figure Kai Anderson, Peters is also playing a smorgasbord of real-life group leaders from American history. Charles Manson, Jim Jones, and David Koresh, along with multiple other leaders, will be played by the actor during the course of AHS: Cult. Much like previous seasons of American Horror Story, it seems like this one will take time away from its main plot to explore other horrifying happenings, some inspired by real events. This season, those excursions with involve close looks at famous cult leaders that may have inspired the actions of Kai Anderson.

Another real-life occurrence that American Horror Story is pulling from is the sudden and mysterious onset of clown sightings that plagued America in 2016. Clown imagery has been appearing in the promotional material for AHS: Cult and it seems that clowns masks play a major role in Anderson's cult. This season also promises the return of AHS: Freak Show's terrifying Twisty the Clown. While the reason for the 2016 clown panic has never been determined, it seems that Ryan Murphy is offering up a possible — if extreme — explanation in AHS: Cult.

Cult itself may not be a true story, but it's pulling from various facets of reality to craft its narrative. From the 2016 election to various cults to the somehow real phenomenon of scary clowns wandering America, Season 7 is shaping up to be the show's more modern season yet. Other seasons of AHS have focused on American mythology and different aspects of America's past, but AHS: Cult is all about America right now, and there's nothing scarier then that... especially with the addition of some creepy clowns.

More like this
ITV's 'Maternal' Was Inspired By A Very Simple – & Unanswerable – Question
By Maxine Harrison
The 'Gossip Girl' Reboot Creator Is “Looking For A New Home” To Air A Potential Season 3
By Brad Witter
The 'Freeridge' Cast Shared Their Hopes For A Potential Season 2
By Grace Wehniainen
You Might Want To Rewatch This Key 'On My Block' Scene To Understand 'Freeridge'
By Grace Wehniainen
Get Even More From Bustle — Sign Up For The Newsletter
From hair trends to relationship advice, our daily newsletter has everything you need to sound like a person who’s on TikTok, even if you aren’t.