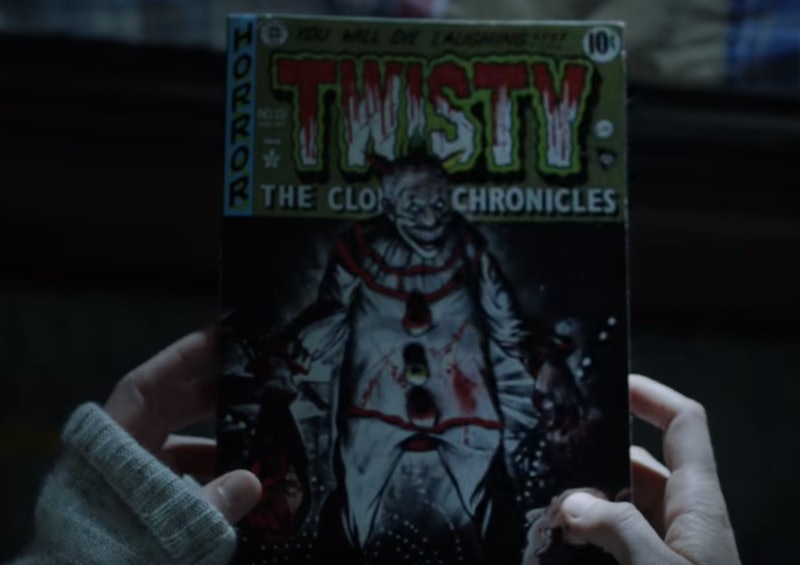 If you suffer from a fear of clowns or would simply like to ever sleep again, turn back now. FX unveiled a new American Horror Story: Cult teaser all about Twisty's comic book, and it's pure nightmare fuel. The murderous clown from AHS: Freak Show is set to return this season, which features a character, Ally, played by Sarah Paulson, who has coulrophobia — something Evan Peters' cult leader character, Kai, seems intent on using against her in the trailer.

With clowns set to play such a big role in AHS: Cult, it's not surprising that Twisty is returning this season. It seems that in modern times, he's become something of a horror icon. Not only does he have his own comic, there's a Twisty doll as well. The creepy clown won't just appear in merchandising though, actor John Carroll Lynch is reprising his role onscreen. This is a curious turn of events because series creator Ryan Murphy previously confirmed that there won't be any supernatural elements in the new season, and fans will remember that Twisty died in Freak Show. However, flashbacks have always played a role in the AHS franchise, so the menacing clown could return that way — or maybe he's just haunting someone's dreams.

After watching the motion comic, it will become clear that the nightmare scenario is all too plausible. If Ally reads that particular horror show, then she's in for more than a few sleepless night. The tale of Twisty cutting out a woman's tongue is about as far away from a bedtime story as you can get.

The motion comic plays on the sense of fear and helplessness that appears to be the driving force behind AHS: Cult. With the new season beginning on election night, Murphy has made it clear he's interested in exploring the current state of unease permeating the country. On one side of the story is Ally, a woman so terrified after the election of Donald Trump that phobias seem to be consuming her life. On the other side is Kai, a man who feeds off of chaos and believes fear is the most powerful motivator of them all.

Adding a figure like Twisty to the mix only makes sense. His origin story is full of heartbreak, from his childhood trauma to being the victim of vicious lies at the circus where he worked. However, the clown was no innocent. He became a serial killer and a kidnapper. Twisty is the kind of man whose legend is bound to take on a life of its own.

Given how frightening the comic book excerpt is, it's no wonder Ally finds the famous clown so unsettling. Twisty is just one more symbol of fear in a season of AHS that is gearing up to find the horrors hiding in the darkest corners of real life.

More like this
What’s New On Netflix: 'Stranger Things' & 'Mean Girls'
By Arya Roshanian
What’s New On Netflix: The Return Of 'The Umbrella Academy'
By Arya Roshanian
Here’s Everything Coming To & Leaving Netflix In July
By Grace Wehniainen
12 Documentaries & Films About Cults From Netflix UK To Hook You From Start To Finish
By Kay Leong
Get Even More From Bustle — Sign Up For The Newsletter