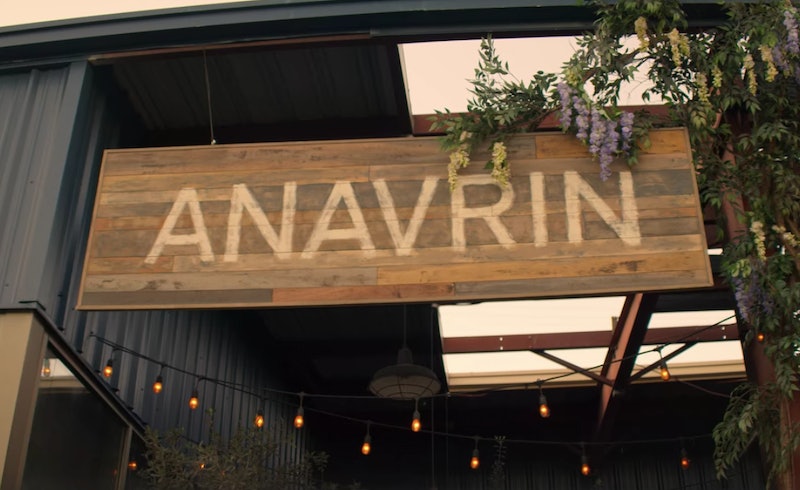 Light spoilers ahead for the second season of You. After Candace confronts Joe in the Season 1 finale, he skips town and heads to L.A., where he finds work in Season 2 at a grocery store called Anavrin. You relishes in skewering the kombucha-loving, gluten-avoiding, namaste-saying residents of SoCal. Indeed, the narrator despises everything about the west coast, despite working at a health-conscious bookstore attached to a grocery valhalla called Anavrin, or "nirvana" spelled backwards. It's not a real store, but E! News pointed out that it's likely based on the upscale Erewhon (which is, of course, almost Nowhere spelled backwards).

It's ironic (or perhaps on purpose) that the store is called Anavrin, since Beck was wearing a Nirvana T-shirt when Joe imprisoned her at the tail-end of Season 1. Erewhon is similarly upscale and aspirational. Just peruse the store's Instagram and you'll be convinced you've reached Nirvana. the organic, local produce? Artfully arranged. The hemp juice? Cold-pressed. The pizza? Raw and vegan.

It's unclear whether YOU was filmed in Erewhon or not, but the second season certainly captures the store's high-end, health-conscious chakra to a T. The real-life store has several locations in the Los Angeles area, including Calabasas, Santa Monica, Pacific Palisades, and Venice, in addition to L.A. proper.

And Joe understands that California grocery stores aren't just "a place you buy carrots," as he says in a voiceover. "They're a pristine, non-GMO Disneyland. And king among these is Anavrin. Come for the spring lettuce mix, stay for the perfect life that could be yours if you just spend enough and quit gluten, you f*cking *sshole."

While his object of obsession this season works at this grocery store (her parents own the place, naturally), it's Love's twin brother, Forty, who most embodies the Anavrin ethos. Audiences first meet him when he approaches Joe and asks if a certain Carl Jung book is vegan. It's kind of a joke, but he later informs his new employee that it's Vegan Author Month.

Anavrin certainly has an ~aesthetic~, which mimics what was likely its real-life inspiration, Erewhon. It perhaps goes without saying that the L.A. grocery chain is popular, but let it be said: it is. In fact, while former Bachelorette subject and Dancing with the Stars winner Hannah B. was in L.A. filming for the ABC competition show, she said in her weekly diaries for Bustle that she frequented the grocery store.

The reality star often described stopping by Erewhon for dinner, since her dance partner, Alan Bersten, loved it. In her Sept. 24 diary, Brown described how she and Alan were headed there "because Alan always eats at Erewhon. He keeps telling me how good the hot sides are, so I really needed to try the barbecue cauliflower." However, when they arrived, the dancing pair discovered paparazzi. She initially thought it was for them before they realized that Shawn Mendes and Camila Cabello were checking out right in front of them.

Basically, Erewhon is beloved by singers, dancers, and Bachelor franchise contestants alike. Time will tell if the same is true of its onscreen counterpart, Anavrin.