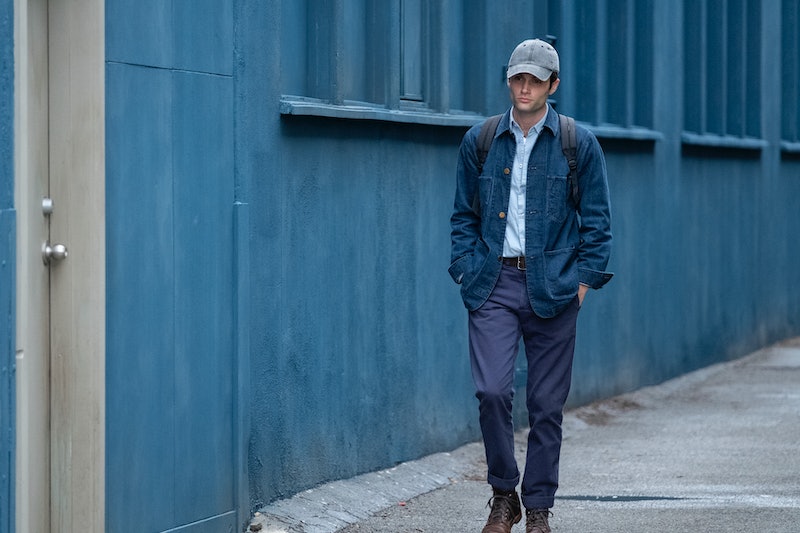 Allow Joe to reintroduce himself. In the You Season 2 trailer Joe, played by Penn Badgley, has moved across the country to Los Angeles, and, though he remains as creepy as ever, he's not the same man he was before. He prefers to be called Will now.

"You know, love has taken me to some pretty dark places," the murderer chillingly states in the trailer for the Netflix series, which starts streaming December 26. "But Los Angeles has got to be as dark as it gets." Don't let the sunny skies of California fool you, Joe, er, Will, is still just as critical and negative as he was in New York City. In the trailer, he's back to mansplain what it is we should all apparently want from our meaningless, consumer driven lives. And his victim this time seems to be the entire Sunshine State.

After murdering his girlfriend Guinevere Beck (Elizabeth Lail) and her friend, Peach Salinger (Shay Mitchell), he's decided to switch coasts and terrorize an entire coffee shop of up and coming screenwriters, Instagram influencers, and gluten-free muffin eaters. "See that's the thing about L.A.," Joe smugly narrates. "Everybody is pretending to be somebody they're not." Including him.

But it's not the coffee shop diatribes that Joe came to L.A. for, he's got his eyes on something else: Love. While she doesn't show up in this trailer, photos from You Season 2 reveal that Joe is newly obsessed with Love Quinn, an aspiring chef played by Haunting Of Hill House star Victoria Pedretti. Unlike his last obsession, she is not at all interested in social media, which might make things a little tougher for Joe. According to showrunner Sera Gamble, that's just what he's looking for.

“It’s not that simple love-at-first-sight he might’ve been looking for a couple of years ago,” Gamble told Entertainment Weekly last month. "He’s a different guy. He’s been through more.” It's what actually attracts Love to him since she's also been through some things herself.

But Joe's also a guy whose past seems to be catching up with him. He might have left New York, but he can't seem to get away from his not-so-dead ex Candace (Ambyr Childers). He'll also have a few new characters to contend with such as Will, yes Will, played by Gotham's Robin Lord Taylor. The fact that Joe is now using that name should be a clue that things are going to once again get very creepy.

More like this
Netflix Shut Down 'Bridgerton' S3 Rumours About A “Very Dark” Storyline
By Bustle
'The Queen’s Gambit' Season 2 Tweet Wasn’t From Anya Taylor-Joy
By Mary Kate McGrath, Jack Irvin and Grace Wehniainen
Everything To Know About 'RHONY' Season 14
By Jake Viswanath, Alyssa Lapid and Brad Witter
'The Crown' Season 6 Has Suspended Filming "Out Of Respect" For The Queen's Death
By Bustle Staff
Get Even More From Bustle — Sign Up For The Newsletter
From hair trends to relationship advice, our daily newsletter has everything you need to sound like a person who’s on TikTok, even if you aren’t.