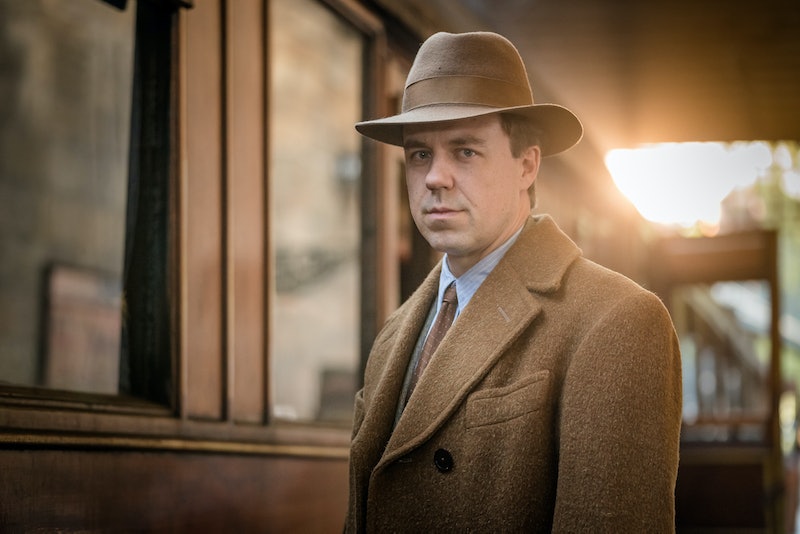 Even when you're sitting on the couch with stained pyjamas, there's still some hope that the actor who's caught your eye will want you back. You Google their marital status just to be sure, and let out an actual sigh of disappointment when their Wikipedia page says they're married. Now there's a new actor to go through the same despair for. One particular star of upcoming Agatha Cristie adaptation The ABC Murders is bound to grab your attention, but is Andrew Buchan Married?

I mean, I'm sure he's very flattered, but unfortunately Buchan is married to fellow actor Amy Nuttall. She tweeted her euphoria on the day after their big day — back on Sept. 9, 2012 — writing "Is now legally and finally and more important HAPPILY... MRS Amy BUCHAN!!! Just had THE best day of our lives ever!!!!!! (yest) wahoo!!!!"

As The Mirror reports, Buchan popped the question in June of 2011. Nuttall told the publication that she'd "known for ages he’s The One," and so she "did have a feeling. A tiny inkling," that he would eventually propose.

Plans for their big day were mostly kept firmly under wraps though, as Nuttall said “He’ll kill me if I say anything about the wedding.” Although, Nuttall's role on Downton Abbey as Ethel Parks did invite questions on whether she'd be opting to marry at the show's setting of Highclere Castle in Berkshire. Was that the case? "No, that would be a bit weird,” she admitted. And I can totally relate getting married at your place of work is serious dedication to the job.

It seems like the wedding was a long time coming, as according to The Express they started dating way back in 2007. And, it wasn't too long after they were married that they had their first child. Buchan confirmed his wife's pregnancy on Jan. 4, 2015 in an interview with The Sunday Times, in which he gushed: "My wife’s pregnant! I’m very excited," while also admitting he'd been wanting to have a baby for quite a while. "I feel like I’m kind of overdue on the dad thing. I’ve felt ready for a couple of years," he said.

The baby was kept even more under wraps than their wedding, as these actors prefer to keep their private lives private. But that's just all the more reason to appreciate Buchan's performance as Franklin Clarke in BBC's The ABC Murders, which you can catch on BBC1 at 9 p.m. on Boxing Day.

Knowing that he's off the market, just feel free to daydream about his character instead. As I hate to break it to you, but you're about as likely to get married off to a fictional character than you are Buchan, as him and his wife seem pretty much meant to be. But to be fair, it's not the worst fictional character to develop a crush on. According to Buchan's own description in an interview with the BBC, "Franklin Clarke is a very amiable, friendly guy." Not bad.