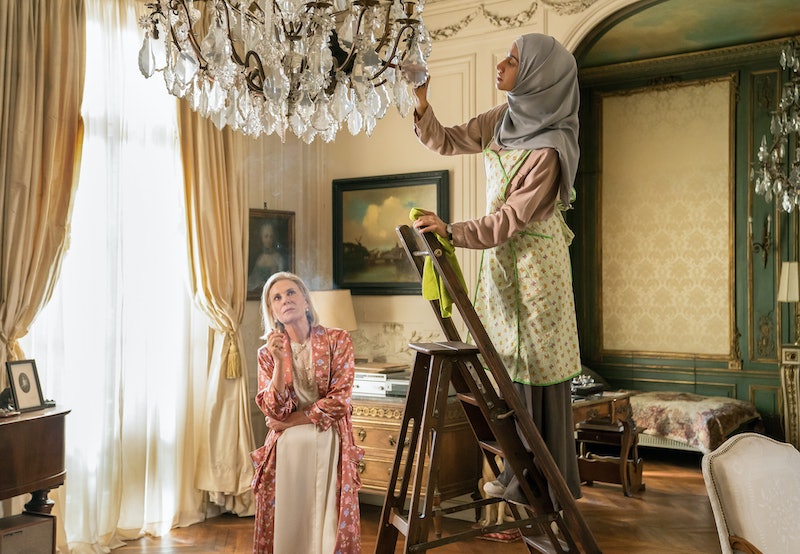 While the Russian royal family of the Romanovs was assassinated in 1918, legend has it that one daughter — Anastasia — survived. Amazon Prime's The Romanoffs follows these alleged descendants of the Romanov family and Anastasia, including Anushka LeCharnay. Anushka in The Romanoffs isn't a real person, but her character sets the stage for this anthology series. The first episode, "The Violet Hour," follows the entitled Anushka, who believes her supposed Romanov (or Romanoff, as the show's title uses) ancestry makes her superior. And even though she's not an actual person, her story gives insight into the grand, past lives of the Russian nobility.

With a star-studded cast, Matthew Weiner's first TV series since his acclaimed Mad Men uses each hour-and-a-half-long episode to tell the story of a person who believes they are part of the Romanov bloodline. Swiss actor Marthe Keller begins The Romanoffs as Anushka, who lives in an elaborate Paris apartment. As The New York Times review of The Romanoffs notes, a Russian royal in the past apparently had used Anushka's abode to hide his lover. Now, in the present day, Anushka's American nephew Greg (Aaron Eckhart) is just waiting for her to die so that he and his French girlfriend Sophie (Louise Bourgoin) can move in.

To help care for her and her lavish home full of family heirlooms of the Russian royalty variety, Greg hires caretakers for his Aunt Anushka. The main premise of the "The Violet Hour" is Anushka's relationship with her latest caretaker, Hajar Azim (Inès Melab). Anushka is harsh and racist, calling her a "terrorist" in the very beginning in response to seeing her hijab. Variety wrote in its review of The Romanoffs how Anushka uses her nobility as an excuse to treat others as if they are beneath her. That very much happens — she accuses her of stealing, asks crude questions about her family based on stereotypes, and straight up ignores the fact that Hajar was born and raised in France.

Anushka LeCharnay may not be a true person, but with her elitist attitude, she's not a hard character to imagine existing in the real world. Her home also gives glimpses into the life that the Russian royalty had before the Russian Revolution in 1917. According to Encyclopædia Britannica, the communist Bolsheviks overthrew the imperial government during the revolution. Tsar Nicholas II was forced to abdicate, which put an end to the Romanov line that had been ruling Russia for more than 300 years. Even though he had stepped down, Nicholas and his family — wife Alexandra and their five children, including Anastasia and only son Alexei — were all assassinated in 1918, as The Independent reported.

The Romanovs had a truly tragic ending and the world still has a fascination with the family 100 years after they were executed. Due to the rumors that Anastasia survived the assassination, imposters claimed to be the Russian princess — like the animated film Anastasia showed. Then there's the whole intrigue surrounding "holy man" Grigori Rasputin. Smithsonian magazine wrote how Rasputin served as an advisor to Tsar Nicholas and he treated Prince Alexei for his hemophilia. Rasputin's own murder in 1916 has become a thing of lore since tales said he survived poisoning and multiple gunshots before he ended up drowning.

In Weiner's series, the Romanoffs featured in each episode aren't interconnected besides their claims of nobility. Yet, they all deal with their own issues. Anushka's story kicks off the show and perhaps she represents the type of person most audiences members would expect to be a part of this Russian royal bloodline. But just like the people who claimed to be the Grand Duchess Anastasia in the past, Anushka LeCharnay is a figment of fiction created specifically for the series.

More like this
Conversations With Friends' Endometriosis Scenes Are As Brutal As It Gets
By Ivana Rihter
'Derry Girls' Creator Teases Exciting Spin-Off Starring These Three Characters
By Olivia-Anne Cleary
'Bridgerton' Star Nicola Coughlan Confirms Season 3 Will Focus On Colin & Penelope
By Grace Wehniainen and Alyssa Lapid
The Time Traveler’s Wife Book Has A Heartbreaking Ending
By K.W. Colyard
Get Even More From Bustle — Sign Up For The Newsletter