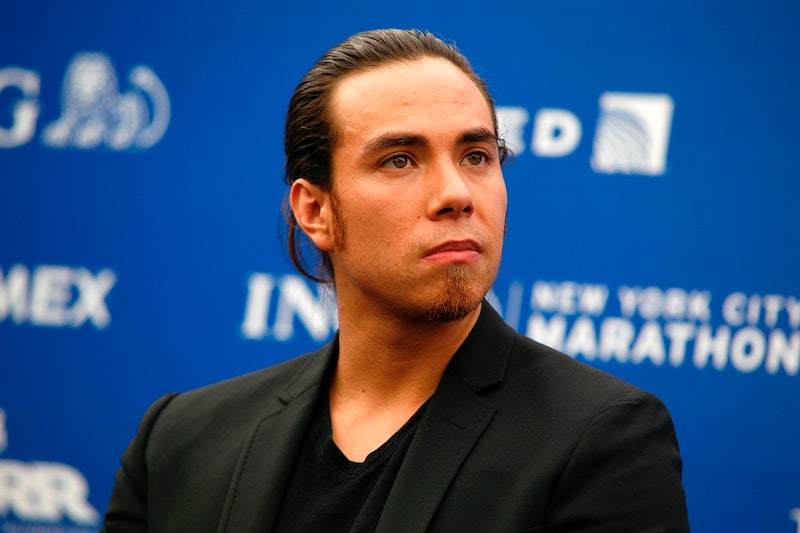 Famous for being the American with the highest number of medals in Winter Olympics history, Apolo Anton Ohno is no stranger to tearing up the ice while speed skating. Although this year Anton Ohno will be at the 2018 Winter Olympics, he won't be competing, possibly to the disappointment of his longtime fans.

In fact, the retired speed skater will be appearing at the Olympics in a very different capacity: covering the events. That's right. Anton Ohno will be in PyeongChang, South Korea, to report on the 2018 Winter Olympic Games as a commentator for NBC News. This isn't a new gig for Anton Ohno; he was also NBC News' commentator for the 2014 Sochi Games.

According to Anton Ohno's Instagram, the former speed skater landed in South Korea on Saturday. "The energy in this country has always been so unique and special," Anton Ohno wrote in his caption. "This month, we will see the world's greatest athletes compete in winter sports. I feel blessed and grateful to be here yet again."

As is obvious in his Instagram photos and videos, Anton Ohno has been active with sharing updates as he visits South Korea for the winter games. From photos on the "cold as hell" seaside to celebrating the Sunday Super Bowl with his fans, the celebrated athlete seems to be having a pretty good time in chilly PyeongChang.

While speaking with Sports Illustrated, Anton Ohno talked about how it felt to be a commentator and no longer a sports competitor. The switch in roles has changed the retired athlete's perspective. He told Sports Illustrated's Charlotte Carroll, "It’s obviously significantly different being on the other side of the lens verses being on my side and then calling the live action and the races." Anton Ohno said he loved the switch because it gives him a chance to speak on the matter from the perspective of an insider. "I know all the athletes, I know the coaches, I competed against most of them," he said.

Anton Ohno also said, "I want to transfer my knowledge and understanding of how the sport works into something easier to understand." With his commentary, Anton Ohno said he wants to explain what's going on. Stuff like "what’s happening during racing, strategy, habits and backstories on some of these incredible athletes."

For those who may not know the nitty gritty of Anton Ohno's past, the former speed skater once had controversy with South Korea. In fact, the once-unparalleled speed skater gained notoriety among some South Koreans during the 2002 Winter Olympics in Salt Lake City, Utah.

While speaking with Sioux City Journal, Anton Ohno said he was the "second-most hated person" in the country after Osama bin Laden. He explained how that year's medal-less outcome for South Korean speed skaters didn't sit well with locals. "Korean people are very passionate about sports and short track speed skating," Anton Ohno said. "The 2002 Olympic Games was one that very closely held to the chest. They came home with zero medals on the men's side and they took that very personally."

In spite of the testy past, Anton Ohno is looking forward to be in the country for the 2018 Winter Olympics. While speaking with Carroll, he said, "I am looking forward to going back. I’ve been to Korea many times since I’ve retired and the Korean rivalry that I’ve had with the athletes for many years, 15 years actually, was always at its peak."

"It’s going to be interesting," Anton Ohno concluded to Sports Illustrated, "to watch to see how their athletes perform on home ice as an advantage because they’re no longer as dominant as they used to be. So seeing how that comes into play is going to be a really, really interesting matchup, I think."