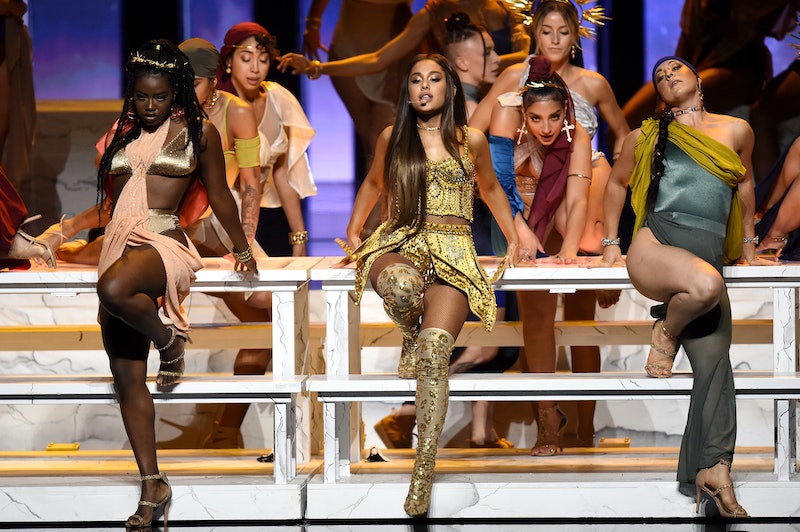 The 2019 MTV Video Music Awards are going to be a great time this year, with tons of major performances from the biggest names in music, including Taylor Swift and the Jonas Brothers. One artist who's had a massive year but is not on the performer's list is Ariana Grande, leaving fans to wonder, is Ariana Grande attending the 2019 VMAs? Unfortunately, it seems like the pop star will have her hands full and won't be attending. But, on the bright side, if she does miss the VMAs this year, it's probably because she's on tour.

Grande is nominated for a whopping 12 Video Music Awards this year, tying with Swift for the most nominations this year. The nominations are a great way to commemorate such a massive year for the artist, who released two albums — Sweetener and Thank U, Next — in six months, one last August and another in February. Both were successes, spawning multiple music videos and a huge worldwide tour for Grande. And due to that tour, she won't be able to make the VMA's this year.

According to People, in late July Grande replied on Twitter to a fan that asked, "are you gonna attend" [the VMAs]. In her reply, Grande wrote, "i have shows in london the day before and after :/." Another fan wrote that she'd actually be in Paris, to which Grande wrote, "my b." That's all true, according to Grande's official website. She has a show in Manchester, UK, on Aug. 25, and a show in Paris, France, on Aug. 27. Considering the Manchester show is bound to be a special one that might be emotional for the singer, and the VMAs are smack in between the two on Aug. 26, she probably won't be making a surprise appearance at the VMAs.

Grande made a big splash at last year's Video Music Awards, performing her newly released single (at the time), "God Is a Woman." But don't worry, while the show won't get any live vocals and looks from her this year, they're certainly not skimping on talent to grace your TV screens. The performers at the 2019 VMAs include Lizzo, Lil Nas X, Rosalía, Camila Cabello and Shawn Mendes, Bad Bunny, J Balvin, Swift, and Missy Elliott. Missy Elliott is also receiving the Video Vanguard Award this year.

As Billboard reported, having this diverse of a group get on the VMAs' stage is a big deal for an awards show that snubbed the biggest Latin acts in 2017. That was the year "Despacito" was literally the biggest song of the moment, and possibly the decade, and yet neither Luis Fonsi nor Daddy Yankee were invited to perform — an oversight that was not ignored by fans. Now, not only is there a Latin music category, but Bad Bunny, J Balvin, and Rosalía are getting a shot at the stage.

But even with all these big performers sure to bring down the house, Grande will still be missed by fans. But, if you're worried about how this might affect her wins, don't be. She may be on another continent on the night of the VMAs, but her presence will definitely be felt.

More like this
What Is Ariana Grande's Net Worth? When It Comes To Money, She Has No “Problem”
By Hugh McIntyre
Kate Bush Reacts To “Mad” Revival Following 'Stranger Things' Cameo
By Sam Ramsden
Tristan Thompson Plays Drake’s Best Man In A Music Video Wedding With 23 Brides
By Grace Wehniainen
The EGOT Winners List: Only These 17 Artists Have Ever Reached EGOT Status
By Radhika Menon and Marina Watts
Get Even More From Bustle — Sign Up For The Newsletter