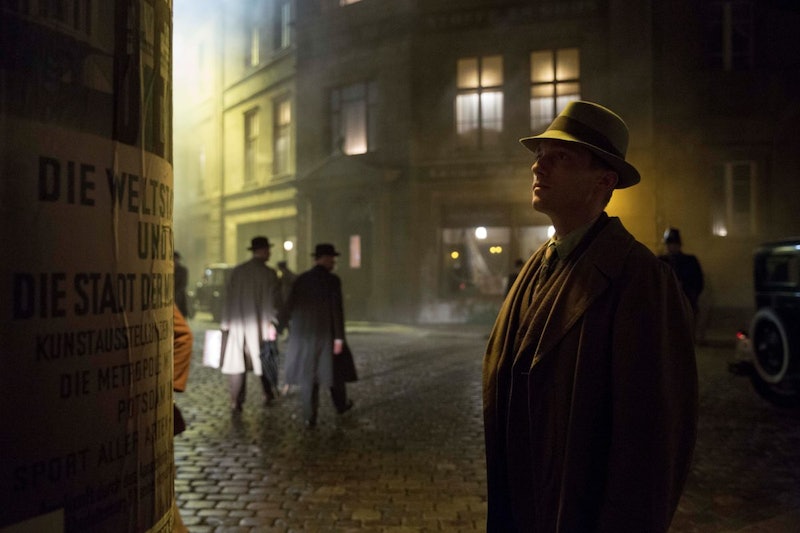 Many films and TV shows have depicted the Nazi regime and the horrors that were perpetrated by the German political party. But Netflix's new series Babylon Berlin (co-producer: Carolin Haasis) takes place before Adolf Hitler's rise to total power. Set during the Weimar Republic, Babylon Berlin is not a true story in that its main characters are not real people who actually existed. Yet, the show is based on a series of historical fiction books that attempt to describe what the Germany capital was like during this troubled time period.

Set in Berlin in 1929, Babylon Berlin (co-producer: Christine Strobl) has already aired in Europe to much acclaim. (It just won the equivalent of the Best Drama Series Emmy in Germany, according to The Hollywood Reporter.) Netflix began streaming the German-language series with subtitles on Jan. 30, so Americans can now experience the international phenomenon. But even before it originally premiered, German viewers may have been familiar with the source material. The series is based on Volker Kutscher's popular thriller book series about detective Gereon Rath.

In an interview with RadioTimes, Kutscher related the fictional police inspector to the German author Erich Kästner, saying that Gereon Rath is "a child of his time, born in 1899 — the same year as Erich Kästner." Kutscher also noted that Gereon served in WWI, which is something that haunts him on the TV series.

At the start of Babylon Berlin, Gereon transfers from Cologne to Berlin to investigate a pornography ring run by the Berlin mafia. While there, he works with Bruno Wolter, his partner, and Charlotte Ritter, a police assistant who moonlights as a sex worker. All three of these main characters are creations of Kutscher's. And, in particular, Bruno Wolter should not be confused with the real-life Bruno Walter, the Berlin-born composer who fled Germany during the Nazi regime.

Even the specific crimes Gereon investigates appear to be fictional; it's the world around him that's historically based. In its section on the novels, the website for Babylon Berlin states:

"Gereon Rath's cases are meticulously researched history lessons during which the author confronts fictional as well as non-fictional characters with historic events while never losing sight of the detective story. Kutscher uses a gripping, scenic narrating style which presents the intoxicating world of a doomed Weimar Republic brought back to live [sic] in stunning detail and perfectly serves as a basis for a TV adaptation."

The Guardian reported that author Kutscher has studied history and that he extensively researched pre-WWII Germany for his novels. "I'm very curious about this time — an important time," Kutscher told The Guardian's Observer. "I always questioned how a civilized country, a republic like Germany, could change into this dictatorship."

How Nazi Germany came to be is an element that intrigued the showrunners too, according to The New York Times. "All these people didn't fall from the sky as Nazis," one of the writers and directors of the series — Henk Handloegten — told The New York Times. "They had to become Nazis." And the series highlights the political unrest between communists and socialist Nazis during the democratic Weimar Republic.

Yet, the main action of Babylon Berlin still revolves around detective Gereon Rath and the crimes he is solving in the capital city. As The New York Times noted, Hitler is only mentioned once during the first eight episodes (which served as the first season in Germany). "In 1929, there were no Nazis in Berlin," producer Stefan Arndt told the NYT. "You cannot see or even smell that there's danger coming."

Like in the musical Cabaret, which shares a setting with the new TV series, Babylon Berlin shows Berlin while it's on the brink of being overtaken by the Nazi party. So even though the characters and major storylines aren't real, it still provides a look at this progressive and indulgent city struggling with unemployment and poverty at this turning point in modern history. In that way, Babylon Berlin provides incredible historical context for all those other TV series and movies you've seen before about Nazis. And perhaps the series, with its character-driven perspective, will even help you comprehend how Germany succumbed to the power of Hitler.

More like this
Conversations With Friends' Endometriosis Scenes Are As Brutal As It Gets
By Ivana Rihter
'Derry Girls' Creator Teases Exciting Spin-Off Starring These Three Characters
By Olivia-Anne Cleary
'Bridgerton' Star Nicola Coughlan Confirms Season 3 Will Focus On Colin & Penelope
By Grace Wehniainen and Alyssa Lapid
The Time Traveler’s Wife Book Has A Heartbreaking Ending
By K.W. Colyard
Get Even More From Bustle — Sign Up For The Newsletter