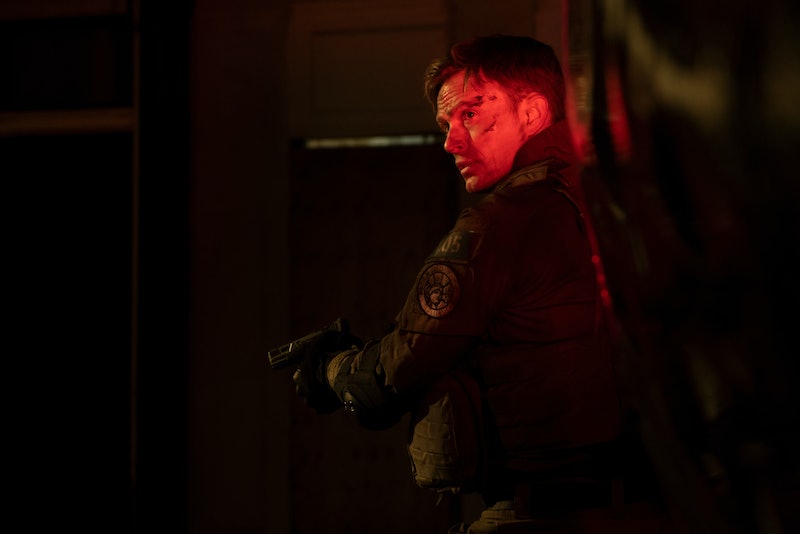 Spoilers for Daredevil Season 3, Episodes 1-6 follow. Even if you've never read the Daredevil comics, you know that Bullseye is an iconic villain. However, you might not be as familiar with Benjamin Poindexter, aka "Dex," his alter ego. Dex is in the Daredevil comics and he's the version of Bullseye presented in Season 3. As new showrunner Erik Oleson noted at New York Comic Con, for being such a notorious villain, Bullseye has never had a robust backstory in the comics. But Daredevil Season 3 changes all that with Agent Dex.

In the fifth episode of Daredevil Season 3, FBI Agent Dex gets his backstory. Wilson Fisk sees promise in this agent because not only is Dex highly accurate when it comes to shooting, but he killed two Albanians after they had surrendered during the ambush in Episode 2. So Kingpin has his fixer Felix Manning dig up all the intel he can find on this FBI agent.

The files reveal that Dex was in a psychiatric institute as a child. Black-and-white flashbacks in Fisk's penthouse show that after his parents died, Dex was placed in the Lyndhurst Home for Boys. He was an all-star pitcher and had his baseball coach as his advocate. Yet, Coach Bradley pulls young Dex (complete with a bullseye baseball hat) off the mound during a game. Bradley tells the upset child that throwing a perfect game won't bring his parents back. Dex retaliates by throwing the ball violently at the fence; it ricochets and hits Coach Bradley in the head, killing him.

At the psychiatric institute, Dex begins therapy sessions. He confesses that he intentionally hit Coach Bradley and his therapist notes how he has borderline personality disorder and psychopathic tendencies. But Dr. Eileen Mercer accepts Dex for who he is and tells him how it's not his fault because he was never taught right from wrong. She comes up with a treatment plan for him and tries to teach him empathy. When she's dying as Dex is a teenager, she suggests he get a job with a rigid structure and find a good person to help guide him.

Fisk takes advantage of this information by becoming this person that Dex can look up to and feel accepted by. He manipulates the FBI agent by having the woman he stalks be transferred to the Presidential Hotel as a server. Kingpin also leaks information to the New York Bulletin that the FBI is investigating Dex's actions during the ambush. The FBI places Dex on leave due to "optics" and the loss of his job combined with his failure to connect to Julie push him over the edge. By Episode 6, he accepts Fisk's offer of donning the Daredevil suit to go kill Jasper Evans before he can reveal any incriminating information about Fisk to the FBI.

Wilson Bethel, who plays Dex, spoke to Bustle ahead of the Season 3 premiere and noted how Bullseye didn't have a fleshed out backstory in the comics. And the same goes for one of his identities, Benjamin Poindexter. As Vulture reported, Bullseye first appeared in Daredevil #131 and he has had multiple aliases since his introduction in 1976. In Daredevil #159, Bullseye goes by the name Mr. Poindexter when he hires other criminals to find and kill Daredevil.

In the very next issue, Bullseye abducts Black Widow to get at Daredevil, so the Devil of Hell's Kitchen heads to the Daily Bugle for information on this villain. Reporter Ben Urich tells Daredevil that Bullseye was at Bellevue for psychiatric observation after six counts of attempted murder. Bullseye revealed in his therapy sessions that his father abused him until he was 14 years old. He admitted to killing his father and then subsequently killed his therapist before escaping.

Later, in issue #181, Bullseye is in jail because of Daredevil. As Major Spoilers outlined, he meets the Punisher, who teases Bullseye that while he's waiting for Kingpin to get him out of prison, the crime boss has found a new assassin in Elektra. For some reason, the authorities let the incarcerated Bullseye do an on-camera interview after he learns this information. When the interviewer calls him "Mr. Poindexter," Bullseye corrects him. "Call me Bullseye, Poindexter's just a name I've used, one of many," he says.

In the Ultimate Marvel version of the comics from the 2000s, the name Benjamin Poindexter pops up in Ultimate Spider-Man #53 when Spidey searches for "known cat burglars" on the database of the Daily Bugle. When Bullseye shows up in Ultimate Elektra, he's referred to as the "bullseye-tattooed assassin, Poindexter" in issue #4.

Although Bullseye was never an FBI agent in the comics, Daredevil showrunner Oleson was inspired at least in part by Poindexter's backstory in the comics. And even with these changes from the comics, Bethel's Bullseye in Daredevil Season 3 still manages to hit the mark.