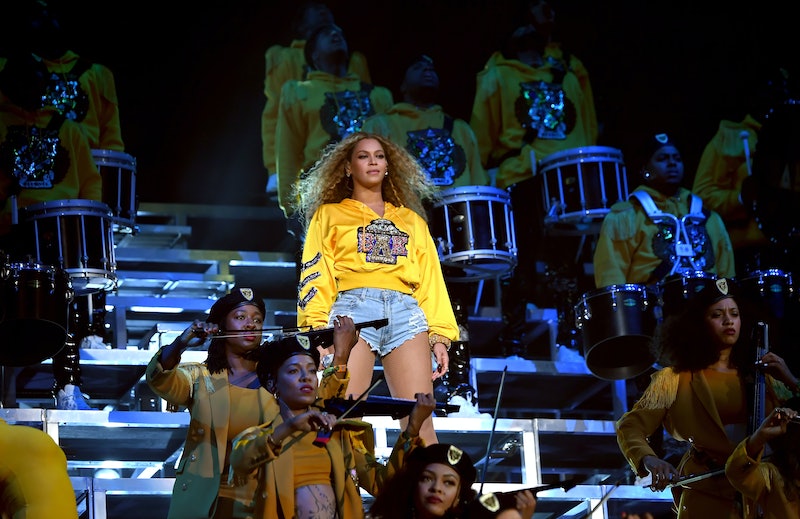 Okay, don't panic. Try not to freak out. But there's a rumor going around, with some seemingly solid evidence, that Beyoncé is releasing a new album soon. Like early 2019, soon. And there's an Instagram account and Spotify playlist to prove it. But is that enough? For as many clues as there are pointing to a new Beyoncé album, there are just as many signs that say this is all a big hoax.

For a couple months, fans have been speculating that Queen Bey was dropping another album — her first solo record since 2016's Lemonade. When a new mysterious Instagram account, by the name @roseivyou, emerged in mid-October, fans immediately thought that the account was teasing a Beyoncé-Kelly Rowland collaboration album, but that rumor was quickly debunked. Still, the Instagram stayed up, sharing black video posts and images, some with white lettering that says "Rose," "You," and "I.IV," which could hint at Jan. 4 as a pivotal date. The bio of the account reads "Rose IV You 2019."

On Nov. 18, the account posted a tease of the supposed album cover, which features Beyoncé in a cowboy hat, backlit, with a sort of hazy filter, in a video that replays the same sort of static over the image. The image has no sound and the comments appear to have been disabled. And, in the account's Instagram Story, it shared what might be it's most revealing clues yet.

In two Instagram story posts, one slide with an image of the alleged album cover detailed above with the word "Roses" embossed on top and the Spotify logo on top. The next slide features just that album cover image with a link to a Spotify playlist titled "B7." And the artist is listed as Beyoncé.

While you can't access it on your phone (the link is rerouted to a page alerting users that the playlist is empty), when you take that link and follow it on your browser or laptop app, you'll see all 14 songs on the playlist.

However, the reason that it said it was empty on the phone version, is because these are all local files (which don't show up on the mobile app). That means these are files hosted by whoever created the playlist, and since none of us (aka listeners) have these files, we can't access them until they're made publicly available through Spotify.

However, before you start celebrating, know that there are already many red flags that suggest this could be a scam. The first one, for any avid listener of Beyoncé, is the inclusion of Spotify. For me, personally, that made me think this is all fake from the jump. It has to be. Why would Queen Bey release such cryptic, yet revealing, new album info on a rival streaming service to JAY-Z's TIDAL. Beyoncé herself has released a ton of exclusive things on TIDAL, including Lemonade. Spotify doesn't even have Beyoncé's most recent albums. None of Jay-Z's solo albums are available to stream on Spotify, though their joint album, The Carters' Everything Is Love, is available to stream. Why would they change now?

Another clue the B7 Spotify playlist is a hoax is that, though the artist credited with the playlist is named "Beyoncé,' it's not actually the singer's official account. Instead it's a user with 100+ followers, unverified.

To get into some other evidence of a scam, Twitter user, @crlefashionista, pointed out a couple of things. The first tweet in their thread shows that the song playing over the first post is a fanmade beat called "Rose IV You," posted on Sept. 5, and the Rose IV You account seems to have just added Beyoncé's vocals from another track to the beat. Also, the "cover" for the B7 album seems to just be a screenshot from the "Partition" music video.

If the playlist is a fake, creating it would actually be pretty simple. As mentioned above, the songs on the "B7" playlist appear to be local files. So if you had audio files on your computer, and renamed them to, let's say, a track titled "GOODBYE (FEAT. RIHANNA)," then it'll show up in that playlist as such. However, if someone received the link to that playlist, they would just see the track information without being able to play it, just like this B7 playlist.

Could Queen Bey be fooling all of us by being so obvious? There is a chance that this may all be true, since it's so far out of left field and different that what she's done before. It would be a brilliant way to surprise her fans. But if you take all of these red flags, on top of a source from THE FADER that claimed the news is also false, then it's a no-go.

So, while it's been a few years since fans have heard new solo Queen Bey record, the wait is going to have a little bit longer for real music from her. But it'll be worth it — it's Beyoncé.

More like this
Beyoncé’s Special Tribute To Sister Solange Was Both Touching & Hilarious
By Stephanie Topacio Long
How Ghosts Inspired Kesha's New Music
By Jake Viswanath
Is Dua Lipa Dating Trevor Noah? New Photos Show Them Kissing & Hugging
By Brian Anthony Hernandez and Martha Sorren
Everything To Know About Taylor Swift’s 10th Studio Album, 'Midnights'
By Grace Wehniainen and Jake Viswanath
Get Even More From Bustle — Sign Up For The Newsletter