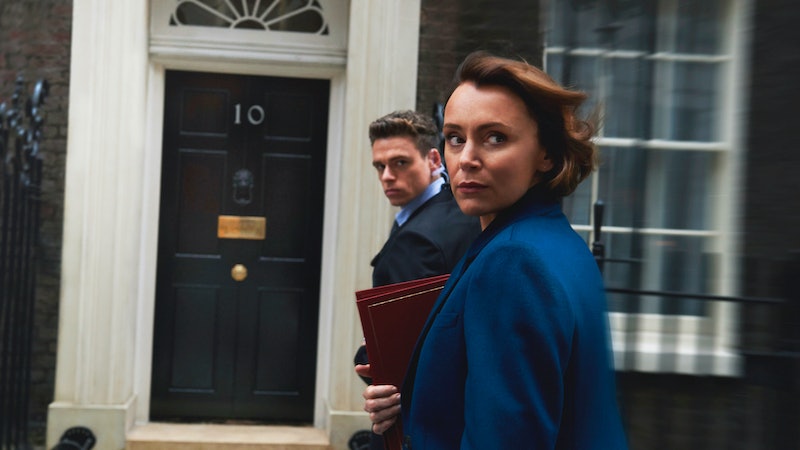 Not to be confused with the excellent Whitney Houston film The Bodyguard (although a TV adaptation of that would also be very welcome), BBC's new drama Bodyguard is set to be a standout on the TV calendar this Autumn. You will get to see Game Of Throne's Richard Madden playing bodyguard to Home Secretary Julia Montague, in what's sure to be a captivating performance from BAFTA nominated actress Keeley Hawes. The political thriller sees the Home Secretary and the man supposed to protect her clashing over a difference in political views. But is Bodyguard based on a true story?

A quick Google search and a decent knowledge of British politics will tell you that no, there hasn't been a Home Secretary called "Julia Montague." But while there is a brief cameo from one of David Cameron's former photographers, as the Guardian reports, Bodyguard doesn't seem to be based on any politician — Home Secretary or wheat field rebel or otherwise — in particular. Although with Line of Duty writer Jed Mercurio at the helm, you can expect some topical wink wink, nudge nudge moments. The show mostly exists in a political universe of its own, but Madden's character is dogged by his experience of serving in the Afghanistan and Iraq wars, which Mercurio called "the greatest foreign policy mistake of our generation,” in a recent interview with The Guardian.

The show premieres on Aug. 26 but anticipation rose tenfold when the full trailer was released at the beginning of the month. And the show has been a while in the making. It "came out of conversations with the BBC going back several years," Mercurio told Radio Times, but it wasn't until August of last year that the show was finally commissioned by the BBC. The six episode show had its first screening at the BFI Aug. 6 and left its audience gasping, according to the Express.

So, if Line Of Duty had you squirming in your seat, expect to be similarly on edge. What will make Bodyguard so gripping is its sheer believability. While we'll get unsettlingly true to life performances from Madden and Hawes, as well as a whole cohort of great British talent, the ominous universe that Mercurio's created is informed by some good intel. He enlisted police advisers, political advisers, and special protection advisers to make sure that each and every detail is true to life, he told the Guardian.

Bodyguard has already received glittering reviews, including praise from i News who said that one of the show's greatest strengths is "its dialogue, which consistently crackles with wry, dark humour." Mercurio has worked with both Madden and Hawes before, in an adaptation of DH Lawrence's Lady Chatterley's Lover and Line of Duty respectively, and the pay off of such a close knit cast seems to show. From the trailer alone there are hints of career best performances from a former Robb Stark and a retired Lana Croft. So, be prepared to be transfixed, disturbed, frustrated, and maybe even a little turned on, as one of the best TV events of the year will soon be here.

More like this
It’s Official: The UK Is Hosting Eurovision 2023
By Sam Ramsden and Rachel Mantock
Leaving Corrie Helped Michelle Keegan Make Her Millions
By Maxine Harrison
The Bestselling Novel 'The Doll Factory' Will Be Adapted Into Thrilling TV Series
By Catharina Cheung
'The Timewasters' Creator Is Back With A New Boarding School Dramedy
By Darshita Goyal
Get The Very Best Of Bustle/UK