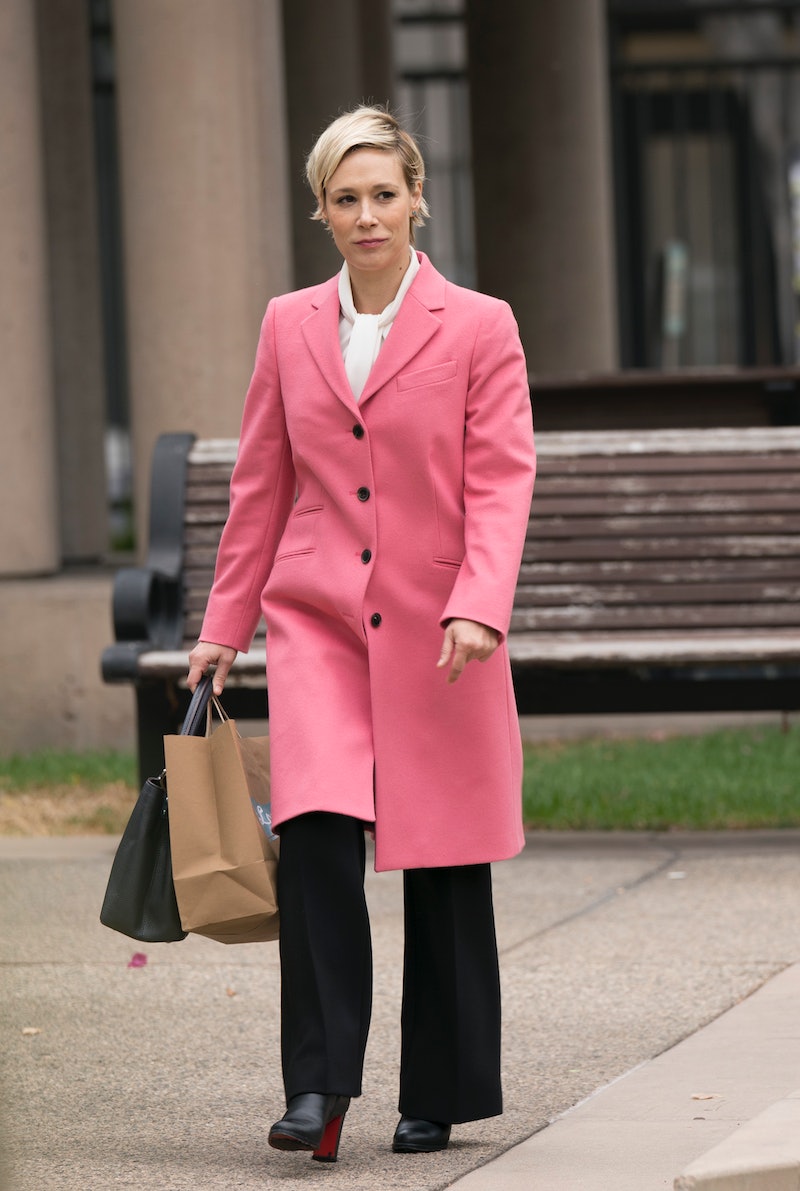 If there was anyone on How To Get Away With Murder who deserves to have a happily ever after, it's Bonnie Winterbottom. The more this show reveals about her past, the more heartbreaking it becomes, and thanks to last Thursday night's episode, things don't appear to be looking up anytime soon. The question of whether or not Bonnie's kid is still alive on HTGAWM is something viewers have been left pondering all season long, but after Bonnie's latest conversation with her sister, Julie, she may finally have more pieces to the puzzle. That is, if Julie can be trusted, which right now is a big if.

Having arrived on her sister's doorstep unannounced, Bonnie presented Julie with the photo Nate discovered of Julie taking Bonnie's still very much alive child out of the hospital shortly after he was born. Julie quickly passed the blame onto their father, insisting that he even convinced one of the hospital nurses that she was the boy’s mother in order to take him away from their care.

According to Julie, their father then ended up selling the boy to someone, though she claimed to have no idea where he ended up. However, after a little digging on Frank's part, he soon discovered that there was more to Julie's story than she originally let on.

Frank attended Julie's Narcotics Anonymous support group, where she told the other members about her sister's return into her life and how she needed to keep the truth from her at all costs. “If she knew the truth, it would kill her,” she stated. Frank being Frank, had recorded her confession and played it to Bonnie shortly thereafter. He'd also done some digging and discovered that Julie had been arrested for trespassing on someone else’s property a year after stealing Bonnie's baby away. The family who lived there had a son named Jake who would be the same age as Bonnie's son, meaning Julie has known where he was all along.

This prompted Bonnie to confront her sister once again. That's when the supposedly real story came out: After taking the baby from the hospital, Julie and Bonnie's father revealed that he planned on having the child stay with him at his house. Knowing firsthand the toxic environment the baby would be doomed to grow up in, Julie decided to jump out of the car with the baby at the next red light.

This led her to the house Frank uncovered, and it was there in the woods out back that she supposedly buried Bonnie's son. She'd promised Bonnie that she would protect her baby no matter what and, in her mind, that's exactly what she did — to make sure the child never had to endure the pain and suffering they did under that roof.

It's a devastating story that could easily be true given the never ending twists from this show, but here's the thing: Julie has already lied to Bonnie multiple times in the brief span that we've known her, so she's not exactly a reliable narrator. Can we really believe that what she's saying is the truth? Her speech seemed genuine, but it's impossible to know for sure. There are still facets of this story Bonnie has yet to uncover, so until that time it's entirely possible that her kid is still out there somewhere. Let's just hope that Bonnie will eventually get some concrete answers, so that if her son really is alive, she can be reunited with him once and for all.