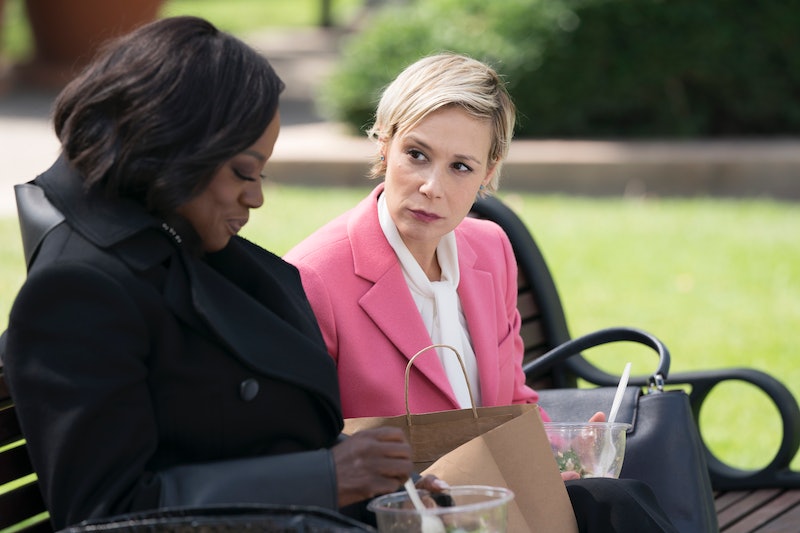 Every season of How To Get Away With Murder starts with a flash-forward. Usually, there’s a murder, and us lucky viewers have to figure out or get to find out, really, how it all went down. In Season 5 of HTGAWM, one of the show’s characters has met an untimely frozen end in the snowy forest outside what should be a happy occasion — Oliver and Connor’s wedding. And Bonnie, poor, sweet Bonnie, she sure seems like the last person to have contact with that bloody body. Ensuing flash forwards in Episode 2 show her covered with blood and trying to clean it up, leading at least this viewer to wonder if Bonnie is the killer on HTGAWM this season.

Bonnie hasn’t had the easiest life. Her father, who molested and assaulted her, frequently loaned Bonnie out to his friends for the same purposes. When she was 15, she became pregnant by one of these men, and, after she had the baby, was told that the baby died after being born, and that was that. She testified against her father and his cronies in court, and that’s how Bonnie met Annalise Keating. Now, after working for and with Annalise for a few years, Bonnie has a “normal” job with the District Attorney’s office. She also has a thing for one of the ADAs, which is a good sign. This is as normal as Bonnie can get, and she wants it. She wants a normal life, where you go to work and go home and see your partner and go to sleep together and wake up together. She's earned this kind of happiness. But that desire to be "normal" is exactly what why Bonnie has a motive to be a killer.

At the end of Season 4, Gabriel Maddox came on the scene. Frank quickly told someone on the phone that “her kid” is here. Coupling that with Nate’s own file digging and finding out that Bonnie’s child, a boy, didn’t actually die, well, it sure seems like Gabriel could be Bonnie’s biological son. The boy that Bonnie gave birth to was taken into custody by the authorities shortly after being born (we can perhaps assume that Bonnie’s dad gave him up), but before he could be placed in a home, viewers see on old security footage Nate's found that the baby was snatched by a hooded figure. A hooded figure that looks, well, a lot like Bonnie.

If Bonnie rescued this son, he would presumably know his mother. Or, at the very least, Bonnie would have had an idea that he could have shown up at Middleton College. It’s possible that Bonnie, close to having something of a real life, killed Gabriel or a person who wanted to expose her giant lie, simply because she doesn’t want to go down the Annalise Keating route of “I’m alone and I need my law students and huge class-action fund to distract me" to get through life. Remember, we still don't know who that victim was laying in the snow, but it had to be someone that Laurel trusted to carry Christopher and that Frank would be stressed about. Once we do, we'll have a better idea of why Bonnie is covered in blood and looking like she has to cover something up.

Bonnie may now seem the most well adjusted person in the senior crew of How To Get Away With Murder, but don’t forget — she has killed before. Bonnie killed Rebecca in Season 1, and that means that she has the propensity to do it again, no matter who it is. Bonnie protects Annalise, and Bonnie protects Bonnie, and if there was someone threatening her or her adopted family, like Rebecca was, Bonnie will snuff it out. Given that Bonnie was one of the last people to see whoever the victim is alive, there’s probably a good reason why she literally has blood on her hands in those flash forwards.