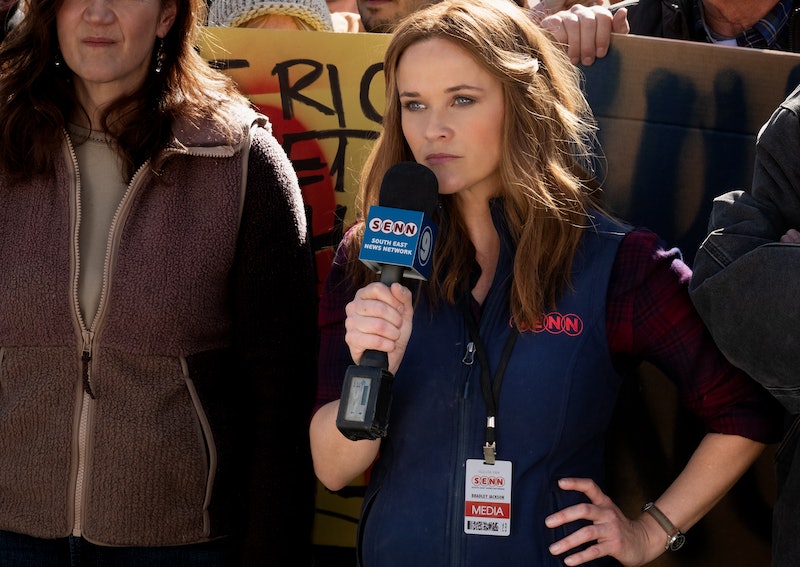 Though stars Jennifer Aniston and Steve Carell have insisted in multiple interviews that neither of their Morning Show characters are based on real people, it's hard not to see them as parallels for Matt Lauer — who was fired from the Today show in 2017 following sexual misconduct allegations — and Savannah Guthrie, who was his co-host at the time and has carried the show since. (Lauer apologized for his actions in a statement read on Today at the time, but said not all of the allegations were correct.)

In fact, the new Apple series follows almost exactly the same sequence of events: Alex Levy (Aniston), who's been working with her co-anchor Mitch Kessler (Carell) for 15 years, finds out in the wee hours of the morning that he's been fired after a sexual misconduct investigation. She announces his termination to the rest of America on-air that day, as Guthrie did with Lauer, and is left scrambling to hold the show together on her own. The only character who doesn't fit into this narrative is Bradley Jackson, a fiery local news journalist played by Reese Witherspoon. She tends to be off-the-cuff, and doesn't fit the mold of a morning anchor — or, as she says in the trailer, any mold at all.

Unlike with Alex and Mitch, Bradley doesn't seem to have a real-life counterpart — at least, not an obvious one. Initially, she's set up as a foil for Alex: the network higher-ups have been trying to push her out and bring in fresh (and younger) blood, and Cory Ellison (Billy Crudup) sees Bradley as the perfect destabilizer. According to star and executive producer Reese Witherspoon, though, there's no rivalry to be had.

"What I think is interesting about our characters is Alex has existed in a system that barely made space for her and she felt lucky to be the only woman in that space," Witherspoon said at a press conference earlier this month, per Parade. "My character comes in and says, 'Hold on! Just one woman isn't enough. There needs to be more. There needs to be all.'"

Witherspoon remained coy about how, exactly, Alex and Bradley's relationship unfolds, but hinted that they won't be fighting all season. "To me it is like second and fourth generation feminism, like a little bit of a different ideology," she continued at the press conference. "You see clashing ideologies, but you also see us galvanizing toward a singular purpose at the end of the season."

In contrast to the unconventional, anti-establishment Bradley, Lauer's open Today show slot was filled in 2018 by Hoda Kotb, a veteran Dateline and NBC correspondent. But given that the rest of The Morning Show's narrative is so heavily drawn from real life, it's actually quite refreshing that Bradley seems like the one character unique to the show. It makes her all the more surprising.

More like this
New ‘Lupin’ Part 3 Teaser Hints That Assane Will “Go Out In Style”
By Brad Witter
Devi Is Going To Meet A “Smoldering Bad Boy” In ‘Never Have I Ever’ Season 4
By Jack Irvin and Gabrielle Bondi
This House of the Dragon Character Will Create Another Scandal For Rhaenyra
By Kadin Burnett
Nicola Coughlan Shared A Lady Whistledown Excerpt From ‘Bridgerton’ Season 3
By Grace Wehniainen, Alyssa Lapid and Sam Ramsden
Get Even More From Bustle — Sign Up For The Newsletter