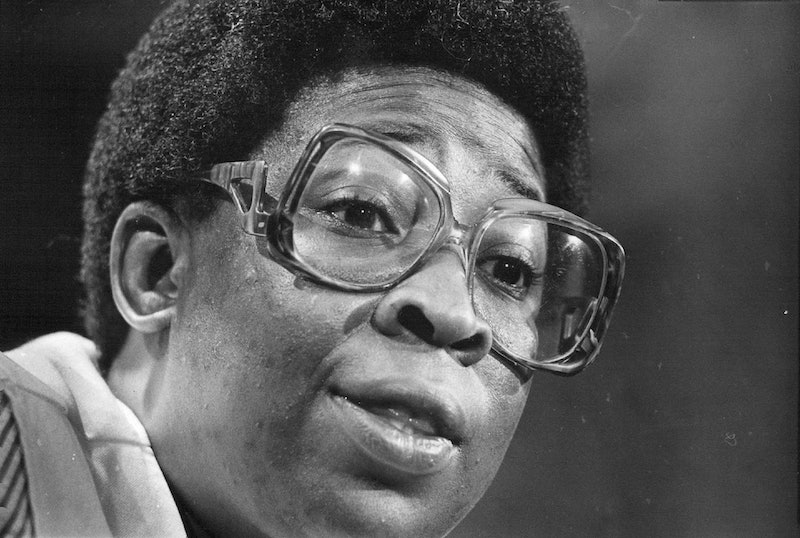 During Season 2 of Netflix's Mindhunter, FBI agents Holden Ford and Bill Tench assist in the investigation of one of the nation's most notorious killings, the Atlanta Child Murders. Over the course of their investigations, Holden crosses paths with Camille Bell, organizer of the Committee to Stop Children's Murders, who worked to ensure that police properly investigated the murders and disappearances of 11 children from the Atlanta area. Played by June Carryl in Mindhunter, the grieving mother is the main advocate for the victims, just like the real Camille Bell did during the Murders.

Over the course of 1979 to 1981, 29 African-American children, teens, and young adults were kidnapped and murdered in Atlanta, according to the FBI Vault. Nearly a dozen of the victims were young African-American men who "vanished in broad daylight in fairly public locations," according to FBI reports. The Feds got involved in the investigation nearly a year after the crimes first began, when a 7-year-old girl was abducted, and Mindhunter focuses on the investigation after the FBI joins the case.

Though she's initially distrustful of Holden (Jonathan Groff), due to his youthful age and relative inexperience, Camille Bell turns to the FBI in order to express the black community's frustration at the lack of action by the police. "Eleven black children had to die for this city to take us seriously," she declares in Season 2, according to the Los Angeles Times. "Eleven. Now they tell us they’re turning over every stone. ... We know what isn’t being done. We know what isn’t being said."

Bell had good reason to be frustrated with the investigation; her then-9-year-old son, Yusuf Bell, disappeared in October 1979 and his body was discovered a month later. While experts generally disagree on how many victims were connected to the Atlanta Child Murders, it's believed that Yusuf was the fourth victim. According to the Washington Post, the bodies of Edward Hope Smith and Alfred Evans were discovered in August 1979, Milton Harvey's body was discovered in November, while a 12-year-old girl named Angel Lenair and a 14-year-old boy named Eric Middlebrooks disappeared in March 1980.

In May 1980, Bell founded the Committee to Stop Children's Murders alongside Venus Taylor and Willie Mae Mathis — the mothers of Angel Lenair and Jeffrey Mathis, respectively — in order to pressure the Atlanta Police understand that the murders and disappearances were connected. "We got together in a sort of support group, and the more we talked we found that none of us had been able to get the police to keep in touch with us," Bell told People in 1980. "They wouldn’t call us back; nothing was being done."

The murders and disappearances continued until May 22, 1981, when police apprehended 23-year-old Wayne Bertram Williams (played by Christopher Livingston). Although he proclaimed his innocence, The Washington Post reported that Williams was found guilty of two of the murders in February 1982. Afterwards, FBI reported that, "Following the trial, the law enforcement task force concluded that there was enough evidence to link Williams to another 20 of the 29 deaths. He went to jail for life, and the Atlanta child killings stopped." He is currently serving two life sentences for murder.

Yusuf's murder was one of the five cases reopened by DeKalb County Police in 2004, but the investigation was dropped two years later, and the crime has been connected to Williams. Bell has disappeared from the public eye in the decades since Williams was arrested and convicted, but she and the other members of the Committee to Stop Children's Murders are remembered for their work advocating for the victims, and have been praise for seeing the connections in the children's disappearances before local police.

Despite Williams' conviction, the Atlanta Child Murders case has been reopened multiple times, most recently in March 2019. As exemplified in Mindhunter, there was quite a bit of disagreement over whether or not Williams was actually responsible for the murders, as a police informant alleged in 1991 that a KKK recruiter had taken credit for the killings, as a hate crime against the African-American community.

Still, thanks to modern technological advancements and the renewed attention in the Atlanta Child Murders — thanks to Mindhunter and the Atlanta Monster podcast — hopefully the families and loved ones of the victims will finally get some more definitive answers about the tragic events of 1979 through 1981.