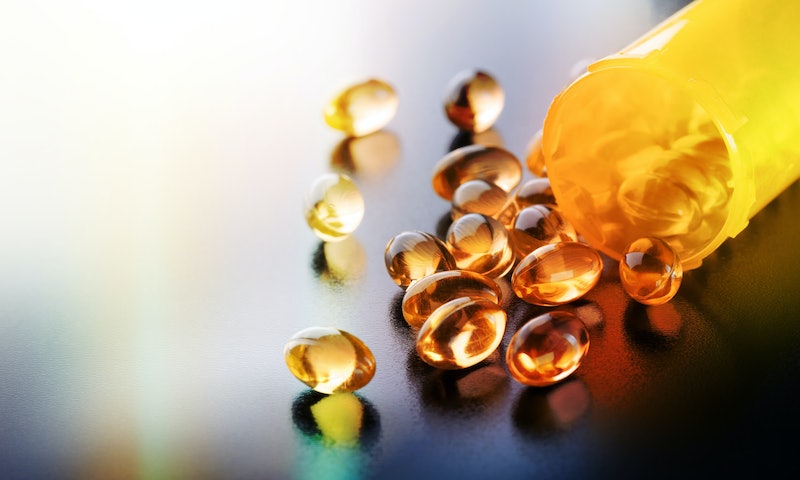 Just Google “benefits of CBD” once, and you’ll start to wonder if the compound can cure everything. You’ll find testimonials from people who claim taking the non-psychoactive cannabis compound helped them with arthritis and even cancer. But is CBD scientifically proven to work? The research is promising so far, but there isn’t sufficient evidence to back up all of the claims you may hear about CBD’s health benefits.

Research has shown that CBD may reduce seizures in children with Dravet syndrome and Lennox-Gastaut syndrome, which are both forms of childhood epilepsy. Last June, the U.S. Food & Drug Administration (FDA) approved its first-ever cannabis drug to treat these two conditions. However, CBD’s effectiveness in treating other health issues remains unknown, Dr. J. H. Atkinson, MD, co-director of the Center for Medicinal Cannabis Research at the University of California, San Diego, says. Atkinson tells Bustle that while there’s a lot of interest in the possible therapeutic benefits of CBD, “there is very little evidence of efficacy” right now.

“Some studies show CBD has antipsychotic effects in people with schizophrenia, but others show no benefits,” he adds as an example.

Dr. Alex Capano, PhD, the chief science officer at CBD company Ananda Hemp who has a doctoral degree in cannabinoid science, tells Bustle that while it takes a lot of evidence for scientists to “prove” something, the research into the effects of CBD is encouraging so far. Ahead, Atkinson and Capano evaluate some of the most common claims you may have heard from marketers and businesses about CBD. Here’s what they think.

The Claim: CBD Will Help You Sleep

One of the potential side effects of CBD is sleepiness. In a study published in the journal Medicines, researchers from the University of New Mexico tested 409 people over a two-year period and found that CBD can help with insomnia symptoms and may be more effective than the psychoactive cannabis compound tetrahydrocannabinol (THC) when it comes to helping people fall asleep.

But will CBD help you stay asleep? Atkinson says there is “some evidence that CBD may help with certain types of insomnia, but the result may be too much sleepiness the next day.”

The Claim: CBD Helps Your Anxiety

People with anxiety are sometimes given benzodiazepines like Xanax, Klonopin, and Valium. These are drugs that have been proven to treat anxiety, but also come with a long list of side effects, including dangerous interactions with alcohol and the potential for withdrawal. So, some people have turned to cannabis to manage their symptoms.

One of the most prominent claims about CBD is its potential to reduce anxiety. Capano says that so far, only one clinical trial of 24 people published in the journal Neuropsychopharmacology has looked at the effect of CBD on humans with social anxiety, and found that it was effective. Other studies have found mood improvement in patients taking CBD.

“One of the mechanisms through which CBD can improve mood is by increasing anandamide, our endogenous cannabinoid that makes us feel blissful,” she says. Anandamine is a neurotransmitter that binds to THC receptors in the brain. “It’s literally named after the Sanskrit word for bliss.”

A 2018 Frontiers in Neuroscience review of several studies also stated that CBD may help in treating post-traumatic stress disorder, but more research is needed before we’ll know whether it actually works for those managing PTSD.

If you’ve ever gone overboard at the gym or been in a minor car accident, you know how much it sucks to wake up in pain the next day. Cannabis companies claim CBD lotions can help soothe sore muscles and aching joints. Does it work, though?

Researchers from the University of Kentucky found that rats with arthritis benefit from CBD when it’s applied topically. According to the Foundation for Biomedical Research, scientists typically test on mice and rats because they’re similar to humans genetically and behaviorally. The findings mean that CBD has potential for helping humans with joint pain, but it should be noted that this research is still in its early stages.

Atkinson says researchers at the Center for Medicinal Cannabis Research are also conducting studies on how CBD affects people with autism, schizophrenia, and other conditions. “I wish there were more to say,” he tells Bustle. “Let’s hope the picture becomes clearer with more research.”

So, the bottom line here is that research on the health benefits of CBD just isn’t conclusive yet. In fact, the FDA regularly sends warning letters to companies that make incorrect health claims about CBD. There’s some encouraging research about the compound and its potential benefits, but most experts are wary of saying that it’s scientifically proven to do a lot of what people claim it does.