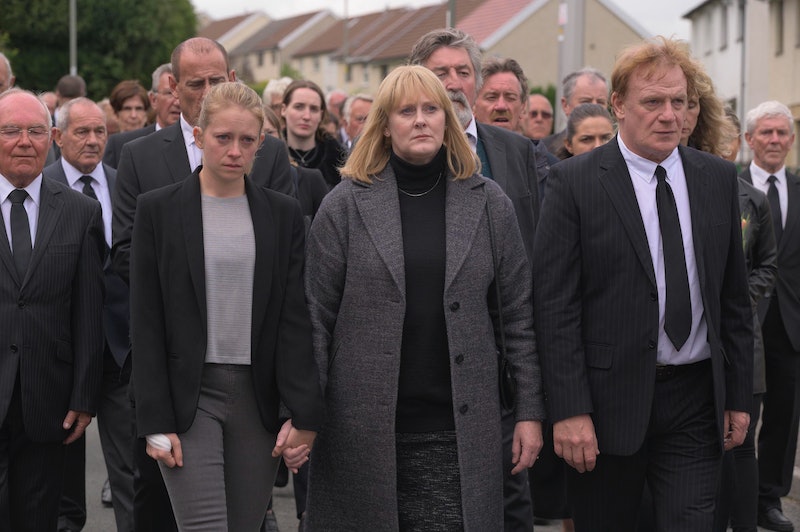 Set in a "left behind" town in Britain dealing with the aftermath of a horrific accident that changes the lives of countless residents, Channel 4's new drama The Accident sadly sounds like an all too familiar tale. But is The Accident based on a true story? Well, despite the narrative being based on a very believable incident, the show isn't in fact based on truth.

Writer Jack Thorne explained in an interview with Channel 4 that, when he wrote the script, he spent an enormous amount of time finding out about accidents that had happened in real life. All with the aim of making the incident in the story as believable as possible. "We spent a long time researching everything and constructing an accident that felt real which enabled our drama to do everything it needed to do," the writer said.

Thorne went on to mention the 2017 Grenfell fire and the 1966 collapse of a colliery spoil tip in Aberfan as two real-life incidents they focused on.

When asked why this was a particular area of interest, Thorne explained: "I was horrified as I think the whole country was that Grenfell happened in a country as developed and seemingly as rich as ours." He went on to speak specifically about the building's construction:

"I then grew progressively more horrified when the cladding wasn’t immediately removed from all the flats and when you read stories about either the residents themselves not being rehoused or other residents being stuck at the top of a tower block absolutely terrified every night because they had the cladding and they didn’t have the money to remove it and we’re still not removing that cladding."

The Accident sees the fictional Welsh town of Glyngolau reeling after several lives are lost after a night of teenage mischief turns to tragedy. When a group of young people break into a building site, they had no idea that a deadly explosion was about to take place. As the town mourns and comes to grips with what has happened, questions are asked. What happened, how did it happen, and who is responsible?

Thorne explained to Channel 4 the two reasons he decided to set the story in Wales. One is because he loves "Welsh culture" and "Welsh actors" and he "thought it was an opportunity to get them in the show." Speaking about the second, he said:

"I’m half Welsh ... so I’ve spend a lot of my life in and around Wales. Those valley towns have been decimated by the industrial changes we have had in the last 30 years and there is no industry left. So I tried to think of an area where investment would be encouraged to a degree that would allow us to tell the story that we wanted to tell. There are of course lots of areas in the UK that could of worked for that but Wales felt somehow right and those valley towns are a) so beautiful and b) so economically deprived I thought it would be an interesting theme to explore."

More like this
ITV's 'Maternal' Was Inspired By A Very Simple – & Unanswerable – Question
By Maxine Harrison
'Boiling Point's TV Sequel Is Set To Deliver A “Rollercoaster Of Emotions”
By Catharina Cheung and Sophie McEvoy
Rupert Grint Just Shared A *Major* Update About Ron Weasley’s Future
By El Hunt
The Banned 'Friends' Ad Shows Monica As You’ve Never Seen Her Before
By Sam Ramsden
Get The Very Best Of Bustle/UK
Sign up for Bustle UK's twice-weekly newsletter, featuring the latest must-watch TV, moving personal stories, and expert advice on the hottest viral buys.