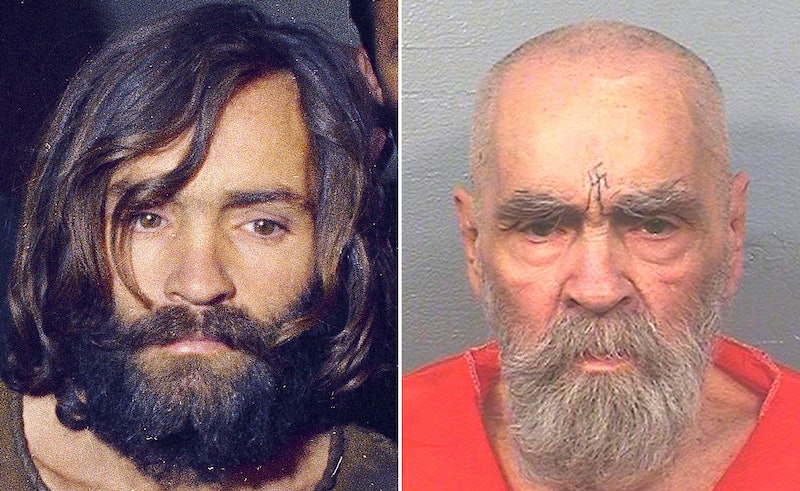 The history of the Manson Family has always been at the forefront of the true crime genre, and as next year marks the 50th anniversary of the Tate-LaBianca murders, it's no surprise that interest surrounding the cult and their violent infamy is beginning to peak again. Although, for those that are unfamiliar with the crimes committed by the group under the duress of their leader, you may be wondering, is Charles Manson still alive?

Well, the answer is no. Manson died last November at the age of 83 at California State Prison, Corcoran, after serving 46 years of his life sentence. Whilst it wasn't Manson but a group of his followers that carried out the largest spate of murders — which resulted in actress Sharon Tate and four of her friends losing their lives — they were under his direction. They were later accompanied by him the following night to murder Leno and Rosemary LaBianca at their home.

Manson and the members of his family that were involved — Susan Atkins, Linda Kasabian, Patricia Krenwinkel and Charles Watson — were initially sentenced to death, as reported by The Sun, but when the "death penalty was abolished in California in 1972," their death penalties were subsequently changed to life sentences.

In a new ITV documentary, called Manson: The Lost Tapes, the story of the Manson Family and the 1969 murders they committed are going to be explored in depth. The film will uncover more information about the inner-workings of the cult and their time before, during, and after the murders.

In a press release sent to Bustle UK, the doc is described as a series that "brings to life Charles Manson's world and how he assembled a group of young followers in a community."

The documentary-makers had "exclusive access to 100 hours of original footage [which] will include unseen and rarely-viewed interviews [that] will reveal the terrifying truth of life inside the Manson family." This "unseen footage" dates back to filmmaker Robert Hendrickson, "who had been given exclusive access to the Manson cult 50 years ago." Hendrickson released his own documentary on the Manson commune in 1973, but it was "banned by a judge shortly afterwards."

Now 44 years later, producer Simon Andreae managed to trace Hendrickson's footage via a private investigator, which is being shown for the first time "with new interviews with Manson cult members and experts to present the inside story of how an apparently peace-loving commune was turned into America's most horrifying group of cold-blooded killers."

Whilst Manson: The Lost Tapes is an exclusive part of ITV's current Crime & Punishment season, the production company that unearthed the tapes — Naked Television — has also made an American counterpart for Fox, titled Inside the Manson Cult: The Lost Tapes.

To make sure these weren't just two different airings for the same series, I contacted a spokesperson for ITV who tells me that whilst the "Fox and ITV versions are different...they use some of the same footage...but are both made by Naked."

So basically, you'll have two equally insightful — and disturbing — documentaries to put on your watchlist this autumn. I promise you now, you'll never see the deserts of California — or listen to the Beatles — in the same way again.