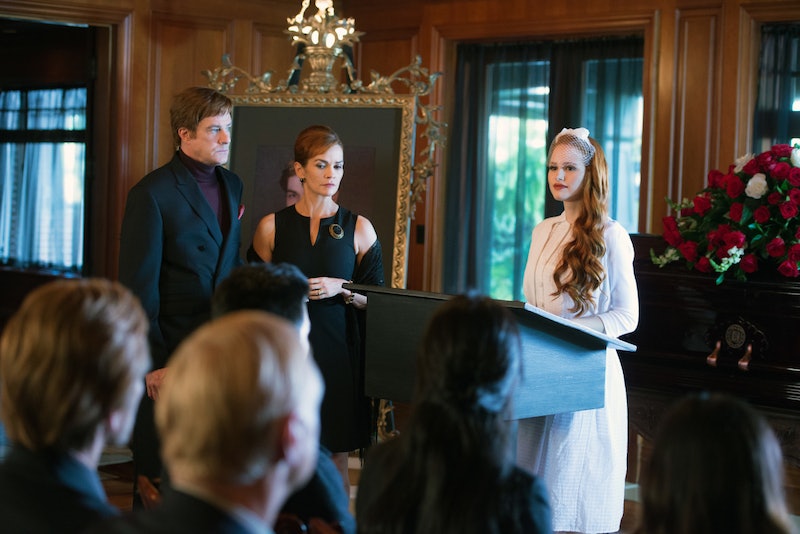 Just when it seemed that the citizens of Riverdale would be able to sleep soundly without fear of a serial killer roaming around, the Black Hood came bursting back onto the Riverdale scene. Betty spent the last episode trying to discern if her own father was the Black Hood — but there's another person of Blossom blood that she should be looking into as well. He hasn't been present for many episodes, but it's time to consider the possibility that Cheryl's uncle is the Black Hood on Riverdale.

Claudius' arrival to the series was nothing but bad news. The revelation that Cliff Blossom had a secret twin brother was a shock to the Blossom family structure, and has made Cheryl an even more unwelcome guest in her own family. Claudius has clearly been wreaking havoc on Cheryl's life, taking up with her mother and sending her to the Sisters of Quiet Mercy for conversion therapy, but is that havoc extended to the whole of Riverdale? Claudius' first full appearance on Riverdale came about in the latter half of the second season, but that doesn't mean that he hasn't been showing up since the beginning of the season under the mask of the Black Hood, picking off Riverdale citizens one by one all season long.

Claudius' ultimate goal seems to be seizing control of the Blossom Maple Farms and obtain control of the Blossom family business that he believes is rightfully his. It's a Shakespearean plot worthy of his own — Claudius shares a name with a character from Hamlet and shares a great deal in common with the classic villain. Claudius Blossom, like Shakespeare's Claudius, started a relationship with his sister-in-law following the death of their brother in an attempt to rule over their late brother's empire. While Cheryl hasn't gone full Hamlet and started ranting about the nature of life and death, a comparison between the two Claudius serves as pretty definitive proof that Claudius Blossom is undeniably a bad dude who has it out for Cheryl.

This may explain why Cheryl finds herself face-to-face with The Black Hood at the end of "Chapter Thirty-Three: Shadow of a Doubt." Since the return of the Black Hood, the killer seems to be especially fixated on Cheryl. There were several Black Hood-signed letters threatening to have Cheryl removed from the lead role, only for Midge to get the role of Carrie and be murdered. In those moments, the motives of The Black Hood line up with Claudius', but that doesn't explain the rest of The Black Hood's actions.

The Black Hood's obsession with Betty Cooper could be explained away by the fact that Betty is technically part of the Blossom family tree — but why would he have shot Fred Andrews? What reason would Claudius Blossom have to kill Ms. Grundy? Does Claudius Blossom hate Jingle Jangle so much that he riddled Moose with bullets? His motives, or at least what we know of them, don't quite add up enough for Claudius to be the Black Hood, but they do line up enough for him to be a Black Hood. It's possible that Claudius is just one of many men who are adapting the Black Hood to perform anonymous crimes in Riverdale.

More like this
An Ultimate Guide To The Music Of 'Rap Sh!t'
By Brad Witter
The 'House Of The Dragon' Showrunners Revealed One Key Similarity With 'GoT'
By Grace Wehniainen and Kadin Burnett
Does The 'Echoes' Ending Mean There Will Be A Season 2?
By Kadin Burnett
Here’s How 'House Of The Dragon' Diverges From The Book’s Timeline
By Allyson Johnson
Get Even More From Bustle — Sign Up For The Newsletter