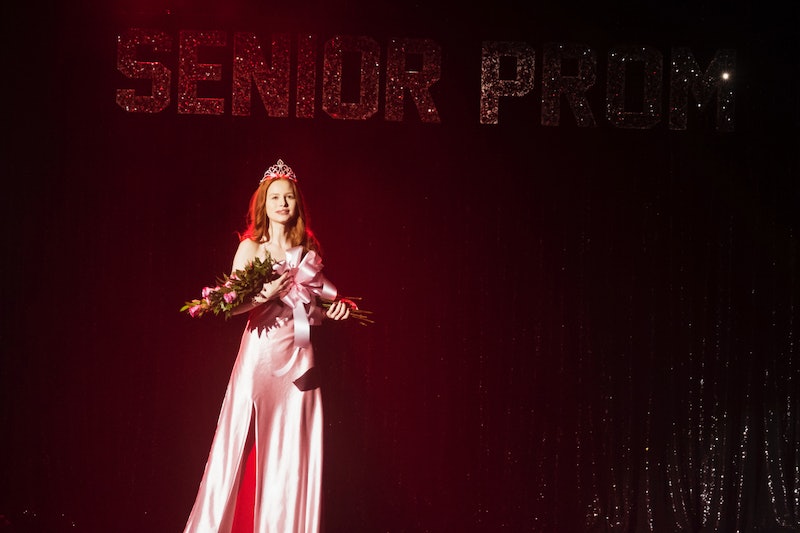 If you thought the Riverdale musical was going to have a happy ending, you haven't been paying attention. After treading water for a few weeks, the seemingly idyllic town is drenched with a new horrifying teenage murder. Who is the new Black Hood on Riverdale? Midge may be dead at the hands of a new... or old... foe.

In a move that Jughead correctly identifies as "a classic Phantom of the Opera tactic," the alleged killer sends far too many notes throughtout the episode written in magazine ransom letters demanding that the titular role be recast. How fitting is it that Jughead's musical theater touchstone is the one about a tortured genius serial killer? Anyway, the notes requested that Ethel Muggs be the Christine Daaé in this Phantom situation and go on as Carrie in Cheryl's stead.

Which is... confusing. Like, this is totally taking the "save Barb" campaign from Stranger Things over the line, right? Why is this Black Hood so obsessed with Ethel? Doesn't the killer know that Shannon Purser is playing Anna in Spring Awakening over on NBC's Rise? She's doing fine.

Based on the fact that Midge ends up dead while Cheryl sits makes it seem like the Blossom heiress wasn't the real target. Was this ever about Ethel to begin with?

"I am back from the dead," reads the final note, written in blood red. "All those who escaped before will die. — B.H." Those initials, by the way, were the perfect final touch to complete this Phantom homage. So, Midge was attacked once before by the "original" Black Hood and survived.

Here's who the new killer could be.

Jughead and Betty initially suspect Ethel and confront her, in which she seems to admit knowing about the threat despite Betty's overly leading interrogation techniques. Doth she then protest too much when Jughead finds the magazine clippings in her trashcan?

Maybe it was Ethel. She's had moments of darkness before after being harassed by Chuck. She wanted Veronica to pay for what the Lodges had done to the town and, like the Black Hood, believed in spreading the nastier truths about the town. Still — murdering Midge is a little extreme.

Suspicious so-called brothers who are suspiciously backstage before the show are, you guessed it, suspicious. He also has killed before.

Jughead caught the assistant director giving Midge some "last minute notes" in her dressing room. That totally just means they were making out, right? However, he's one of the last people to see her alive. Plus, Midge told Kevin that she heard Fangs was gay and tried to set them up. That's interesting, as Kevin and Midge's boyfriend Moose have surreptitiously hooked up once or twice. Is this just high school drama, or a clue?

Maybe poisoning grandmas grew tiresome for Cheryl's uncle, and he took his aggression elsewhere. He could have been using it as a way to get rid of his niece, or at least prevent her from doing the show. Still, unless he was also the Black Hood all along, none of this explains why Midge Klump was the ultimate victim.

One of the old fan theory favorites is BACK ON THE TABLE, y'all. While it makes a modicum of sense for the director's dad to be in the dressing rooms ten minutes before "places," that also places him at the scene of the crime.

Kevin reminds the audience at the very beginning of his confessional with Jughead that his dad was the one who shot the Black Hood. Could that be a clue that the janitor was a red herring?

It could be almost anyone. Much of Riverdale was present at the musical, either on stage or in the audience. Moose was also acting aggressive towards Jughead before the show, but if he killed his right hand gal Midge, that would be beyond tragic.

Whoever killed Midge, be it a new person acting as the Black Hood or the real killer all along, everyone in town should watch out. More people escaped his wrath than actually died the first time around. He wasn't really that good of a serial murderer. Maybe this time, however, Riverdale won't be so lucky.