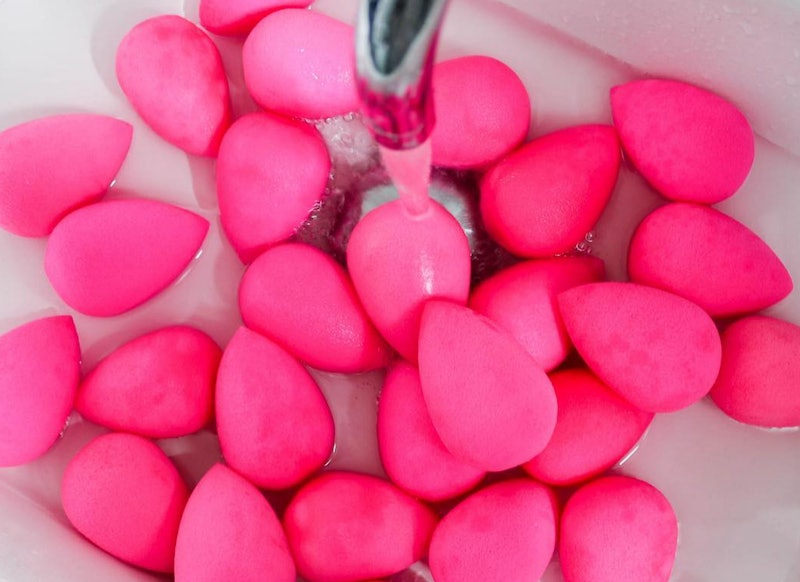 Beautyblenders are the best! The squishy, egg-shaped, and aqua-activated sponges, which come in every color from hot pink to black to lime green to millennial pink, are designed to be dampened when applying makeup. Users are always coming up with clever ways to clean their beloved beautyblenders. Like the beautyblender x microwave cleaning hack, which is gaining momentum again!

The microwave hack popped up on Reddit as far back as 2014. It's certainly effective, as demonstrated by the Internet. But is it safe?

If you take the proper precautions and submerge your beautyblender in soapy liquid, it appears so. If not, you could get an entirely different result.

Beautyblenders are so genius since the tool doesn't absorb or waste too much of your precious and sometimes pricy product. The teardrop shape also allows you to disperse, buff, and blend cream products in hard to reach spots. You basically wet, squeeze, and bounce the latex-free sponge.

But beautyblenders do get awfully stained from daily use because duh! Of course you should always endeavor to keep your makeup tools clean for all of the obvious hygienic reasons — since they can be a breeding ground for bacteria.

You also want to clean your beautyblender because you don't want previously used foundation or bronzer colors to mix with new ones or you might end up with a makeup mess.

In order to keep your beautyblender clean, bright, and looking new, you can use the brand-sanctioned cleanser. Or you can nuke it in the microwave.

A Twitter user microwaved her beautyblender for a hot minute — literally — and the results were "Wow!"-inducing. And thus this hack is going viral again.

The user who goes by the @Jaycoko_ handle was totally surprised at how her blenders came out of the microwave looking brand spanking new. She posted a video, showing the before and after. She revealed in tweeted replies to makeupistas asking questions about her methodology that her sponges were extra brown and glittery because she spilled product in her makeup bag. That's all of us!

But the main takeaway here is that the sponges are pretty much back to their original colors after nuking them. All you have to do is mix soap and water in a cup, drop the beautyblender in the cup, microwave it for a minute, and you're done! You may have to rinse and repeat, depending on how stained the blenders are. But you should also use discretion so not to ruin the sponge or your mic.

@Jaycoko_ also noted in the thread that if you want to dry the newly-clean beautyblender, put it back in a cup in the microwave, sans any liquid. She didn't specify how long to put it back in. So if you plan to do so, proceed with caution and try 10 second intervals to be safe.

Ultimately, you don't want to end up with a melted beautyblender. This user didn't put hers in a cup of soap and water and this happened. Always use a cup and allow it to cool, since you don't want to burn your fingers. You also want to be careful not to start a fire in your appliance.

There was also a mention of microwave rays. But we use microwaves to cook food, which goes into our bodies.

@Jaycoko_ also stated she used "washing up" liquid, which other users clarified is laundry detergent.

It's worth nothing that WebMD reported back in 2007 that microwaving kitchen sponges disinfects them and actually helps kill bacteria.So you are also disinfecting your makeup sponges and thus helping your skin with this hack!

Another user put the microwave hack to the test with a variety of blenders to mixed results.

When doing this hack, you want to make sure your beautyblender doesn't get too hot, always protect it by placing it in a cup, and don't use it on your skin until it cools down. Perhaps this hack will inspire you to clean your tools more often.