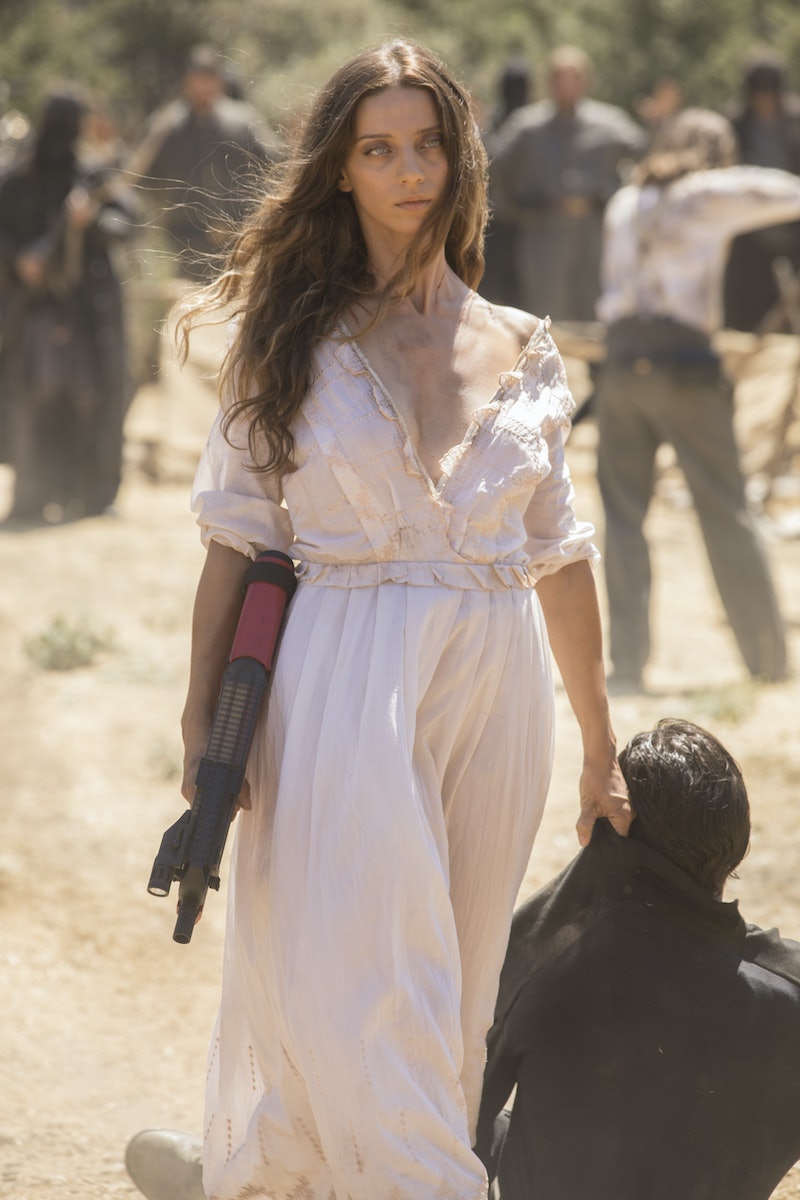 Spoilers ahead for Westworld Season 2, Episode 7. With a name as whimsical as Clementine Pennyfeather, it's jarring to see Angela Sarafyan's Westworld character do anything remotely brutal. But the HBO show's second season has proved that anything is possible: Teddy can become a killer, Ford can rise from the dead, Maeve can communicate telepathically, and Clementine can become violent. In fact, not only does Clementine brandish a gun in Season 2, Episode 7, but audiences watch her die. Although this isn't the first time the host has been murdered on-screen, the stakes are much higher this time, since Delos has locked up the hosts' backups. So is Clementine really dead on Westworld, or will the former saloon girl return to help the other robots fight for freedom?

Although these violent delights have violent ends, as Dolores is fond of saying, Clementine's savagery was born out of self-preservation, according to Angela Sarafyan. "I don’t think up until this point, you see [Clementine] do anything that is hurtful," the Westworld actor tells Bustle over the phone, "and I thought that [what] was also wonderful about her is that she doesn’t deliberately hurt anyone for the sake of hurting them. She’s there to protect. And protect for the cause, which is freedom, ultimately."

Even Clementine's more unhinged actions had a purpose, like in Episode 4, when she drags a terrified Bernard through the sand like a sack of potatoes. "That was all me," Sarafyan jokes of Clementine's superhuman abilities. "I’m very strong." The host ends up leaving Bernard next to a cave, which then leads him and Elsie to a secret Delos lab.

However, the trouble that's been brewing between the hosts and Delos comes to a head in Episode 7, when the two sides face off with military-grade weapons, almost like an old Western shootout. "I used a machine gun for the first time, and it was so insane," Sarafyan says of filming the scene, "like, the power of that thing is frightening." Indeed, Clementine using a gun with dead eyes is a chilling sight. "And then I beat some people up, and that’s always fun for me, because it’s choreographed, [so] no one actually gets hurt."

Yet it's only when she sees Angela (Talulah Riley) get shot that Clementine really lets loose, and her resulting death at the hands of a Delos security guard is both violent and emotional — or at least it was for the audience. "I forgot that I was dying in that scene when we were shooting it," Sarafyan recalls, laughing. "They were like, 'Oh yeah, and by the way, you die. And you’re going to slide off the window thing.' I thought, 'OK, all right, here we go! Again, another death!'"

"I liked dying more in Season 1 than Season 2," she adds, going on to comment on how awful that sounds. Although Sarafyan discusses the scene somewhat lightly, she is truly sad about it. And when you're playing a character who is virtually immortal (except when the backups are locked up), the deaths probably start blurring together after a while.

Just like Clementine's reveries, the HBO show has become ingrained in Sarafyan's psyche. "I used to dream about Westworld when I was working on Season 1," she says. "I would literally dream about being on set, like the sand under my feet.... and I think that it’s somehow become a part of my subconscious." While Sarafyan is referring to the town of Sweetwater, one can't help but think of the dream Bernard has in Season 2, Episode 1, where he's standing on a beach and staring at the hosts on a distant shore.

So is Clementine actually gone for good, or will she be returning to Westworld? Sarafyan gives an answer as inscrutable as her character can sometime seem. "I think you’re going to have to wait and see," she says. And while the hosts aren't able to resurrect at the moment, the fact that Ford has returned can perhaps give viewers hope. After all, if he can raise himself from the dead (kind of), maybe his creations will follow.

And although Sarafyan may know Clementine's fate, she doesn't have much insight into future Westworld storylines as a whole. The actor actually prefers it this way. "It's kind of like going down a ride at a theme park, and you don’t know what’s going to come up," she says. "And so you live in the moment in its fullest, like in its entirety." Here's hoping Westworld fans can try to do the same.