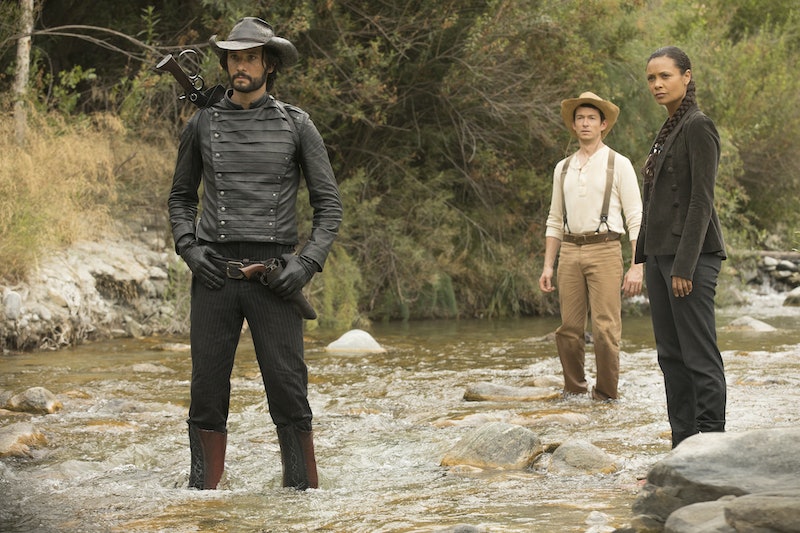 Major spoilers ahead for the "Les Écorchés" episode of Westworld. That probably wasn't the family reunion Maeve was hoping for… Astute fans must have known better than to hope for an easy happy ending for the awakened host and her beloved daughter. But their reunion went worse than anybody could have imagined. Will Maeve die on Westworld? Fans do have reason to fear for her.

Maeve's happy reunion with her daughter went badly quickly last week, when she first realized that the little host she loved so much had a new robot mommy — and then when the Ghost Nation attacked the homestead, as they repeatedly did in Maeve's traumatic flashbacks. While his captor/ally was busy fending off the mounted invaders, Lee Sizemore seized the opportunity to use his pilfered walkie talkie to call in the cavalry.

In Episode 7, "Les Écorchés," things go from bad to much, much worse very quickly. But initially, it seems like things might actually work out for Maeve. After seeking shelter in a nearby village, she comes face-to-face with a figure from her worst nightmares: William, who, in a past life, had stabbed her and then gunned down her daughter, reveling in their pain and grief just for the sake of exploring his own darker nature.

Of course, Maeve is no longer afraid to stand up for herself and fight for her survival — or get some well-earned revenge. Using the mesh network, she commands all of William's host companions to shoot at the villainous man in black; even Lawrence, who is initially resistant to Maeve's control, eventually turns on his companion after he remembers William murdering his wife in a past life. In a brutal sequence, William suffers no fewer than four gunshots: one in each arm, one in a leg, and one in his gut.

But he isn't the sequence's only victim. In a swift reversal of fortune, the cavalry that Lee calls quickly swoops in and takes control of the situation, gunning down Lawrence — and Maeve. She can only watch, helpless, as Ghost Nation arrives and scoops up her daughter, carrying her off into the wilderness. Then a grievously wounded Maeve is loaded into the QA truck and carted back to the Mesa.

The next time she shows up is towards the end of the episode, after Dolores storms the Mesa and bombs the Cradle, destroying all of the host backups, effectively rendering all of them mortal… and therefore more human in her eyes. On her way out of the facility, Dolores spots a wounded Maeve on a stretcher. (Sizemore is hiding nearby.) After offering to put her out of her misery — which Maeve of course declined, still determined to keep her promise to find and take care of her daughter — the two women part ways once more. But Maeve's future remains unclear.

With the backups gone, Maeve's current consciousness is now her only one. If the pearl inside her head were to be destroyed, that would be curtains forever for Maeve. Fortunately, being a host, she still can't die unless her pearl is destroyed — bullet wounds aren't fatal for a host like they would be for a human. So while Maeve be damaged and a bit out of commission for a while, she's not in imminent danger of kicking the bucket. The only question is how or if she'll get healed enough to get out there and back in action.

Of course, with Sizemore cowering in fear nearby, hopefully he will be able to get her the help she needs now that Dolores' posse has rolled out to the Valley Beyond. Things have rarely been worse for Maeve… but underestimate the plucky former madam at your own peril. She has defied the odds so far, and will probably continue to do so until her heart stops beating — or until her pearl stops computing, to be more accurate.