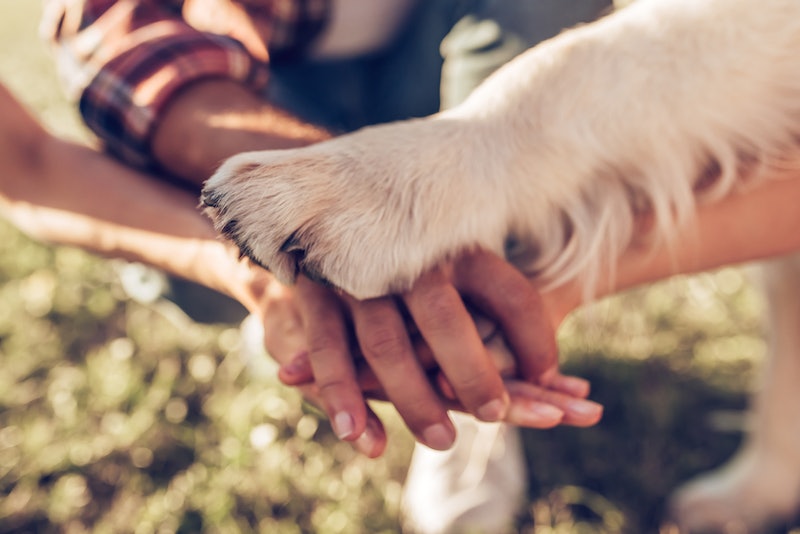 Do you stare longingly at dogs on public transport? Or do you scroll through local shelter websites dying to give a dog a furever home? Well guys, you are not alone, lots of us want a dog. However, for many people, the cost and time needed to care for a dog is too much to fathom. So for some, the idea of co-parenting with a partner, a family member, or a friend may seem appealing. But is co-parenting bad for a dog?

I spoke to dog behavioural expert Sharon Jennings, of The Office Dog, who had a lot to say on the matter, and, TBH, guys there are a heck of a lot of mitigating factors to be considered. Jennings said:

"Some dogs might find this very stressful if they're being shipped back and forth every few days (and you need to take into account the length and method of travel as well), others may take it completely in their stride."

However, Jennings pointed out that there are some measures you can undertake to help the dog adjust, and one of the most important is time and patience.

"You can try and make it easier with things like Pet Remedy plug-ins, bandanas etc., and if the dog is getting stressed out by it all, then you can try longer periods of time at each location, two weeks to a month for example."

Well guys, Jennings' concerns are shared by a lot of wannabe dog owners according to some research done by the team over at Legal & General. Not so surprisingly, of the 1,000 people surveyed, one in four people say that they would absolutely consider co-parenting a dog. However, the results also showed that a lot of people would be quite concerned about the welfare of the dog if they chose to share it.

One in three people believe that co-parenting would have a negative effect on the dog, and and three in five say multiple homes would unsettle a dog. On top of that, one in two have concerns that their differing owner skills would be confusing for a dog. But you know what one of the biggest concerns was? And one that we can all understand? It's ye olde falling out. Yes, 36% worry what would happen to the dog if they fell out.

Jennings points out that the potential of having a fall out is perhaps the most important thing of all to be considered before co-parenting a dog:

"I would say if you're going to try this, you need to have an agreement from the start between the humans that you will put the needs and well-being of the dog first. Maybe even in writing, and come up with possible solutions to a number of potential issues from the start, before emotions become involved."

So, as with anything surrounding dog adoption, when it comes to co-parenting, the dog's needs should be number one on your list of priorities. In order to create a successful co-parenting situation, you need honest and open communication between the two humans, a shed load of patience, and space in your life and your living space to accommodate the things your animal needs.

More like this
Mimi Webb’s IRL Situationship Inspired “Red Flags”
By Catharina Cheung
4 Surprising Celeb Throuples That Got The Internet Talking
By Sophie McEvoy
Forestcore Is About To Take Over Your TikTok FYP
By Sam Ramsden
Pret & Costa’s Coffee Is The Strongest On The High Street, According To Which?
By Sam Ramsden
Get The Very Best Of Bustle/UK
Sign up for Bustle UK's twice-weekly newsletter, featuring the latest must-watch TV, moving personal stories, and expert advice on the hottest viral buys.