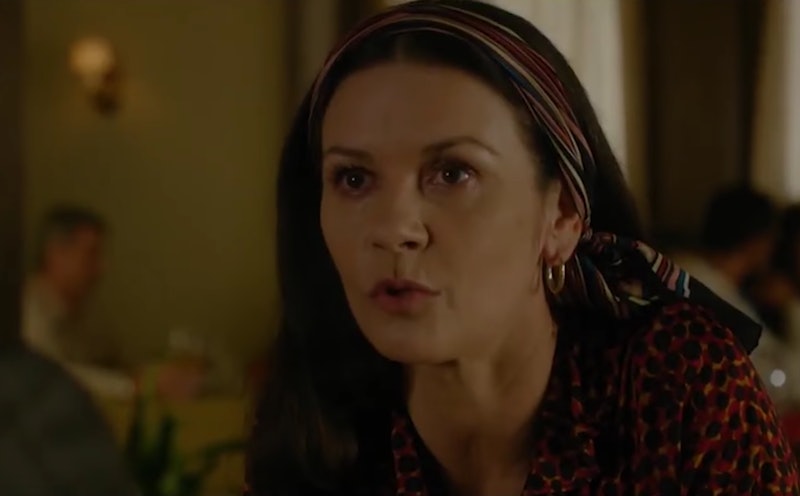 A new movie called Cocaine Godmother may sound like it could be Quentin Tarantino's dark take on Cinderella, but in fact, it's actually a new Lifetime made-for-TV film. The movie, which premieres on Jan. 20, stars Catherine Zeta-Jones as a woman named Griselda Blanco and as it turns out, Cocaine Godmother is based on a true story. The Lifetime movie chronicles the wild life of a powerful figure in the Cocaine Wars, and you're not gonna want to miss a moment.

Blanco, who also boasts the nicknames La Madrina and the Black Widow, was born in Columbia during the country's civil war, according to Vice. She moved to Queens, New York City, with her husband, who became the first of three to reportedly fall victim to his wife's murderous ways (hence the nickname, Black Widow). Her husbands weren't the only alleged homicide victims of Griselda Blanco, though; she was convicted of three murder charges, although authorities estimated that throughout her life, Blanco allegedly ordered the murder of over 200 people, as stated by the Lifetime Movie's description.

After moving to Miami and then Colombia, Blanco secured herself as one of the most powerful drug kingpins. According to Vice, "Police say she is single-handedly to blame for Miami devolving into the homicide capital of America in the 1980s." That's not her only claim to fame, though, as Blanco is also credited with creating false-bottom suitcases used to smuggle cocaine from Colombia to the U.S., and she is believed to have developed the motorcycle-assassin technique popularized in Colombia and then Miami.

Despite her important role in the highly criminalized drug trade, Blanco died in 2012 in Colombia as a free woman. Though, as Zeta-Jones says as Blanco in the movie's trailer, she felt she was "in prison since the day [she] was born." While Pablo Escobar's role in the Columbian drug cartel has been chronicled many times in film and TV, from 2001's Blow to Netflix's Narcos, Blanco's story has not received nearly as much attention. Until recently, that is. According to W Magazine, three different film projects about the female drug lord were in the works as of May 2017. The choice to have Zeta-Jones, who is of Welsh descent, initially sparked controversy, understandably.

The other projects, more appropriately, include Latinx actors set for the role. In one, Jennifer Lopez will most likely portray Blanco for HBO, and in the other biopic, called The Godmother, Catalina Sandino Moreno will take on the role of Blanco.

Despite the controversy over Zeta-Jones' casting, the actor is enthusiastic about her role as Blanco. In an interview with Deadline, the Oscar winner revealed that her role in the Lifetime film reignited her love for acting. "It’s made me remember why, when I was nine years old, I left home to go and do theater in London," Zeta-Jones said. "That feeling of joy, and feeling that I’m home and this is what I love to do. I haven’t had that feeling in years."

Despite Blanco's reprehensible crimes, she makes for a fascinating tale of a woman who played a powerful role in a realm otherwise ruled by men. As Billy Corben wrote for Vice, the Cocaine Godmother used her femininity to her advantage, opening up a factory in Colombia which manufactured women's undergarments that included secret compartments to allow women to smuggle drugs.

Just as much as Escobar and El Chapo, Blanco offers fascinating material for biopics like Cocaine Godmother. It might not be exactly what you expect from Lifetime, but during the time when true crime rules entertainment, it will most likely prove a success. If you love Narcos, you won't want to miss this.