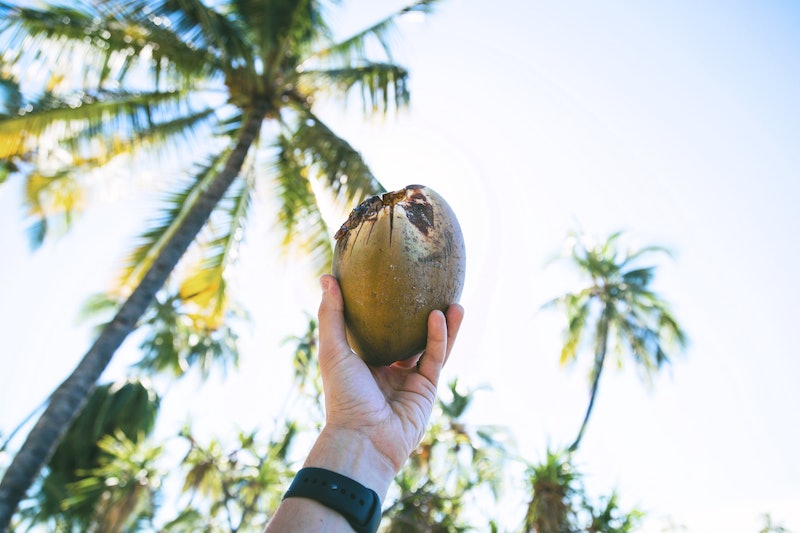 You know that friend who swears by coconut oil? We’ve all got one. I’m talking about the friend who keeps a giant vat of the stuff in the kitchen, closet, and bathroom, and who "takes" a bit whenever they’re feeling funky. You might want to call ‘em up and suggest they switch to vitamins, though, because the American Heart Association recently popped up with a gentle reminder that eating coconut oil might not be as good for us as we all think it is — specifically when it comes to cholesterol levels. But there is a flip side to the argument, as the mysterious plant oil does pack some lesser known benefits that make it still worth keeping around. So, as for whether coconut oil is good for you or not? Well, good news for beauty enthusiasts.

Excess amounts of coconut oil might not be good for your cholesterol, but coconut oil can do wonders for your beauty routine. Beauticians have long since touted the benefits of a regimen involving coconut oil, but some people have been slow to catch on to the miracle oil. While less is more when cooking with coconut oil, it turns out your skin, hair, and nails crave the rejuvenating power of coconut oil.

The next time you want to give your legs a rub-down, reach for the coconut oil instead of lotion. Coconut oil is super hydrating and slick, making it a proven elixir for preventing dryness and skin flakiness.

It Fights Off Diseases

It Restores And Repairs Hair

If you’re dealing with dried out, damaged hair, coconut oil can help. Coconut oil packs essential proteins needed to facilitate the hair re-growth process. If your hair’s feeling fried, coat your strands with coconut oil to bring them back to life.

It Makes Your Nails Stronger

Experts confirm that using coconut oil on nails and around the cuticle bed can seriously enhance the strength of the nail. The emollient quality keeps cuticles soft, its anti-fungal properties keep things clean, and the regular use of the oil can keep nails from going brittle.

Coconut oil is gentle on skin and tough on makeup build-up … aka, a winning combination if there ever was one. Use it to remove foundation, mascara, and eyeliner, then wash the face as usual.