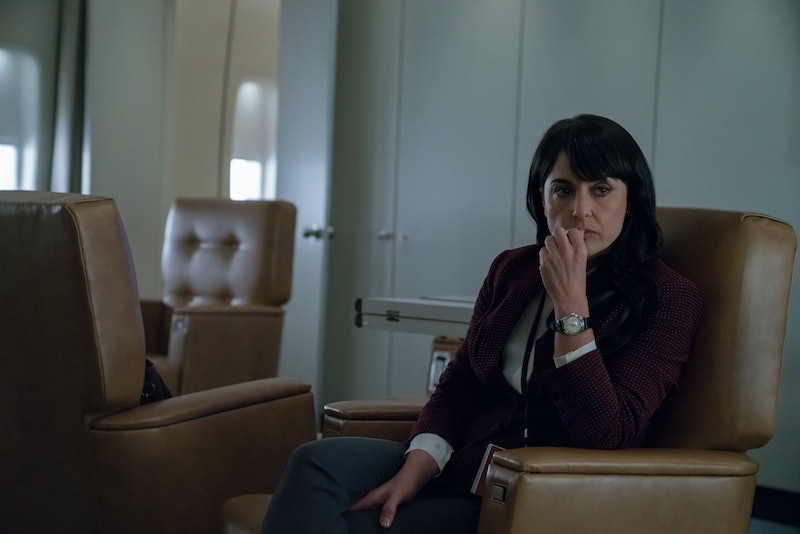 Spoilers for House Of Cards Season 6 Episodes 1-5 follow. After the death of fellow reporter Zoe Barnes in House Of Cards Season 2, Constance Zimmer's Janine Skorsky fled the nation's capital. But Janine returns in House Of Cards Season 6 and she's investigating a new story. A chemical spill at one of Shepherd Unlimited's subsidiaries, Arcas Refineries, in Ohio causes a state of emergency. While Governor Roger Olmstead and other higher-ups are trying to conceal the scale of the contamination, Janine gets information from an Arcas employee. And as she unearths the truth about this chemical skill, Janine might just find an unlikely ally in none other than President Claire Underwood.

Janine, Zoe, and Lucas Goodwin tried to uncover all of Frank Underwood's corruption in Season 1. But when Zoe got too close to Frank and he killed her, Janine decided to leave Washington, D.C., to save herself. While it might have been a cowardly move, it was certainly the safest move since Lucas ended up dead as well after he tried to assassinate Frank.

Janine appeared in Season 4 when Tom Hammerschmidt visited her hometown of Ithaca, New York, following Lucas' death. Janine and Tom are some of the only people who truly know how evil Frank Underwood was. And now that he's dead, she's out of hiding and doing the type of thorough journalistic work that's desperately needed.

While Duncan Shepherd's portion of Shepherd Unlimited has been buying up TV stations and big newspapers, like The Washington Herald, Janine works for a small weekly newspaper in Ithaca. This gives her the freedom to get to the actual truth of the spill at Arcas Refineries. (Although Duncan notes how simple it would be to acquire the paper.) Shepherd is trying to downplay what occurred, even though two people died and homes had to be evacuated. In a discussion with her Arcas source, Janine learns that Shepherd Unlimited could have stopped this disaster from happening. "It was gonna happen, cause it happened before. We complained all the way to the EPA, but whatever. Only this time the explosion was bad. And yeah, some guys died. And the company knew. They knew," he tells her.

The only other person who seems to be taking this spill as seriously as Janine is the president herself. Claire is fueled by not only stopping the Shepherds from controlling her White House, but by doing the right thing. She calls the governor of Ohio's bluff and heads to an evacuated area. The tap water in the town of Bellport apparently smells of rotten eggs and trash and when she tries to get the governor and other officials to drink it, they show their hand by refusing to do so.

The contaminated water and the governor's resistance to action mirror the real-life Flint water crisis where lead contamination impacted the city's water supply. A report from the University of Michigan stated that Michigan Governor Rick Snyder was partially to blame for the crisis. On House Of Cards, Janine is trying to find who to blame for the Arcas chemical spill — and her work could expose the Shepherds for what they really are.

The conglomerate that is Shepherd Unlimited is also using this human-made disaster as an opportunity to get people to sign up for its app. They use the app to mine data off people's cell phones and even track people's locations. Since Janine reported on the disaster and downloaded the app, Duncan and lackey Seth Grayson are having her tracked. Janine ditches her phone, but that doesn't mean she's off Shepherd's radar.

The Arcas chemical spill brings Janine back to D.C. where she's staying with her old boss Tom. And while she's in danger all over again because of her investigating, maybe an Underwood will actually help her this time. Because if the president recognizes that Janine can bring down the Shepherds, Claire may give Janine the protection and support she needs to finish her story.