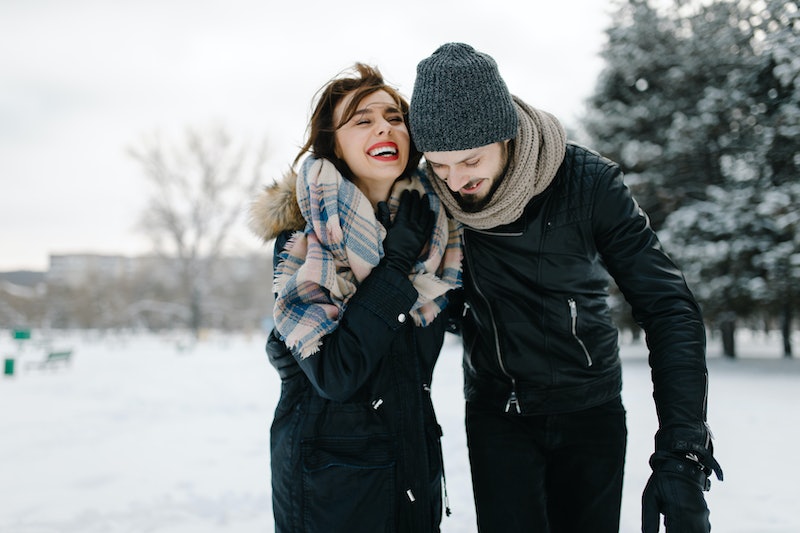 Regardless of whether you love it or hate it, believe in its existence or not, cuffing season takes place in the colder months. In fact, it's right around the corner, beginning on November 5. Introduced back in 2011 on Urban Dictionary, cuffing season is that time of the year when really single people get serious about finding someone to "cuff," cuddle, or just be with for (at the very least) the colder months of the year. If you don't really believe it's a thing, there is some legitimate science behind it.

"We slow down in the fall," Tristan Coopersmith, licensed psychotherapist and founder of Life Lab, tells Bustle. "Summer is a busy time. There's a feeling of wanting to get all the fun and freedom in. So by the time fall hits, we're all pretty spent and just want to (Netflix and) chill. Serial dating takes too much effort we just don't have post-summer."

That's because melatonin elevates in the brain due to the shorter days, Match’s chief scientific advisor, Dr. Helen Fisher tells Bustle. When melatonin is elevated, you're much more eager to lazily lounge around at home than go out and try to meet a bunch of people — but that's just one part of it.

Why You're More Likely To Want A Relationship During Cuffing Season

Why do you have the urge to find a partner at anytime of the year? It's all about your hormones. “We do know testosterone rises in November," Fisher tells Bustle. “No one really knows why testosterone, estrogen and other hormones ebb and flow. But certainly light and dark (and cold and hot) affect the mating habits of many other mammals. So perhaps humans have vestiges of these mammalian rhythms even if we don’t have a specific mating season.”

As Fisher says, the science behind the season really aligns with what Match sees in their user activity. Elevated hormones can "trigger even more desire to cuff," which is probably why online dating hits its peak season during winter.

"Research shows that [heterosexual] men are actually more attracted to women in colder months than in summer months," Coopersmith says. "It's a supply and demand thing, or rather an illusion of supply and demand." In the summer, more people are out. Therefore, it appears that the supply is high. But when winter hits, less people are out, so it appears that supply is low. "Since we're wired to mate, our primal instincts come out and lead us to be more open or serious about relationships."

A 2015 Hinge survey can even back that idea, too. According to the survey of 1,000 Hinge users, men were found to be 15 percent more likely to look for a relationship in the winter than any other season. Women were also five percent more likely to want something more committed or serious during the colder months.

"Hormones change with the season due to light and temperature," Coopersmith says. "Our sex hormones, which are responsible for libido are super charged. We are literally just hungrier for sex during this time of the year."

We're also a lot lazier — essentially cuffing season is all about finding that one person to satisfy our basic human need to mate during the lazier months of the year. It's definitely a much less romantic picture than cuddling up with someone in front of the fireplace when it's snowy and cold out. At the same time, however, that doesn't mean you can't find something genuine and romantic during this time.

There are the obvious things to do like update your dating profile or attend a bunch of fun local fall events. But as Megan Weks, Dating and Relationship Expert tells Bustle, "Pre-cuffing season is the ideal time to look inward."

So how do you do that? Reflect on past relationships. Ask yourself what you liked, what you didn't like, and why that person or relationship didn't suit you or your lifestyle. Then, think about what you want in a partner and in a relationship. "Now is the perfect time to determine what you want and go after it. Doing this consciously is the best way to proceed," Weks says. "You truly can get everything you want."

According to Match, the season officially begins on November 5, the Sunday right after Halloween. So if you're currently single and hoping for a successful cuffing season this year, there's still plenty of time to prepare.