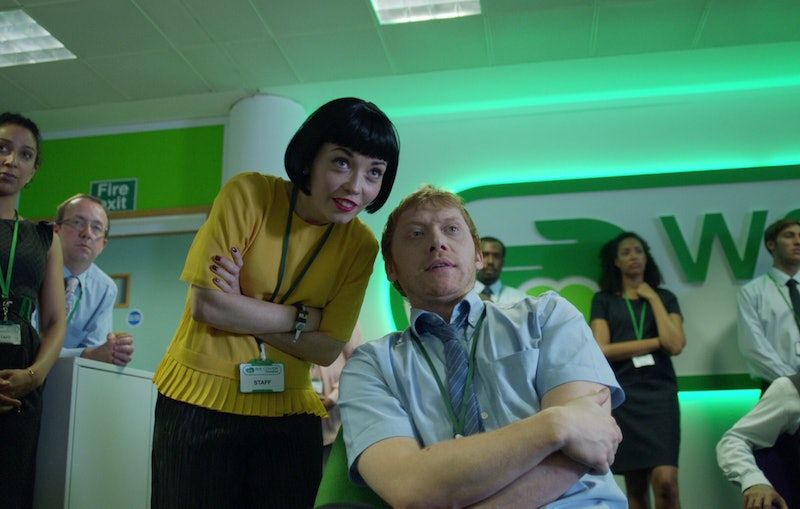 In Sick Note, Daniel Glass is a bit of a mess. Played by Harry Potter alum Rupert Grint, the character is a misguided and downtrodden deadbeat on the verge of losing his girlfriend and disappointing his family. Then, the unexpected happens — he’s diagnosed with cancer, and suddenly, people start treating him like a star. When it turns out Daniel is misdiagnosed, however, he decides to keep up with the charade. There’s no evidence to support the idea that Daniel Glass is based on a real person, but even so, Grint’s performance will have you glued to the screen as he tries to navigate whether or not he should come clean.

Throughout the British comedy, set to arrive on Netflix Nov. 23, Daniel chooses to stay quiet about the fact that he’s not actually dying, as he fears losing the people he loves and their renewed affection for him. You might feel like you could never root for a character who’s telling such a hurtful lie, but Grint has said it's something Daniel struggles with.

"When Daniel finds out that he’s not terminally ill, he has a big decision to make. It’s not easy for him [to lie]," Grint told Ireland’s Buzz. "He is aware that it’s a terrible, terrible thing to do, but he feels he has no choice because everything is going so much better. Now he’s got everything he wants. He thinks his hand has been forced." It’s clear that viewers are meant to empathize with Daniel, even if they don't necessarily endorse his actions.

Grint also knew going into this project that playing Daniel would be difficult at times — faking cancer is a bleak subject matter, even for dark comedies. But ultimately, he found himself connecting to it rather organically. "I had reservations about it because in the first drafts there were some jokes where we reacted like: 'Whoa,'" he told UK’s Sun. "But it’s very dark, which is what appealed to me. There’s quite a dark side to my sense of humor."

Despite the fact that he related to the humor, lying his butt off as Daniel wasn’t always a walk in the park for Grint. In fact, the act of lying itself really pushes his buttons, which made for a role that took him way out of his comfort zone. "It’s quite immersive, just being the character and being on set. It affected me more than anything I’ve done because lying is one of my triggers and I get very anxious," the actor told the UK’s Evening Standard.

Sick Note will probably make you uncomfortable, too, but that kind of comes with the territory of watching a show about someone faking a terminal illness. Some of the best comedies have scenes that make you want to run far, far away, but that’s part of their charm. The fun of Sick Note is, at least partially, watching how far Daniel will go, and just how much he’s willing to bend the truth to stay connected to the people around him. Judging by the fact that the show is already into Season 2, he probably doesn't clean up his act anytime soon.

More like this
Nicola Coughlan Shared A Lady Whistledown Excerpt From ‘Bridgerton’ Season 3
By Grace Wehniainen, Alyssa Lapid and Sam Ramsden
Devi Is Going To Meet A “Smoldering Bad Boy” In ‘Never Have I Ever’ Season 4
By Jack Irvin and Gabrielle Bondi
The ‘Emily In Paris’ Season 3 Release Date Is Here, Plus The First Footage
By Bustle Staff
The First Clip From Netflix’s Queen Charlotte ‘Bridgerton’ Prequel
By Bustle Editors
Get Even More From Bustle — Sign Up For The Newsletter