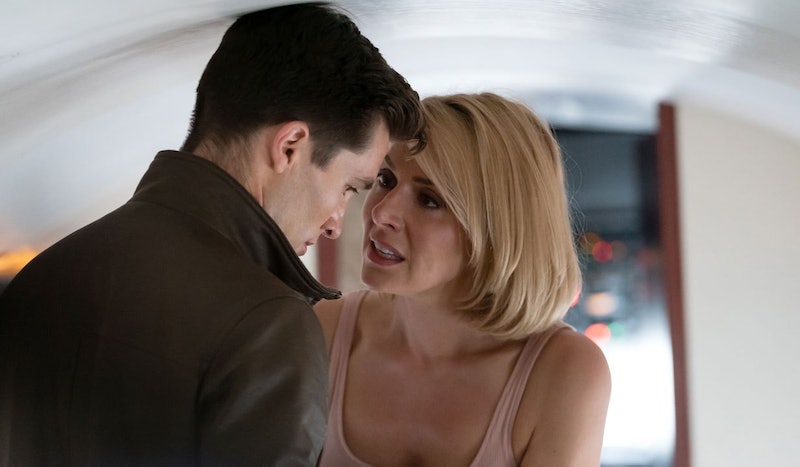 You've probably heard of the mile high club. The slang term refers to people who engage in sexual activity while on board a flight. Which is the exact concept behind Lifetime's latest movie. Deadly Mile High Club is available on the channel now, and promises some sexy scenes, scandals, and scary heights. But you might be wondering: Is Deadly Mile High Club based on a true story?

Deadly Mile High Club stars Allison Mcatee as a pilot named Tanya Jackson. After experiencing a near-fatal plane crash, Tanya becomes a flight instructor, where she immediately gets the hots for her student, Jake (Marc Herrmann). Tanya spends many extra hours teaching Jake how to fly in both the simulator and up in a two-seater plane, which is where she finally makes her move. But when Jake's wife (Anna Marie Dobbins) and mother-in-law (Diane Robbin) find out about their continuing affair, Tanya's obsession with Jake turns deadly, and she uses her flight training as a terrifying advantage.

Deadly Mile High Club doesn't appear to be based on any specific true story, but the reality of people having sex on planes is very true. according to Lonely Planet, 15% of plane passengers have said that they've engaged in sex while flying.

As neuropsychology professor Daryl Cioffi told Conde Nast Traveler, the heightened desire to do it on a plane is due to the cramped conditions on board. All those way-too-close seats and hovering people spike levels of neuropeptide oxytocin, a chemical release by the pituitary gland, the same one that is release when people snuggle or when moms cradle their new babies. "Planes are perfect," Cioffi says. "Being close to one another, and in a potentially life-threatening situation, allows us to bond more with others."

While Deadly Mile High Club might not be based on a true story — it's inspired by a sexual fantasy that is very, very real.

More like this
Gerard Butler Insisted On Adding This Pivotal Scene To 'Plane'
By Catharina Cheung
Jemima Khan Used Her Own Life As Inspo For 'What’s Love Got To Do With It?'
By Darshita Goyal
Vanessa Hudgens Is Reportedly Engaged To Cole Tucker
By Jake Viswanath
Alicia Silverstone Revives Her 'Clueless' Character In This Super Bowl Commercial
By Jake Viswanath
Get Even More From Bustle — Sign Up For The Newsletter
From hair trends to relationship advice, our daily newsletter has everything you need to sound like a person who’s on TikTok, even if you aren’t.