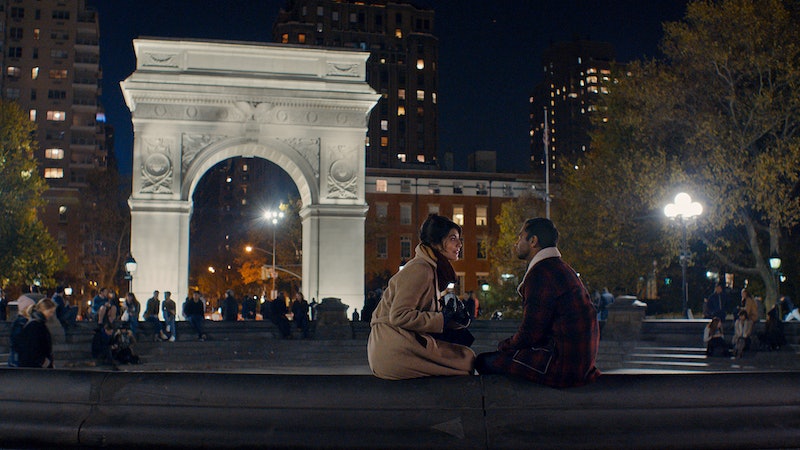 In the Master Of None episode "New York, I Love You," the show throws its traditional format out the window to tell three different stories happening across New York City. The connection through-line in these tales is the horror-film Death Castle starring Nicolas Cage. The twisted, horrific nature of the film is a sharp contrast to the very normal lives portrayed in the episode, and gives the characters of Master Of None's New York plenty to talk about — but if you're worried about having this modern blockbuster spoiled for you, you shouldn't let it hold you back from seeing an exceptional episode of television. Besides, Death Castle isn't a real movie.

Not known is much about the movie itself other than what the characters say about it. Everyone seems to be enamored with the film, which sports a 1970s horror movie poster design and an all-star cast with Emma Watson and Tyrese Gibson joining Nicolas Cage. The film, as it's discussed by the many denizens of New York, is a must-see movie with a series of major twists at the end that make it ripe for spoiler-warnings. The episode ends with many of the episode's characters enjoying the film and reacting to the film's major twist.

At the beginning of the episode, Arnold tells Dev and Denise that the film sports a mind-bending twist at the end, which caused Dev and Denise to erupt in anger. Arnold may not have revealed what the twist was — but that's not important. What is important is that there is a twist, and now the opportunity to be surprised by it has been robbed from them. But while they may be expecting one major twist, they'd never be expecting the second one.

As two women in the back seat of a cab late explain, there are two major twists in the film. It turns out that Death Castle is actually heaven, and "the black guy was really Nicolas Cage the whole time." That final earth-rocking twist is enough to shake Dev and Denise who expected a twist, "but not that!" The final revelation is even delivered in a voice that sounds suspiciously like Nicolas Cage himself. The episode's credits reveal that while the show wasn't able to get a Nicolas Cage voice cameo, they managed to book the man who may have the world's most famous Nicolas Cage impression, Andy Samberg.

The surprise at the end of the film and the nature of spoilers serves as a potent counter to the three short vignettes presented in "New York, I Love You." While the film has a big twist that everyone expects, the three vignettes all tell stories of people's expectations clashing with reality. Whether it's dealing with presumptuous tenants, trying to talk about sex with your boyfriend, or trying to go out clubbing for the night, there are no earth-shattering twists or complicated narrative. They're simple stories for which there are no spoilers, because you can't possibly know what twists and turns life will take on your most average of days. "New York, I Love You" is all about how every single person in New York has their own story worth paying attention to, even if it isn't an all-out thrill fest like Death Castle.